The GOP logic on Cuba is wrong

Want to book a flight to Cuba? There's an app for that.

Built by a private jet company, the app isn't remarkable. But it's a telltale sign of the next chapter between the United States and Cuba, as entrepreneurs and investors seek to capitalize on the rapprochement that President Barack Obama announced on December 17, 2014. Even though a window has opened for business opportunities, the door remains shut: the trade embargo, which was instituted in the early 1960s, is still in place.

Congressional Republicans have bristled at Obama's call to end the measure. They argue that the U.S. shouldn't cave to Raul Castro's regime, which openly flouts American values such as freedom and democracy. But this logic is wrong, bad for U.S. businesses, and even detrimental to our principles. 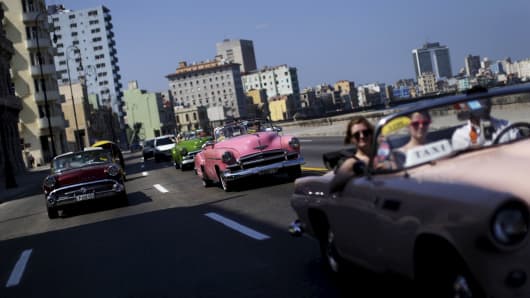 Ueslei Marcelino | Reuters
Tourists ride in a vintage car at the 'Malecon' seafront in Havana, March 16, 2016.

Here are three reasons that the U.S. should end the embargo:

1) The embargo hasn't worked. It was originally meant to isolate Cuba both diplomatically and economically. Officials in President John F. Kennedy's administration hoped that it would squeeze or even topple Fidel Castro. But Castro's regime remains in power through his brother Raul, the current president. The regime has found willing and large trading partners throughout the years such as the Soviet Union, Venezuela, and increasingly, China.

The embargo is also leaking: Since 2000, the U.S. has exported about $5 billion in agricultural goods such as poultry, corn, and soybeans to Cuba. In fact, the U.S. is one of Cuba's largest trading partners.

Obama's new policies permit U.S. banks to authorize transactions in Cuba, companies to invest in small businesses there, and insurance firms to cover people who live on the island. That the president is actively undermining the embargo will test the efficacy of another strategy — not containment but engagement.

2) Ending the embargo is good for U.S. businesses. Here's the reason that Netflix, AirBNB, Delta, and United, among other companies, want to enter Cuba — to make money. With its 11 million people, Cuba boasts the largest population in the Caribbean. And while its people have little spending power, they are well educated and healthy. The literacy rate is over 99.8 percent and the infant mortality rate is lower than the United States.

Consumer goods companies want to sell products into this large consumer base. Airliners and cruise liners are opening routes to Havana, monetizing the demand among Americans to visit the island. Hotel companies want to explore developing the many miles of virgin coast line.

All told, foreign investment in Cuba could grow from $427 million in 2011 to $17 billion in the many years to come, according to the Peterson Institute for International Economics. U.S. companies know there's a waterfront opportunity…on this waterfront.

Why is the GOP playing into Castro’s hands?

3) The embargo prevents us from spreading our values. The best ambassadors for American values are its people. That's why Obama expanded the people-to-people licenses that permitted American citizens to travel to Cuba in 2009.

Even though diplomatic relations between the two countries have been frosty for decades, Cuban and American people have participated in many a cultural exchanges. For example, the Buena Vista Social Club was the subject of an Academy-award nominated documentary in 1999 that exposed millions of Americans to the artistic traditions of Cuba.

And so it follows that U.S. companies will also be great ambassadors for America's values and ideals, habituating Cubans to choice in the marketplace, which one day may bring about demand for diversity across the political landscape. It's an experiment underway in Vietnam and China, where U.S. businesses have exposed millions to the power of free markets.

Though the embargo was supposed to contain Cuba, it also restricted the spread of American values. By ending the embargo, we will free ourselves from ourselves. And unleash our values into one of the final frontiers.

Cuba needs two things from the US now

Commentary by Kabir Sehgal, author of the New York Times best seller "Coined: The Rich Life of Money And How Its History Has Shaped Us." He is a former vice president at JPMorgan Chase and Grammy-winning producer. Follow him on Twitter @HiKabir.