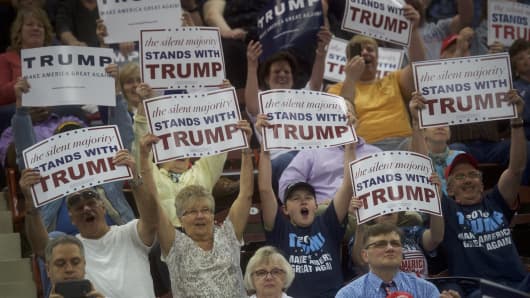 If unemployed Republicans in Tuesday's primaries vote as they have so far, Donald Trump can expect another big win in the popular voting.

That's the takeaway from a CNBC analysis of county-level primary voting data, which shows Trump has won big in counties with jobless rates higher than the national average.

That could bode well for the billionaire front-runner in the GOP primaries in Connecticut, Rhode Island, Delaware, Maryland and Pennsylvania. Some 74 of 107 counties in those five states have jobless rates above the national average of 5 percent, according to the latest data available.

To gauge how well Trump is faring with unemployed voters, CNBC looked at GOP primary results in nearly 2,200 counties in the states that have voted so far. (County-level data was not available for all states that have voted.) Of those counties, more than 1,400 had jobless rates above the national average of 5 percent.

But while Trump may be able to count on a big lead in the popular vote, the arcane rules of electing delegates — about which he has complained loudly — could work against him.

The biggest single delegate prize is in Pennsylvania, but the delegate counts are more problematic, because they're not all bound to the winning candidate.

Pennsylvania's 17 statewide delegates — party members already chosen to go to Cleveland — have to vote for the candidate who gets the most votes Tuesday — but only on the first ballot.

"You can go in there and vote for Trump, and vote for three delegates that are three votes against Trump," said Rep. Lou Barletta, R-Pa., a state co-chairman of Trump's campaign, told the Associated Press.

On the Democratic side, former Secretary of State Hillary Clinton is expected to extend her solid lead against Vermont Sen. Bernie Sanders, thanks in part to a big fundraising lead in Tuesday's five primary states.

In those states, Clinton has raised nearly $15 million, almost three times Sanders, according to OpenSecrets.org.

With 384 delegates at stake in the five states, Tuesday's Democratic primaries offer Sanders one of the last shots at gaining enough of them to maintain a credible shot at the nomination.

Clinton already has about 80 percent of the 2,383 delegates needed to win the nomination; even if she swept all five states she would still come up short. Sanders trails with roughly half of the delegates he needs; so a Clinton sweep Tuesday would make a Sanders win impossible.

Even if he does well Tuesday, Sanders would have to win nearly all of the 1,016 delegates in 11 primaries remaining before the Democrats' July convention in Philadelphia.