The Federal Reserve left interest rates unchanged — no surprise there — moving the focus to the next Federal Open Market Committee meeting on June 14-15.

The latest FOMC statement is little changed from the last one and provides no strong clue about the likely decision at the June meeting. The next indication of Fed intentions will come with the release in three weeks of the minutes for this meeting. 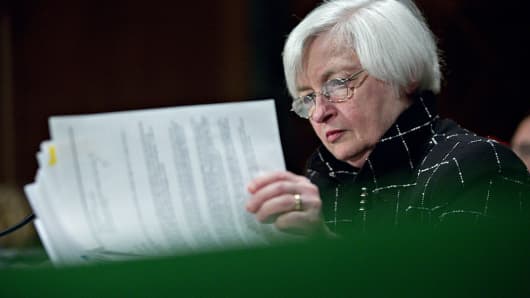 At this point, commentary by Fed officials is still suggesting two rate increases this year. That is down from a suggestion of four hikes not so long ago. For the remainder of the year, will there be two, one or zero increases in the short-term interest rates by the Fed?

As always, Fed officials will be following releases of economic data with special attention to labor-market numbers. These include numbers on jobs created, new unemployment claims, the unemployment rate and wages. At this moment, labor numbers are looking good overall and support an increase in June.

Here's what changed in the new Fed statement

Manufacturing numbers are mixed. The ISM Purchasers Managers Index is above 50 but well below its peak in 2015. Industrial production declined in March for the second month in a row. These numbers likely reflect a weak global economy and the lingering effects of a strong dollar. They signal caution and a reason to hold off on a rate hike.

The strongest argument against further rate increases comes from the financial markets themselves. An examination of the H.15 Selected Interest Rates release from the Board of Governors is instructive. For commercial banks, reserves (deposits) at the Fed and short-term Treasurys are very close substitute assets. The Fed now pays 50 basis points on bank reserves, while 4-week Treasury bills in the secondary market yield 15 basis points. Not until one gets to the 1-year bill is the yield equal to 50 basis points. Relative to market interest rates, the Fed is paying substantially too high a return on reserves. Interest rates on other assets also reflect this pattern.

Poll: When should the Fed raise rates again?

The effective federal-funds rate has flat-lined at around 36-37 basis points, within its target range of 25 to 50 basis points. The volume of federal funds bought and sold is greatly reduced, however, because of the large volume of excess reserves. Additionally, according to the New York Fed, most activity in the market is arbitrage being executed between GSEs (Government Sponsored Enterprises) and banks that has no influence on other interest rates.

There are also global headwinds. Other major central banks have pushed interest rates into negative territory. It is difficult for even the world's most important central bank to push rates up when they are falling in so many other places. Global arbitrage is pressuring U.S. rates downward.

Has the Fed lost control of short-term interest rates? Does it want to confirm the doubts about its sway over market interest rates by posting new increases in administered rates?

Buckle up: Stocks could drop 25% or more

It is likely then that there will be no rate hikes after June until the December meeting. Incoming data may shift the balance of power between hawks and doves on the FOMC. If the voting members of that body hesitate in June, however, they are likely lost for six months. If not June, then December is the earliest meeting for a rate increase.

I return to my original question: two, one or zero rate hikes this year? At this point, one hike in December looks most likely.