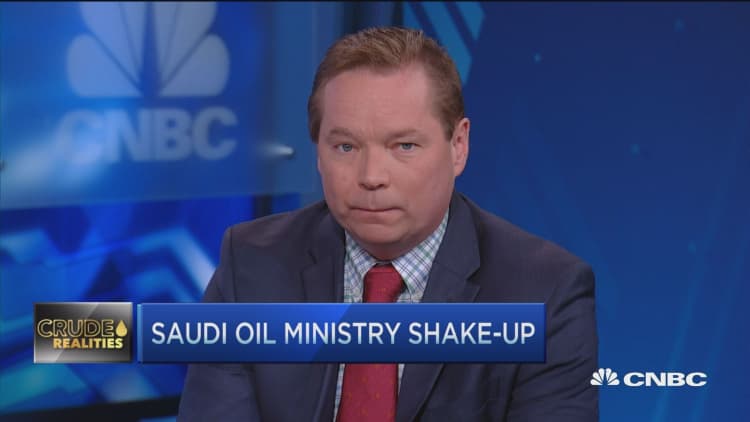 The shakeup in Saudi Arabia's cabinet this weekend that brought Ali al-Naimi's 20-year tenure as oil minister to an end is another sign the kingdom is prepared to flex its muscles in the Middle East, Again Capital founding partner John Kilduff said Monday.

"You're going to see a much more robust Saudi Arabia going forward. There's no question about it," he told CNBC's "Squawk Box."

"You're going to see more action, direct action on their part going forward. It's going to make a lot more volatility."

The majority Sunni Muslim kingdom is waging war against Shiite rebels in neighboring Yemen. The conflict has been directed by Saudi Deputy Crown Prince and Defense Minister Mohammed bin Salman, who is also guiding the country's new economic blueprint laid out last month.

That policy is also closely linked to its rivalry with Iran, which is seeking to regain market share after its crude exports were limited during years of sanctions that were recently lifted, he noted.

Power and a 'brutal' battle against Iran: What the Saudi reshuffle REALLY means

Kilduff said Al-Naimi tended to focus on the business of guiding oil markets and was content to allow the United States to do the heavy lifting in the region. He noted that President Barack Obama has called on Gulf states to take a more active role in the region, and he said that outcome will likely come to pass.

"Sort of the same ways the Israelis take care of business on their own, the Saudis aren't going to wait for us to carry the water for them any longer," he said.

The Saudis could ramp up production by about a million barrels per day as they begin to burn crude to meet electricity demands during the summer months, he said.