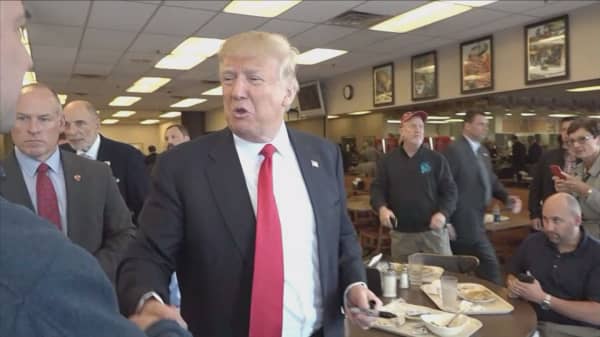 Not too long ago, the polls indicated that if the general election came down to a choice between Donald Trump and Hillary Clinton, Clinton would win in a landslide. Then Donald Trump secured the Republican nomination, large numbers of Republicans who had opposed him offered their (often grudging) support, and the polls show that he has eliminated the gap. Some polls, in fact, are now showing Trump winning the not-entirely-hypothetical matchup—and the trend is certainly in his favor.

Democrats are likely counting on Clinton getting a similar "party unity bump" when Bernie Sanders finally bows out of their race, viewing Trump's sudden competitiveness as an artifact of his having unified his party first. They are likely to be disappointed.

Contrary to conventional wisdom, Trump faces the easier unification task. First, as in most elections, the party that has been out of power for eight years is the hungrier of the two. President Obama has already given the Democrats many of the things they consider most important; their passion for transgender bathrooms simply cannot match the importance they placed on centralizing health care. 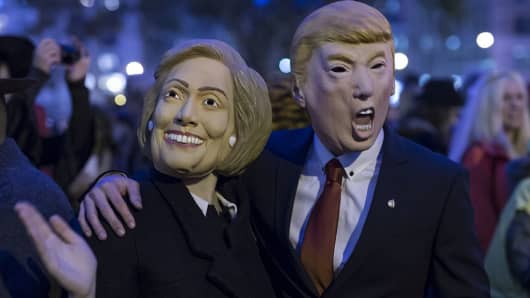 Republicans, on the other hand, have spent a long time watching Obama work against their interests and values. They are hell-bent on reversing as much of it as they can before it becomes entrenched. Republican discipline was always going to be the easier of the tasks.

Furthermore, during the primaries, Trump showed surprising strength among very conservative voters and Evangelical Christians—the two Republican factions who seem to have the least in common with a non-ideological libertine candidate. His most vocal opposition came from the party's intellectual elite, and in particular from those focused most closely on foreign policy and national security.

Trump hasn't closed the deal—WE decide who the nominee will be: GOP delegate

While Trump's alienation of the intelligentsia will continue to earn him bad press from traditionally conservative sources, it is unclear that it will hurt him much with voters. The Republican rank-and-file seems to be split between those enthusiastic about a Trump presidency and those terrified of a Clinton presidency. Neither of those groups is likely to sit at home—or switch their vote. Clinton, on the other hand, must placate the most passionate, enthusiastic, ideological elements of the Democratic Party—many of whom have spent months directing their passion against her.

The Clinton/Sanders split is instructive, particularly following on the heels of President Obama. In 2008, Senator Obama ran as as a true progressive, the voice of the Democratic future, inheriting the mantle of what Howard Dean (then DNC chair) had labeled "the Democratic wing of the Democratic Party." He defeated Senator Clinton, then running as more of a centrist. In office, Obama has delivered on his progressive promise. He has been ideological and combative, unafraid to abuse his executive authority and fully content to govern unilaterally. He has been a passionate voice for government regulation, redistributive economics, identity politics, and global warming—the pillars of modern progressivism.

How have Democrats responded? The Clinton/Sanders split shows that Obama has succeeded in moving his party so far to the left that he himself now defines its center. The animating belief of Bernie Sanders' campaign is that Barack Obama was a sellout. To Sanders and his followers, Obama has been insufficiently ideological, too accommodating to Republicans and capitalists, inexcusably timid in his exercise of executive authority, and lackadaisical in his pursuit of progressive goals.

Clinton, while running far to the left of both her husband's presidency and her own 2008 campaign, lacks both the ideological purity and the total indifference to economic logic that lie at the heart of Sanders' appeal. Clinton is visibly comfortable with Wall Street—not to mention the billionaires who have positioned themselves to profit handsomely from regulations allegedly necessary to combat global warming. She claims to respect existing American alliances and the need for a strong military. While neither a moderate nor a centrist, she is running as a pragmatist, a candidate whose candidacy makes sense, and whose goal is to lock Obama's transformative presidency in place.

Clinton, however, will have to convince her party's most passionate ideologues—people who have already demonstrated their willingness to resort to violence—to rally behind her vision of a pragmatic entrenchment of accomplishments they already consider insufficient.

All we can say is, good luck with that.

Commentary by Bruce Abramson, Ph.D., J.D. and Jeff Ballabon. Abramson is a senior fellow at the London Center for Policy Research, and director of policy at the Iron Dome Alliance. Ballabon is CEO of B2 Strategic where he advises and represents corporate and political clients on interacting with the government and media. He previously headed the communications and public policy departments of major media corporations including CBS News and Court TV. Follow them on Twitter @bdabramson and @ballabon.