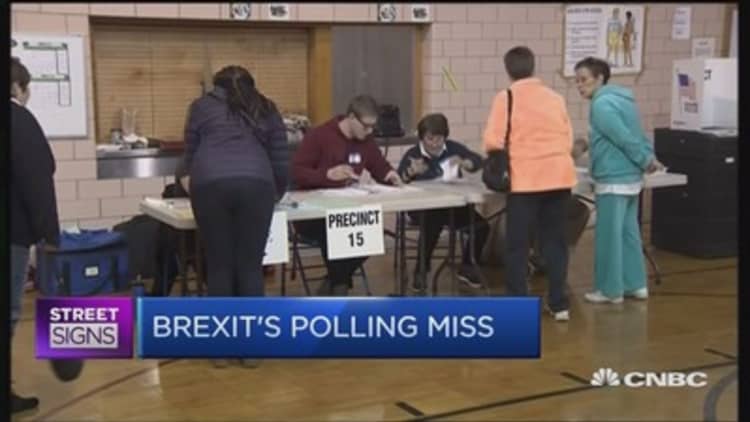 watch now
VIDEO1:5401:54
Why were polls so wrong about Brexit?
Street Signs Asia

It was a result that forced the ouster of the British Prime Minister, sent shockwaves across financial markets and raised doubts over the fate and composition of the European Union.

Just how did experts get it this wrong?

The U.K. EU referendum vote prompted a global massive market selloff as markets were priced in expecting a remain outcome. More than two trillion dollars were wiped out globally, the largest drop on record.

Leading up to voting day, the vast majority of polls predicted the remain side would prevail, however the final results gave the leave side a victory margin of more than one million votes.

According to SurveyMonkey's Chief Research Officer, Jon Cohen, young voter turnout and the death of Lawmaker Jo Cox are the likely largest factors in the discrepancy between polls and the final outcome.

"The Remain campaign was heavily dependent on support among younger voters and they simply didn't show up," Cohen told CNBC.

The murder of Cox in the days leading up to the vote, triggered new challenges in polling, even though it was difficult to determine how the tragedy would influence polling.

"After the assassination, the Remain side became more vocal and were willing to share their opinions about Brexit than were leave voters," Cohen said. "It was a very difficult environment to gauge an opinion in."

A poster featuring a Brexit vote ballot with 'out' tagged is on display at a book shop window.
John MacDougall | AFP | Getty Images

Yet many are wondering, how in an age of unprecedented information and data, could the majority of polls predict a wrong outcome.

"The polls really showed a close-in contest until the very end," Cohen clarified. "But I think we still need to dig in on what happened in those final days to show such a strong movement for Remain that ultimately dissipated on election day."

The inaccurate Brexit prediction is just one of multiple misses over recent years, including last year's U.K. general election, the Scottish referendum in 2014 and most recently during Bernie Sanders' upset over Hillary Clinton during the Michigan primary.

While polling companies have come under scrutiny, lately, Cohen says this isn't the time to dismiss polls.

"We have to learn from missteps that we've seen and Brexit is just the latest spur to get it right," he said. "But we just have to get it right, it's too important not to."