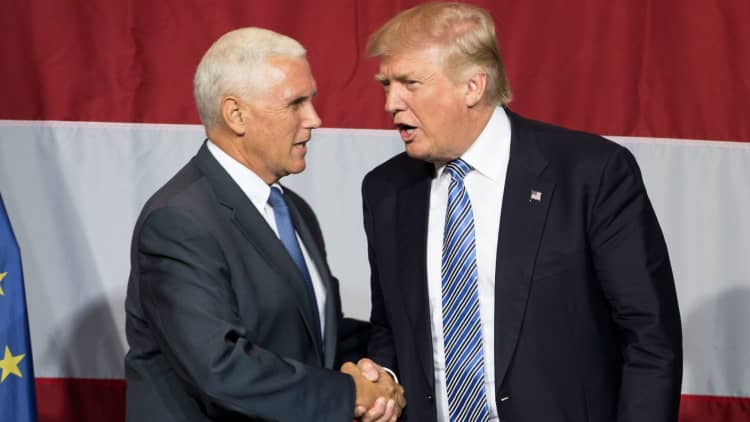 The Republican presumptive nominee made the announcement on Twitter, and Pence was quick to respond in saying he was "honored" to join Trump's campaign as his running mate.

After going back and forth between various candidates, and then delaying a previously scheduled announcement for Friday morning in Manhattan, Trump finally filled out his ticket just three days before the Republican National Convention kicks off in Cleveland.

Pence had flown into New York on a private plane Thursday, and Trump appeared all but certain to make the announcement at an event Friday morning. However, he delayed it after Thursday's deadly attack in Nice, France.

The timing of the announcement may have been forced by factors beyond Trump's control. Friday at noon was the deadline for Pence to officially file for a gubernatorial re-election bid.

Pence represents a relatively safe pick for Trump, and brings years of legislative and executive experience. Along with his current record presiding over an economic recovery in Indiana, Pence brings a number of conservative and establishment bona fides, including his time in House leadership while he was a member of Congress.

Pence has on occasion publicly disagreed with Trump, especially on such issues as Muslim entry into the country and trade, and he endorsed Sen. Ted Cruz in Indiana's Republican primary. But in recent days, he has offered praise for Trump and even campaigned with him this week.

The governor, who was reportedly favored by senior GOP leaders, brings with him political experience and connections to congressional Republicans, qualities Trump has said are a priority for a running mate. Pence also speaks frequently of his Christian faith and may allow Trump to make inroads with evangelical voters.