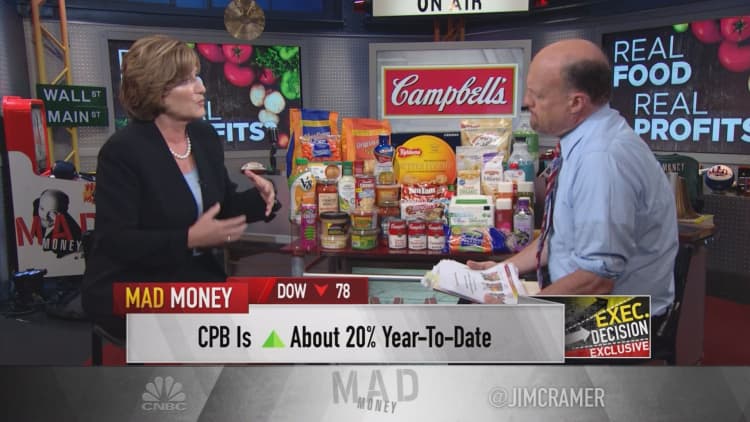 Campbell Soup Company has been on fire this year, with its stock up 20 percent, and its CEO Denise Morrison says this is just the beginning of leading a major change happening in the food industry.

According to Morrison, Campbell has been watching a change in the trend of venture capitalism, with more than 400 start-ups receiving $8 billion in VC funding since 2010.

"It's disruption going on in the whole ecosystem of food. From buy, make, sell, deliver. And it's pretty stunning. The entrepreneurial spirit has moved from the garage in high-tech, to the kitchen in food," Morrison said.

We believe that we need to participate in this, so you can either lead change or be a victim of it. I'd much rather lead it.
Denise Morrison
CEO of Campbell Soup Company

Morrison took over as CEO a little less than five years ago, and has steered the company into a major transformation. In just a short period of time, she adapted the company from a classic pantry play on soup, to a company with fresh, natural and organic exposure.

In 2012 Morrison bought Bolthouse Farms for $1.55 billion and then a year later, she purchased Plum Organics. Campbell's latest acquisition was Garden Fresh Gourmet, the No. 1 maker of refrigerated salsa in the U.S., for $231 million.

"We believe that we need to participate in this, so you can either lead change or be a victim of it. I'd much rather lead it," Morrison said.

Campbell plans to growth the company through what it calls "models of innovation." In addition to internal and external innovation, this includes interest in venture capital and M&A. Though, she says it must be a smart and disciplined acquisition.

Morrison's goal is to make food affordable and accessible to everyone. She tasked the company with strengthening its core business — which includes soup as "growth engine" of the company — while at the same time, expanding into faster growing spaces.

Campbell's new food philosophy includes food that actually has roots, recognizable ingredients and comes from plants and animals. Morrison aims to make food with care that is ethically sourced.

"Sustainability is important because we all are responsible to nourish our planet. And real food should be delicious, safe, affordable and accessible to all. All without compromise," she added.