Jewelry retailers have struggled to maintain their shine in the current economic environment.

Prices for precious metals -- including gold, silver, and platinum -- have made substantial gains this year, and retailers have had a tough time passing those costs onto customers. Not to mention high-end brands are simply not resonating like they used to as consumers shift toward value channels. All of the jewelers could be in trouble if things continue in this direction.

Reports this week from Tiffany and Signet Jewelers should highlight the ongoing difficulties in the space and offer clues about whether we can expect a turnaround in the near future.

Tiffany continues to show no signs of bouncing back. Shares are down more than 9 percent year to date and 19.5 percent in the last 12 months. Poor earnings and sales growth are to blame for the large downturn in recent quarters. Tiffany has reported negative growth for five consecutive quarters and counting.

In the first quarter, Tiffany delivered a 7 percent decline in worldwide net sales with comparable store sales declining across many of its geographical regions. Weak spending by U.S. consumers and foreign tourists were to blame for lower retail sales, while frequent discounting put pressure on margins.

Substantial downward revisions in the past three months suggest second quarter results are heading in the same direction. Analysts at Estimize are looking for earnings per share of 74 cents, down 13 percent from a year earlier. Revenue for the period is expected to be down 5 percent at $933.28 million.

Tiffany should continue to see an adverse impact from currency headwinds and weak consumer spending. Efforts to expand its omnichannel capabilities have also come with mixed results. Competition from online retailers like eBay have made it difficult for Tiffany to generate sales while maintaining respectable margins.

New store expansion remains one of the lone bright spots. A large part of Tiffany brand is built on the in-store experience rather than the online business. This rings particularly true for tourists visiting the United States. 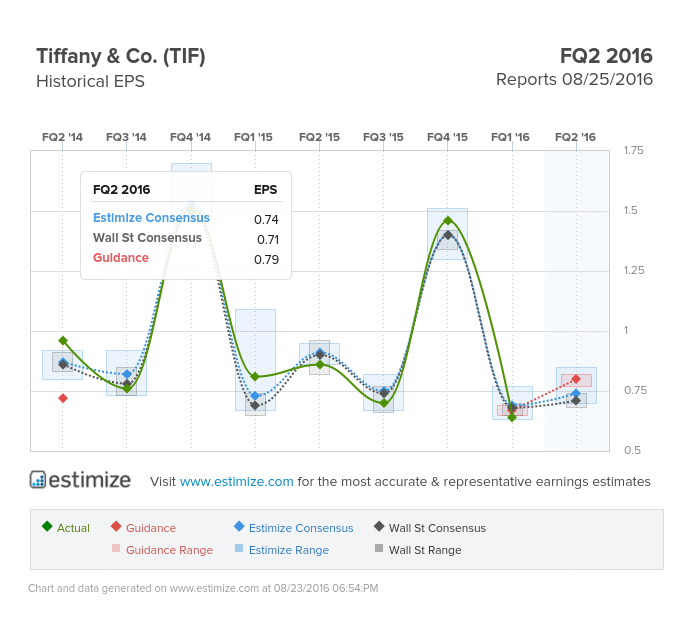 Signet Jewelers is also scheduled to report its second quarter earnings this week.

Signet has been slightly worse off than Tiffany despite delivering more modest gains. The stock is down about 23 percent year to date and roughly the same in the past 12 months. The company's financial performance has greatly decelerated recently with revenue growth struggling to remain positive.

Transactions across its mall-based brands Zale's and Piercing Pagoda have struggled thanks to a weak merchandise mix. Meanwhile, Jared's and Gordon's Jewelers continue to print abysmal same-store sales as mall traffic wanes.

However, revisions activity has been trending up in the last month, suggesting a potential surprise around the corner. Analysts are calling for earnings per share of $1.48 on $1.47 billion in revenue, according to the Estimize consensus data. Compared to a year earlier, this reflects a 13 percent increase on the bottom line and a 3 percent jump on the top line.

Several institutions have maintained a buy rating on the stock with price targets well over its current share price of about $95. 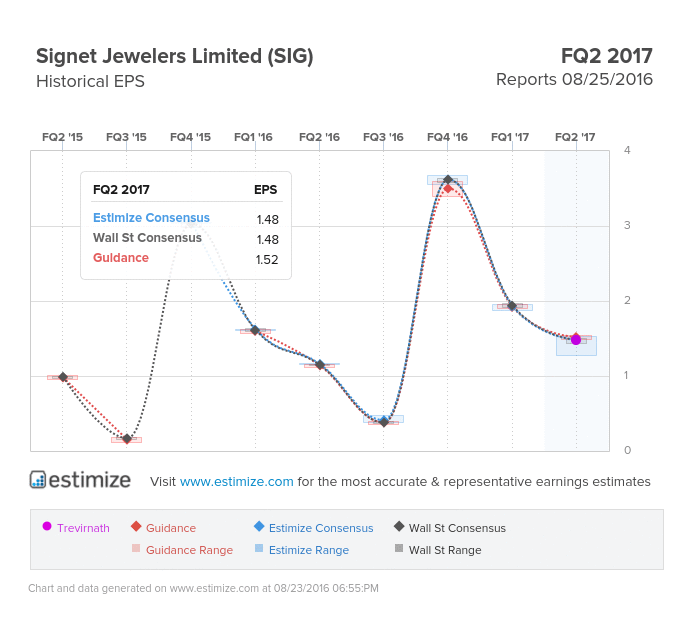 Until Tiffany's and Signet can instill new confidence into the market, investors are wise to remain leery of both stocks.

How do you think these names will report this week? Be included in the Estimize consensus by contributing your estimates here.