James Altucher has founded 20 different companies (at last count), ranging from hedge funds to dating websites. He has sold a few for $10 million or more but admits that most of his ventures have failed.

This guy has risen from the ashes so many times he'd make a phoenix jealous.

But failure isn't as glorious as that analogy might paint it. It's a gritty, dirty, a bottomless pit.

"Failure really sucks," Altucher said. "When you fail it's not like you say, 'OK, I failed now. I'm here at the bottom.' There's no bottom. It feels infinite. It feels like it's never going to end. It's just going to get worse and worse."

But, Altucher, who has been called "the Oprah of the internet" for his sage advice, explains that you can't just get sucked into sitting at the bottom and wallowing in it.

"I know from experience that if I keep on living a healthy, honest good life that things will bounce back. I have to remember that every time I've been in these situations before, better things have happened as a result. So you instantly don't fail once you feel that way."

Despite being a successful entrepreneur, investor and author, Altucher now chooses to lead a minimalist lifestyle: He doesn't have a home. He lives in random places through Airbnb. He only owns 15 things, including a laptop, iPad and three sets of chinos.

The New York City loft he's living in right now has what can best be described as a go-go dancer cage. It's the first thing I saw when I stepped off the elevator. It's in the middle of the apartment.

"Do you want to get in?" James asked.

The cage felt like a familiar place that I put myself in after every time I fail. I was only in there for a minute – but it was a very long minute. 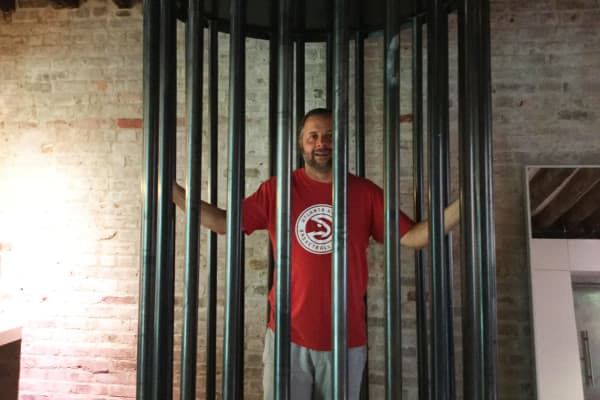 Altucher eventually let me out of the cage and we chatted for 90 minutes. A conversation with him can really span the gamut: We talked about everything from family court to Spanx, Ohio University, networking, the word "because," badminton and failure.

I'll spare you the Spanx talk. Here are the 7 things I learned from James Altucher about failure – things that help you learn, grow and move on, not stay locked in a cage feeling sorry for yourself.

Just admit it.
"I started a hedge fund and it didn't work out. One of my investors was calling me constantly and I never returned the call," Altucher said. "Finally he caught me and said, 'Look I'm pulling my money-- not because you're failing (poor performance) but because you won't return my calls."

Of course, it sucks to admit you failed. But just get over yourself and do it. Accountability represents honor and integrity and it's the only way you're going to get a repeat investor – not by dodging their calls when you're holding their money.

You wanna try that again?
Ninety percent of your well-being depends on how you choose to deal with a situation rather than the situation itself. So frame your failure. I explained that I'd written a novel in 2010 that was rejected by 12 publishers. It felt like a failure. Altucher told me to reframe it.

So, I said, "I wrote a book that helped me stay sober, got me a literary agent and opened the door for me to write 'The Buy Side,' which became a New York Times best-seller."

Life is more like tennis than biology.
Altucher's daughter was getting really frustrated while practicing tennis. She couldn't get the serve in every time. He asked her what grade she was getting in biology class. She said she had a 102 average. That's not real life, he explained. Tennis is teaching you more about real life than biology.

Baseball players make the Hall of Fame if they get a hit 1 out of every 3 at-bats. You have to get used to a real-life batting average – which would be much lower than that. "Most of the time, what people call failure is just normal life," Altucher said.

Even if you wind up in jail …
"You can consider life as a series of failures punctuated by some successes," Altucher explained. "You can always focus on those punctuations and transform what seems like a failure into a normal situation where things get worked out." Some people might not agree—what if you go to jail? "Well, most people I know who went to jail get to read a lot and get in really good shape. When they got out they were able to transform their lives."

"Failure really sucks. When you fail it's not like you say, 'OK, I failed now. I'm here at the bottom.' There's no bottom. It feels infinite. It feels like it's never going to end. It's just going to get worse and worse." -James Altucher

Just do it. (Fail.)
In 2008, we didn't know if capitalism was going down the tubes or not. Prices were plummeting before we even knew what was happening. And no one could handle the uncertainty. But guess what? It was happening, no matter how hard we white-knuckled it. Sometimes, your only option is to let failure happen. At least then, you have an idea where the floor is and you can start to rebuild.

Make the metaphor.
"If I sit down to play you in chess, I'm afraid to lose. But if I do lose, I know I'll come back, study the game and try to improve," Altucher said. He's played tens of thousands of games of chess but only started a few dozen companies. It's a much larger pool of experience to draw from.

"If I fail at business, I know what to do because of how I come back from losing at chess. I make the metaphor."

So, the moral of the story: Get a hobby where you can fail. Then write your own metaphor.

Stop failing at failing.
Recently I've been feeling like I'm stagnating. I'm just not as productive as I'd like to be. I've been taking fewer shots on goal and not scoring. It sucks.

What I realized from talking with Altucher is that I'm simply not failing enough. I am failing at failing. Man, Altucher is so much better at failing than I am!

So, if you're having a hard time finding success, you know what to do: Get out there and start failing. Immediately!

Commentary by Turney Duff, a former trader at the hedge fund Galleon Group. Duff chronicled the spectacular rise and fall of his career on Wall Street in the book, "The Buy Side." He is a commentator on CNBC's "Filthy Rich Guide" and a consultant on the Showtime show, "Billions," starring Damian Lewis and Paul Giamatti. Follow him on Twitter @turneyduff.