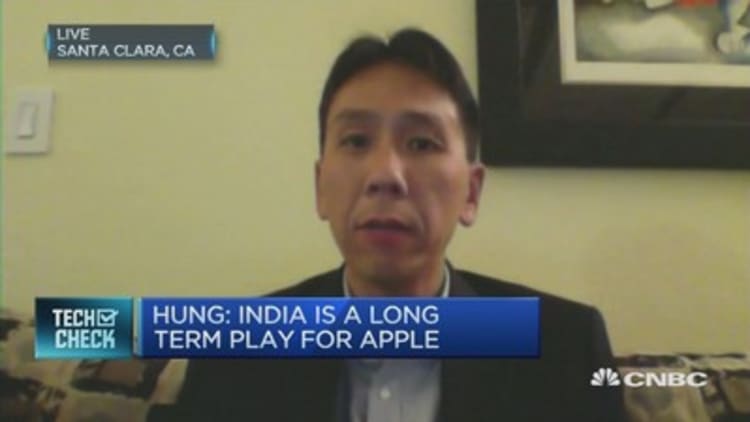 The iPhone 7 and 7 Plus will make their Indian debut on Friday, ahead of the country's gift-giving season, as Apple faces an uphill battle to take market share from rivals in the largest South Asian economy.

"The biggest challenge for Apple today is that the tariffs that India imposes on imported phones greatly increases the pricing of iPhones in India," Hung said, adding that in the first half of 2016, the company shipped slightly over a million iPhones in India.

The suggested retail price Apple tagged to the iPhone 7 handset began at $649. Adding in India's import taxes, the final price for the basic iPhone 7 model would go up to $900, according to Hung.

That meant the iPhone 7 costs more than half of what an average Indian earns in a year, though with a large population, the income disparity around the country was likely to be much greater.

Earlier this year, Apple introduced the iPhone SE, a relatively lower-priced model aimed at emerging markets, but analysts said it failed to make a significant dent in the Indian market.

Currently, India has one of the fastest growing smartphone markets in the world.

Research from International Data Corporation in August showed that for the April-June quarter, there were 27.5 million devices shipped in the country, a 17.1 percent jump from the previous quarter and a 3.7 percent uptick from a year earlier. It was a stark contrast to the anemic 0.3 percent on-year growth in the global smartphone market for the same period.

The Indian market has been dominated by Apple's global rival Samsung, local brand Micromax and a slew of Chinese manufacturers, such as Xiaomi, Lenovo and Huawei, which have improved their phone quality, while offering a much lower price than the iPhone.

Some smartphone makers have also circumvented some of India's import tariffs by investing in manufacturing bases in the country so that they could sell directly to customers there.

In September, Reuters reported that Huawei will start making smartphones in India starting in October in the city of Chennai. In 2015, Xiaomi teamed up with Taiwanese manufacturer Foxconn to assemble phones in India.

Hung reckoned the key next step for Apple would be to open up Apple stores in India and sell refurbished iPhones at a much lower price to build up the iOS ecosystem in the country.