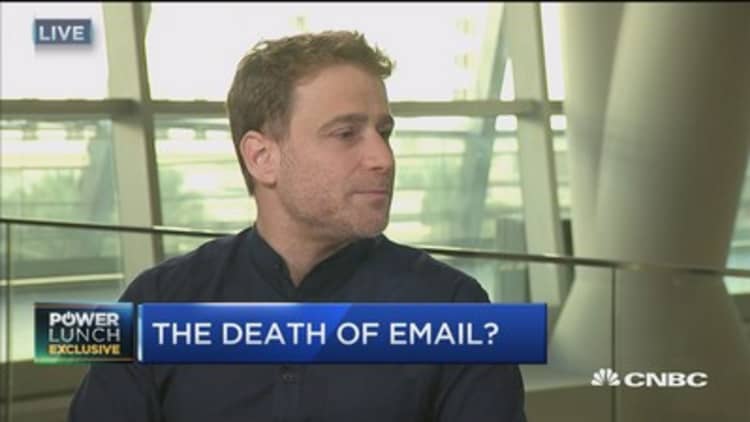 Despite earlier reports that it might go public in 2017, it will probably be years before Slack files for and initial public offering, the CEO said.

"Public markets seem friendly...to cloud-based [software as a service] businesses like ours," Stewart Butterfield, CEO and co-founder of Slack, told CNBC's "Power Lunch" on Wednesday. "And we've been trying to run the business with the discipline that would required to be a public company, but frankly, it's going to be a while for us, just because we're growing so quickly."

Butterfield said last year that the the company "started an internal campaign for IPO readiness" and that the earliest it could go public would be in mid-2017, according to an interview with The Australian.

But since then, the IPO market has been sparse, with 89 IPOs priced so far this year, a 41.8 percent decline compared to last year, according to Renaissance Capital. Shares of fellow software and cloud services providers like Nutanix and Twilio have fallen since their blockbuster 2016 IPOs.

"High growth is great, and we like it, we want to keep it," Butterfield said. "But it does make it harder to predict where we're going to be a year out."

Slack, a unicorn start-up that makes a workplace chat program, helps companies retrieve valuable information that stems from spontaneous conversations, according to Butterfield. Many companies, like Microsoft, Salesforce, and Facebook, have shown interest in the area of business communications, but Butterfield said he welcomed competition.

"It's an interesting time for us, because right now we don't really have any competition," Butterfield said. "Which is great but it's also a bit of a challenge, because people don't understand what it's for. So if you ask our customers, 'What did you use before Slack?', 80 percent of them say, 'Nothing.' Like they don't think about it as a category. We have a lot of education to do, and actually competition would help with that."

Unlike email, Slack increases internal transparency by giving many people access to conversations — no one is cut off by an empty inbox, Butterfield said. Still, he doesn't see Slack as an email killer, he said.

"I think email's going to be around for like another 10,000 years," Butterfield said. "It's a great way to cross organizational boundaries."