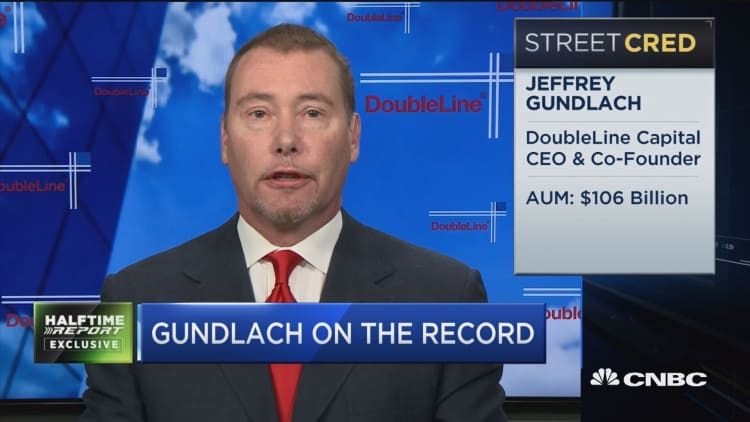 Donald Trump's stunning victory for the White House may mark the long-awaited end to the more than 30-year-old bull run in bonds, as bets on faster U.S. growth and inflation lead investors to favor stocks over bonds.

A two-day thumping wiped out more than $1 trillion across global bond markets worldwide, the worst rout in nearly 1-1/2 years, on bets that plans under a Trump administration would boost business investments and spending while firing up inflation.

"We've had a sentiment shift in the bond market. We've seen it, too. People have already started reallocating out of bonds and into stocks, said Jeffrey Gundlach, chief executive officer of Los Angeles-based DoubleLine Capital, which has more than $106 billion in assets.

"The cracks have been forming for five years were in this slow-grinding higher phase in yields, he said.

The stampede from bonds propelled longer-dated U.S. yields to their highest levels since January with the 30-year yield posting its biggest weekly increase since January 2009, Reuters data showed.

In the stock market, the blue chip Dow Jones industrial average finished out its best week in five years on Friday as it marked a record high close.

Bank of America/Merrill Lynch's Global Broad Market Index fell 1.18 percent this week, the steepest percentage drop since June 2015, which is equivalent to more than $1 trillion. Its U.S. Treasury index suffered a 1.91 percent decline on a total return basis, the biggest weekly drop since June 2009.

Many investors, who have loaded up on bonds on the belief of protracted easy monetary polices worldwide due to sluggish global economy, are not ready to throw in the towel.

They are counting on insurers and pension plans, together with European and Japanese investors who are struggling with negative yields at home, to preserve the bull run for bonds.

"Are we going to see a dramatic backup in yields? It's too soon to make a conclusion about that," said Mihir Worah, chief investment officer in asset allocation and real assets at Pimco in Newport Beach, California, which manages $1.55 trillion in assets.

Goldman Sachs and BAML forecast the 10-year U.S. yield could climb to 2.50 percent, compared with 2.11 percent at Thursday's close. The U.S. bond market was closed on Friday for Veterans Day.

Fund managers at top bond firms and analysts on Wall Street are weighing whether the impact of Trump's win on financial markets will be similar to Brexit. European stocks sold off violently after the Brexit vote, but by mid-August had recovered all the losses. Even so, there is a great deal of uneasiness as investors wait for details on how Britain will exit the EU — not unlike the waiting game on what Trump will actually do as president.

"We need more of a cushion given the uncertainties. That's exactly what is being played out in the global debt market," said Mark Lindbloom, portfolio manager at Western Asset Management in Pasadena, California, which oversees $445 billion.

Trump, who beat Democratic rival Hillary Clinton, campaigned on tax cuts, trade restrictions and fiscal spending on infrastructure. It remains unclear how these promises translate into policy and the degree to which they would affect the economy.

Since Election Day, the U.S. bond market's gauge on investors' 10-year inflation outlook jumped to its highest level since July 2015.

Bond and stock markets suggest whatever Trump may do with the help of a Republican-controlled Congress would give a lift to the U.S. economy, which is growing at about 2 percent this year.

"It is a bit early to be calling the Big Rotation," said Art Hogan, chief market strategist at Wunderlich Securities in New York, referring to the idea that the three-decade-old rally in bonds is ending.

"We've been declaring that rotation for years. ... I'm afraid its hard to think about that happening in the current demographics we have. Baby boomers have more investable assets than millennials do."

Betting the U.S. economy may fare better on possible tax cuts and more federal spending, investors scooped up financial and biotech stocks, driving the S&P 500 to its best week since 2014 on Friday.

For a rotation into equities from bonds to materialize, it would require a pick-up in the global economy, and for central banks globally at the very least to halt accommodation and in our case remove some, Hogan said.

While investors dumped most types of bonds after Trump's victory, they piled into Treasury inflation-protected securities as a hedge against a pick-up in inflation.

"You are seeing interest in TIPS right now from a widening investors base," said Brian Smith, portfolio manager at TCW in Los Angeles, which has $197 billion in assets.

Trump's win dovetailed with a rise in U.S. yields, reversing the safe-haven trade that stemmed from fears over the fallout of Britain's vote to leave the EU.

Yields have also risen as some Federal Reserve officials reasserted calls for a rate increase by year-end, a move that is increasingly seen as likely by the market.

Inflation concerns have also been stoked by a recovery in U.S. oil prices, which tumbled to a 12-year low in February due to concerns over a supply glut. That is seen as another factor behind the rise in bond yields.

"The trend was already in play and it has accelerated," Pimco's Worah said, adding there is more room for yields to rise but not much further from current levels.