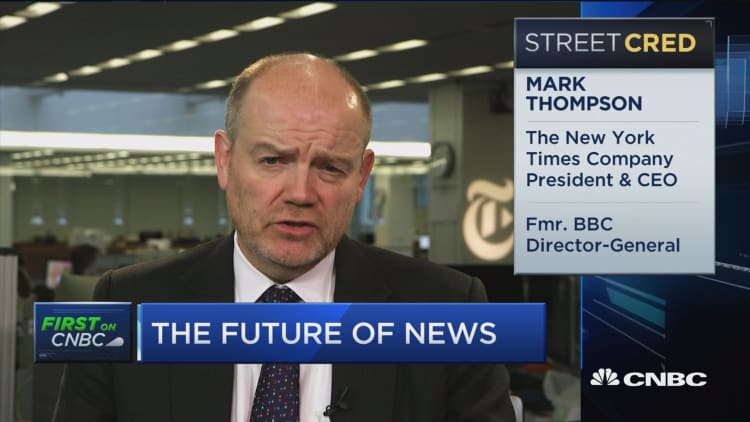 From the election on Nov. 8 through Saturday, the Times has seen "a net increase of approximately 132,000 paid subscriptions to our news products," the media giant said in an exclusive statement to CNBC.

"This represents a dramatic rate of growth, 10 times, the same period one year ago," according to the statement issued ahead of a CNBC interview Tuesday with New York Times CEO Mark Thompson.

Thompson told CNBC's "Squawk on the Street" that he does not know whether these new subscribers will stay long term after the election excitement dies down.

"Overall, we're seeing [less] churn for the time. So the number of people net leaving the Times is reducing over time," Thompson said.

Addressing Trump's references to The New York Times as "failing," Thompson said: "Far from failing, we're seeing remarkable response" for the kind of journalism at the Times.

The most recent dust-up with Trump came last week, when the GOP president-elect tweeted on the morning of Nov. 22 that he had canceled a planned meeting with the Times.

I cancelled today's meeting with the failing @nytimes when the terms and conditions of the meeting were changed at the last moment. Not nice

Later that day, Trump tweeted the meeting was back on.

The meeting with the @nytimes is back on at 12:30 today. Look forward to it!

In the on-the-record interview that finally took place with Times reporters and editors, Trump spoke on many topics, including that he did not intend to press an investigation of Clinton over emails and was keeping an open mind on whether to pull out of the Paris climate change accord.

Trump is giving mixed messages about the Times in his statements, said Thompson, who's been CEO for four years this month. He previously was director-general of the BBC.

"Last Tuesday was a day that began with the president-elect tweeting about the 'failing' New York Times. He certainly left us after we had lunch with him, talking about The New York Times as 'an American jewel, a world jewel,'" Thompson said.

Thompson said he asked Trump last Tuesday about his threats to harden the nation's libel laws and whether he's committed to the First Amendment.

"He said, firstly, that someone had told him if he hardened the libel laws he might get sued a lot himself. And he finished by saying, 'I don't think you'll have anything to worry about,'" Thompson recounted.

"He had words of assurances in terms of freedom of speech. Again, that assurance is good to have, but let's watch and wait and see what happens," Thompson said.

The Trump rally in paid subscriptions at the Times also came despite its editorial board's September endorsement of Democrat nominee Clinton for president.

The Times did report extensively on Clinton's email scandal.

"It's the fundamental task of the New York Times to hold all public figures, including the president-elect and when he becomes President Donald Trump, to account without fear or favor," Thompson said.

"We reach vast audiences in America. We're reaching about half of everyone who touches the news on ... the web," he said. "We've got around 125 [million] to 130 million users every month."

The Times is not the only media group benefiting since Election Day.

At The Wall Street Journal, orders and new subscribers were up 300 percent on Nov. 9, versus an average Wednesday. The wsj.com website saw uniques on Election Day and the day after deliver "the highest volume since February 2014, amounting to a 45 percent increase from the previous record, despite keeping the paywall up."

Disclosure: CNBC has a content-sharing partnership with The New York Times.

Correction: The story was revised to correct in the headlines that the tenfold increase was in subscription growth.