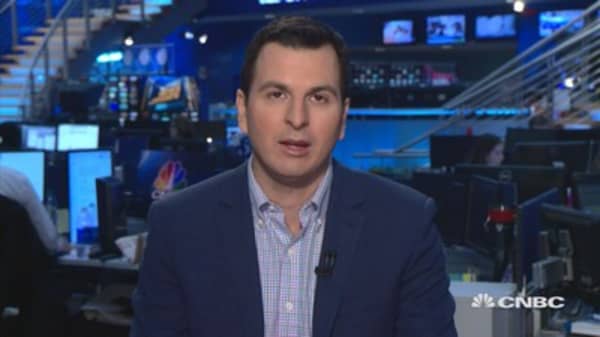 A month ago, Donald Trump surprised markets with a stunning upset over Hillary Clinton. Even more surprising? The market reacted by going gangbusters.

Before ballots were cast, financial experts and investment gurus alike had plenty of advice on which stocks would profit off a Trump victory. The common refrain was that the market would tank on a Trump win. After all, the market hates unpredictability, right? With an unconventional candidate who spent the campaign reneging on previous statements and making unlikely promises like building a wall along our southern border, investors didn't know what to think.

Many observers said the market would likely crash on a Trump win, and they advised investors to protect themselves through investments in things like gold and consumer staple companies. In fact, however, over the last month the consumer staple sector has fallen 3 percent, while the market as a whole is up near 5 percent. Gold is down about 8 percent over the same period. Buying anything other than those "stable" parts of the market would have earned profits.

Even investors who were sure the market would rise didn't realize it would rise as much as it did. "I did buy a fair amount, I guess in perspective, but not nearly what I should have," activist investor Carl Icahn told CNBC's "Power Lunch" on Thursday.

Here's a selection of how professional pickers did in forecasting what turned out to be the post-election "Trump bump."

Who got it wrong

Let's start with the obvious: Markets overall didn't drop. In the past month, investors have pumped $2 trillion into stocks globally, according to Bloomberg data. But market observers thought because Trump was such an unknown, investors would react by dumping risky assets and clinging to safe positions.

JPMorgan, Barclays, Citi, Bank of America: Those are just a few of the big-name shops that all said equities would fall. In September, Mark Cuban told Fox News that there was "no doubt in my mind the market tanks" if Trump won. (This Wednesday Cuban seemed to backtrack a bit, telling CNBC that Trump is "our No. 1 draft pick.")

Ethan Harris, head of global economics at Bank of America Merrill Lynch, said in early November that he saw fear of a Trump win in market movements at the time. "From the action in the stock market, the equity market is worried about a Trump victory, about the uncertainty of policy under Trump," he said. "Normally the equity market responds positively to a Republican doing well in the election. In this election, I think the dominant story is about uncertainty after the election."

The normal safe havens have proved anything but in the past month. Gold in particular was cited by a number of analysts as a good spot to be in order to weather whatever Trump-related volatility lay ahead.

"I think gold will be one of the most active, reactionary instruments to a Trump win," Boris Schlossberg, managing director of FX strategy at BK Asset Management, told CNBC's "Trading Nation." "That will create a massive amount of volatility, a massive amount of uncertainty in global markets, and in geopolitical terms."

Even some "safe" stocks have been anything but. 24/7WallSt.com called out big-brand companies like Colgate-Palmolive and PepsiCo — both consumer staples — as good places to hide cash. Colgate derives a significant portion of its revenue from so-called developing economies, so it's less exposed to temperamental U.S. consumers. It also increased dividends by 3 percent earlier in 2016, according to the site. Since Nov. 8, the stock has underperformed the S&P 500 by around 10 points.

Pepsi is in a similar boat: Some 45 percent of its revenue comes from outside the U.S. and the stock is trading below targets. Still, the consumer staple has fallen 6 percent in the past four weeks.

Who got it right

While most analysts didn't see the Trump victory coming, some had it right about what Trump would mean for markets.

CNBC's own Jim Cramer said on Nov. 7 that a Trump win could mean bad things for Kansas City Southern, the company that operates the main railway connecting Mexico to the United States. Disruptions to business in Mexico or to U.S. companies with south-of-the-border operations could seriously affect KSU's livelihood.

Indeed, KSU gave up more than 10 percent in the days after the election and is still down 7 percent from early November.

If Trump does try to build a wall along the border, it's going to take a lot of concrete and logistics. Savvy investors might have loaded up on construction stocks like the PowerShares Dynamic Building and Construction ETF. That's up a full 16 percent since Election Day, beating the broader S&P 500 by more than 10 points.

James Mackintosh, writing in The Wall Street Journal on Nov. 2, said that if Trump does what he was promising to do, the country would likely face inflationary forces and more government debt, both of which would push up bond yields. Indeed, the yield on the 10-year Treasury note rose from 1.88 on Nov. 8 to 2.34 on Dec. 7.

So what's ahead? According to Peter Navarro, a senior policy adviser to Trump, we can expect the Dow to hit 25,000. Considering that the index broke the 19,000 ceiling a few weeks ago and is steaming toward 20,000, that seems possible.

Stocks may not love uncertainty, but the reaction to Trump's win shows there's still potential for exuberance in the market.

Before the election, Matt Maley, an equity strategist at Miller Tabak, was a little more zen about things, saying, "No matter who wins, the sun will rise on Wednesday, people will go to work and the markets will open."