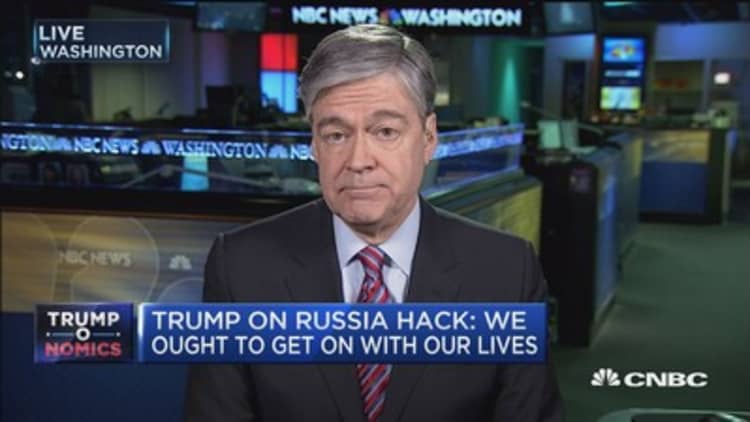 Trump said the deal "was done through" SoftBank CEO Masayoshi Son, a Japanese billionaire and technology investor. Earlier this month, Trump and Son announced in New York that SoftBank had agreed to invest $50 billion in the U.S. and aimed to create 50,000 jobs.

While Trump made a point to announce the Sprint job creation, those positions are part of the previously-announced deal with SoftBank, a Sprint spokesman told NBC News.

"The 5,000 jobs announced today are part of the 50,000 jobs that Masa Son [Masayoshi Son, founder and CEO of SoftBank] announced a few weeks ago, but these jobs will be funded by Sprint," the Sprint spokesman said.

SoftBank owns about 80 percent of Sprint and earlier this month invested $1 billion in OneWeb, a U.S. satellite venture that aims to provide affordable internet. Son said at the time that the OneWeb investment was the "first step" in his commitment to Trump.

Trump earlier claimed the SoftBank investment was a direct result of his election. However, the $50 billion will come from a previously announced $100 billion investment fund set up with Saudi Arabia, according to Dow Jones, and SoftBank has a long history of investing in the U.S.

Trump again claimed Wednesday that the jobs were a result of his election.

"Because of what's happening and the spirit and the hope, I was just called by the head people at Sprint and they're going to be bringing 5,000 jobs back to the United States and taking them from other countries," Trump told reporters Wednesday at his Mar-a-Lago resort in Florida. "They're bringing them back to the United States and Masa and some other people were very much involved in that so I want to thank them. And OneWeb, a new company, is going to be hiring 3,000 people and that's very exciting."

It is not clear exactly from where the Sprint positions will be moved. The company said in a statement that the jobs will support a "variety of functions" like customer care and sales. It added that it will start talking to business partners, states and cities to determine the locations for the jobs.

On the campaign trail, Trump repeatedly urged companies to keep jobs in the United States, arguing that his predecessors helped to push positions abroad through what he called bad trade deals and regulations. He previously announced a deal with United Technologies unit Carrier to keep some of the jobs it planned to move to Mexico in Indiana.

Carrier said Indiana agreed to give it $7 million in financial incentives over multiple years to keep some operations in the state, while it will still close a separate facility and move 700 jobs to Mexico. The deal also prompted concerns that Trump would intervene with companies on an individual basis and potentially pick winners and losers.