At a rally in Iowa last month, Donald Trump revealed a little more about his $1 trillion infrastructure plans. "My administration will follow two simple rules," he said. "Buy American and hire American."

That's surely welcome news for the many U.S.-based construction, engineering and architecture firms who are salivating over the massive stimulus that may soon be coming their way.

It's also good news for their investors, who could see equity gains climb higher as some of that $1 trillion in funding starts making its way into company coffers. Indeed, infrastructure stocks have climbed since the election, with the MSCI USA Infrastructure Sector Capped Index up nearly 7 percent since Nov. 11, days after Trump was elected.

While some stocks have already experienced large post-election gains — gravel companies Vulcan Materials and Martin Marietta Materials are up 4 percent and 11 percent, respectively, since the election, for instance — investors are still waiting to see exactly how these dollars will get doled out and to whom. Other companies, though, will ultimately benefit, said Pete Santoro, who runs Columbia Threadneedle Investments' Global Infrastructure fund.

"It's possible to get double-digit returns annually on infrastructure on almost any forecast," said Santoro, who adds that companies won't just benefit from America's plan but from massive global infrastructure needs as well. "The stars are aligned for those kinds of returns."

It's still unclear how that $1 trillion will work its way through the economy and, eventually, into shareholders' hands. One option is to hand over some of that money to cities and states to fund projects, and these governments would hire the companies to do the work. Charles Lemonides, founder of ValueWorks, a New York-based investment firm, thinks we'll see a "fairly classic spend" on transportation infrastructure — spending on roads, bridges and other more traditional types of projects. That's why those gravel companies performed well after the election.

Based on what's been said, though, Santoro thinks that the government might develop tax credits for private-sector companies to more easily finance projects. That would also make it easier to generate a positive return on those investments as it becomes much cheaper for companies to participate. It doesn't force Trump to raise government debt levels, either.

"If a company can get a large tax credit, then they can make more money, give people more jobs, and then those people will pay taxes and that will trickle back into the U.S. and fund that tax credit," Santoro said. "In theory, there's a belief that $1 of investment in infrastructure would generate $3 or $5 for the economy. There will be a multiplier effect."

Either way, companies will benefit. Investors, though, must figure out which ones will get the biggest boost. 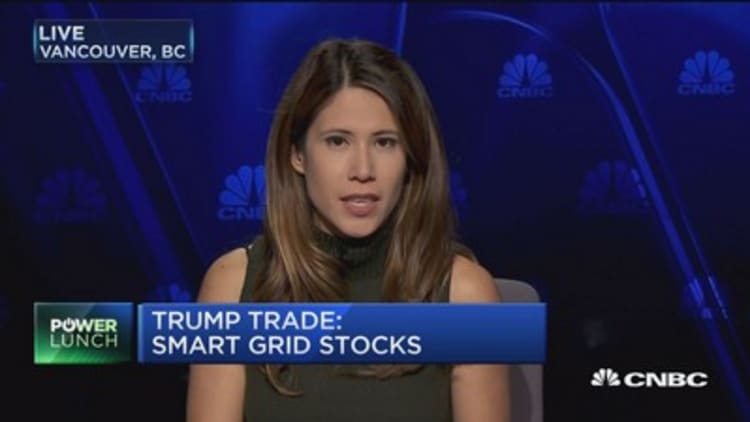 Most initial infrastructure dollars tend to go to bridges and roads, and with the American Society of Civil Engineers saying $3.3 trillion is needed to repair and replace these assets, it's these kinds of projects that will be high on the to-do list.

Beyond the more obvious infrastructure items, Trump has also commented on the need to repair the nation's airports, specifically New York's LaGuardia, which he called "Third World." The Flint water crisis has also shown how important it is to fix America's water and wastewater treatment infrastructure. "Some water pipes are still made of wood," said Santoro, who thinks water infrastructure is going to be a major theme across the globe over the next several years.

Energy infrastructure projects, such as pipelines, also benefit from a Trump presidency, said Lemonides. This is more of a result of the president-elect's pro-energy policies than stimulus, but if his spending brings more economic growth, then that's good for the oil patch. "If the economy is growing because of fiscal spending, then we could see energy use, demand for energy and then energy exploration go up," he said.

With demand for infrastructure rising not just in America but abroad as well, valuations on some of these companies have climbed. For instance, the S&P 500 industrials sector, which includes railroads, steel companies, energy services and other infrastructure-related businesses, was trading at about 1 times discount to the S&P 500 in early 2015. It's now trading at a 0.6 percent premium. But Santoro thinks that many are still attractively valued when looking at future earnings.

He thinks companies could see better earnings expansion as the dollars start flowing. So while some operations look expensive based on current earnings, if you factor in more infrastructure spending, the valuations don't appear as high. "From that standpoint, there are plenty of opportunities to find reasonably valued companies that will benefit from this movement," he said.

Still, Lemonides said to be careful of companies that have jumped in price. "You want the ones that haven't exploded on the upside," he said.

Overall, though, companies across numerous sectors should eventually see some sort of earnings uplift, said Mitchell of Sprott Asset Management. Cement, steel, energy, electricity and financial firms all have a part to play in rebuilding America's crumbling assets.

"There's no end to the sort of second or third derivative companies that will benefit," he said. "But first it'll be companies that can help build, renovate and get started on new infrastructure projects."

In the energy infrastructure space, a business such as Williams Company, which owns and operates pipelines, will be a big beneficiary, said Lemonides, as will equipment makers, such as National-Oilwell Varco, which sells drilling tools.

It's currently trading at $38 a share, or about six times 2014 earnings, which was its best earnings year. The company should beat those earnings by 2020 and could get to as high as $90 a share, he said. "These are going to go from being completely unloved investor scapegoats to getting more investor interest," he said.

On the water front, which is more of a longer-term infrastructure play, investors might want to look at Xylem, said Santoro. It provides transportation, water testing, water pumps and other water infrastructure products and services. "They address the full water cycle," he said.

It's currently trading at 22 times 2017 earnings. While that's higher than the 20 times it's traded at, on average, over the last three years, Santoro thinks that it has above-average earnings growth potential for this year and next compared to its peers. And compared to other companies in its sector, which have also seen valuations rise, it's undervalued. "Its relative valuation among industrials that will benefit from a better growth environment is quite attractive," he said.

Investors will have to wait before earnings filter to the bottom line. It's unlikely we'll get more clarity on how the new administration plans to invest in infrastructure until after Inauguration Day, and then it takes time to put a plan in place. Mitchell doesn't think money will start flowing in any meaningful way until 2018.

But with long-term demand for infrastructure only rising, now's still a good time to get in, said Santoro. Look for companies that are currently growing earnings but also allocate capital back to shareholders. He likes businesses that generate a lot of cash and use that money to grow dividends over time.

It's also important that companies can operate assets for the long term, said Mitchell. Toll roads and airports, for instance, require ongoing operations, which are often overseen by an infrastructure company. If a company's obligations to that asset ends after, say, two years, then they'll have to find something else to fill their pipeline. "You want to see cash flows and growth in cash flows for a number of years," he said.

While it's hard to know which companies will benefit directly until contracts are signed, with so many assets needing upgrades, big-name firms that can handle the volume and complexity of these projects should get at least some of this money. As well, don't just invest with the United States in mind — many companies have operations in other countries and will benefit from their infrastructure needs, too.

That's how Mitchell approaches his fund. He owns companies that will benefit from America's plans, but they'll see gains elsewhere, too. "I'm not buying these on the back of U.S. spending," he said. "But that tailwind is a bonus."

— By Bryan Borzykowski, special to CNBC.com