Earnings season kicks into high gear this week, but more importantly Donald Trump takes the oath of office to become the 45th president of the United States. Investors hoping for insight on the outlook for corporate earnings under the new administration might be better off looking at Trump's Twitter account than analyst's estimates.

The Estimize Roundtable: Convergex's Nick Colas joins us to discuss the Trump Administration

On multiple occasions the President-elect turned the spotlight on specific companies whose business could be flipped upside down when he takes office. Trump's promises and threats, whether or not they hold, mean one of two things for corporate earnings: estimate activity will plummet or start to inch up.

For the companies expected to benefit from the new administration, estimates for the fourth quarter and beyond have already started to trend higher. This week, reports from Goldman Sachs, Citigroup, Check Point Software Technologies and General Electric will either bolster or undercut the thesis that a Trump presidency benefits certain industries.

One of the major themes expected to dominate earnings season this quarter is the resurgence of Wall Street. Financial stocks soared in the final months of 2016 on speculation Trump would repeal much of Dodd-Frank and on the Federal Reserve's decision to raise rates in December.

Given that the initial round of bank reports came in mixed to positive, the strength of the recent rally appears excessive. That doesn't bode favorably for Goldman Sachs or Citigroup, both scheduled to announce Q4 results tomorrow morning.

Goldman Sachs, in particular, made the largest gains following the election. That sets up the stock for a huge selloff if the report misses target estimates. Analysts at Estimize expect the bank to turn $4.89 per share on the bottom line, reflecting a 2 percent increase from a year earlier. That estimate improved by 13 percent since the bank's most recent report in October. Revenue for the period is forecasted to increase by 4 percent to $7.58 billion, marking two consecutive quarters of positive growth.

Goldman Sachs stands to profit from an improving economy and higher rates, which would help its trading business and lending spreads, respectively. Trading revenue will continue to rise on the back of growing fixed income, currency and commodities trading, while the post-election volatility is expected to drive equity trading. Meanwhile improving underwriting and M&A activity in 2016 positions the bank to grab extra top line support.

While the stars appear aligned heading into tomorrow's report, any sign of weakness will undoubtedly punish shareholders. Goldman's vast exposure to international markets makes it prone to currency headwinds and macroeconomic uncertainty, especially in Europe. 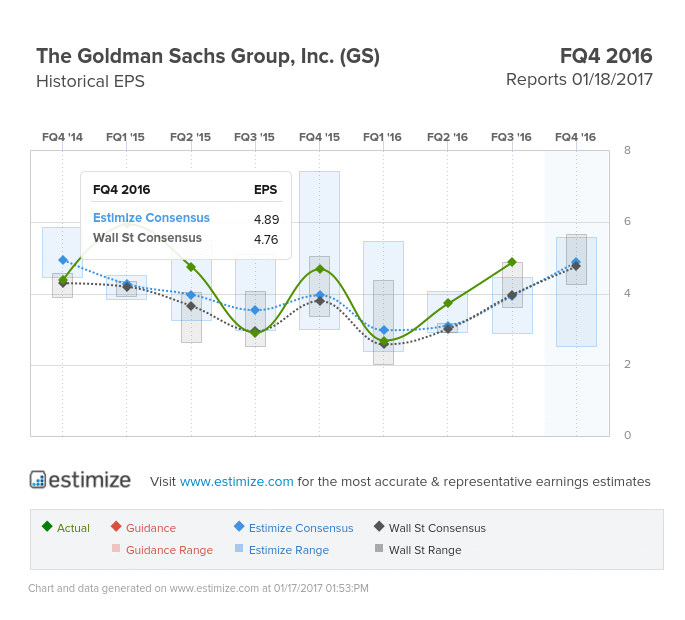 Citigroup faces a similar situation. The recent run-up could come to a screeching halt if results miss target estimates. Analysts at Estimize anticipate earnings will rise by 7 percent to $1.14 per share on an 8 percent decline in revenue to $17.2 billion.

Trading revenue will again be an area of focus in the upcoming report. During the third quarter revenue from fixed income, currencies and commodities rose 35 percent while equity trading fell by 34 percent to $788 million. Overall trading revenue grew 16 percent to 4.1 billion on improving market conditions.

Citi found additional support from rebounding oil prices and a 5 percent decline in loan loss reserves. A bulk of this quarter's results will be predicated on the performance of these businesses. Like most of its peers, the combination of weak foreign exchange translation and economic uncertainty poses a legitimate threat to performance. 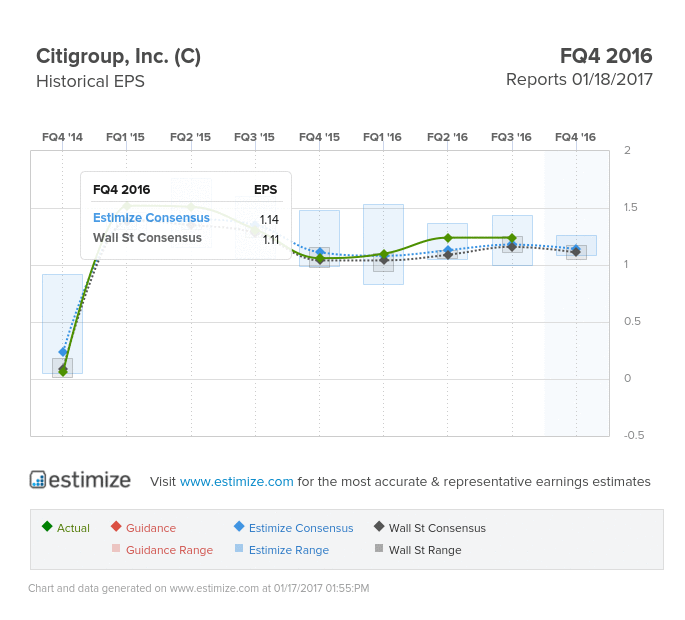 The latest reports that Russia influenced the November election forced the administration to address some of the current cyber security holes. Trump said he will create a panel to help bolster cybersecurity defenses and recently announced that former Mayor Rudy Giuliani would play an unofficial role in those efforts. The latter announcement incited quite a bit of uproar given Giuliani's sparse experience in the space. But the flood of news surrounding hacking and Russia puts cybersecurity companies in a favorable light for the bulk of 2017.

Until these threats die down, Check Point will continue to see considerable upside for its cyber security products. The rapid adoption of these products along with continual research and development should provide adequate support to top line growth. Third-quarter subscription revenue came in 24 percent higher to $99 million, making up nearly 25 percent of total revenue for the quarter.

Investors believe that the growing trend in security measures will back a strong fourth quarter report. Analysts are calling for earnings per share of $1.27 on $478 million in revenue, according to the Estimize consensus data. Compared to a year earlier, that represents a 3 percent increase on the bottom line and 5 percent on the top. Shares have increased by nearly 8 percent year to date and historically rise an additional 1 to 2 percent following an earnings report. 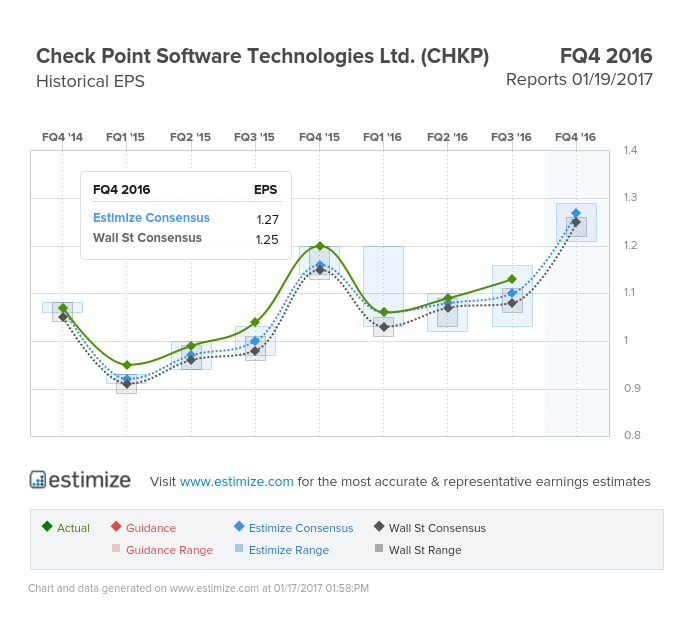 The last earnings report this week comes from industrial giant, General Electric. Behind Trump's slogan "Make America Great" was a need to rebuild American manufacturing, infrastructure and industrials. His plan to resurrect a once thriving industry, plus GE's own transformation, bodes well moving forward.

General Electric's divestiture of GE Capital is essentially complete, freeing up cash to make greater investments in the future of the company, including digital, additive manufacturing and renewable energy. Its growing strength in the industrial digital space, in particular, enabled modest growth in a volatile slow-growth environment. Fourth-quarter results will once again rest on the back of digital growth but also on power, aviation and healthcare segments, which generate the largest amount of revenue.

Unfortunately, the increased optimism swirling around General Electric isn't expected to translate into strong earnings at the end of the week. Analysts at Estimize peg earnings at 48 cents per share, down 9 percent from a year earlier. That estimate has trended sideways through the post-election boom. Revenue for the period is expected to jump 2 percent to $34.24 billion, marking a sharp decline from the previous two quarters. 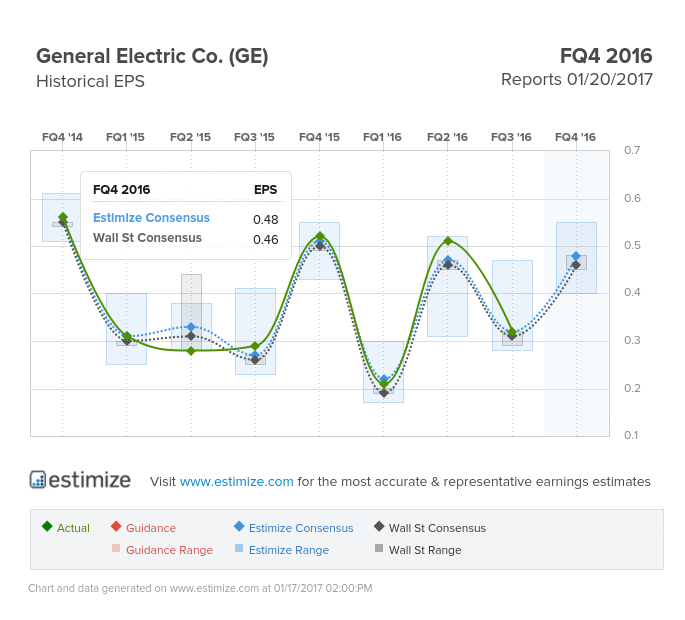 Trump's surprising election victory raised the stakes for multiple industries, but given the lack of fundamental support, Trump's trade might have run its course.

How do you think these names will report this week? Be included in the Estimize consensus by contributing your estimates here.