Consumer's appetite for travel bounced back in the second half of 2016 after years of waning demand undermined the earnings power of airlines, hotel operators and online travel agencies. Solid fourth quarter results from the airlines, particularly American Airlines, validates the ongoing recovery and forecasts for a better 2017.

The sector improved in recent quarters thanks to sliding fuel costs, improving loyalty programs and a new focus on offering low fares. Discounters that fly to very few, if any, international destinations, made the largest gains by resisting the impacts of a strong dollar. Meanwhile President Donald Trump's rhetoric surrounding deregulation and tax cuts signal additional support for the airline industry moving forward.

Is it Time to Short this Tech Giant Ahead of Earnings?

5 Stocks to Watch After the Market Closes Tomorrow

In a statement made early 2017, JetBlue reported a 4.5 percent increase in traffic on a 3.1 percent capacity increase for the month of December.The figures pale in comparison to traffic results from November and October that came in 7.1 percent and 6.5 percent higher, respectively.

Overall preliminary revenue per available seat mile for the three months fell by an average of 1.5 percent, largely due to the negative impact of Hurricane Matthew in October. Investors can also expect compressed margins amid rising fuel and labor costs.

To offset some of the downturn, JetBlue turned its sights to expanding flight coverage and improving the customer experience. The airline recently decided to resume commercial flights to Havana and expand service to Bermuda, highlighting its new focus on international markets. Meanwhile, all flights will now include free Wi-Fi access in addition to free streaming video service and 36 channels of DIRECTTV.

For the fourth quarter, analysts at Estimize are looking for 50 cents on the bottom line, reflecting a 12 percent decline from a year earlier. That estimate, however, increased by 3 percent since JetBlue's most recent report in October. Revenue for the period is expected to climb 3 percent to $1.65 billion. JetBlue remains the worst performer among the discount airlines with share prices nearly flat in the past 12 months. 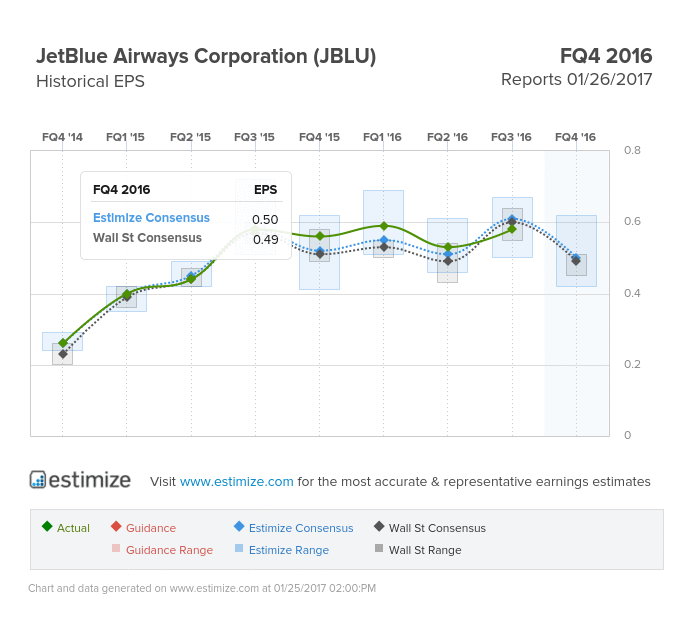 Shares of Southwest, on the other hand, jumped by 28 percent over the same time period.

Similar to JetBlue, Southwest reported lackluster preliminary traffic results for the three months ending in December. On average, traffic increased just above 5 percent with average seat miles gains in the same ballpark. Management now estimates fourth quarter operating revenue per average seat mile (ASM) to decline in the range of 3-4 percent, compared to earlier guidance of a decline of 4-5 percent.

The improved outlook resulted from better close-in yields and added destinations such as the Caribbean and Cuba. Services to the Cuban Capital of Havana marks 100 destinations across domestic and international flights

Many of these factors should theoretically improve performance but sentiment for the fourth quarter continues to edge lower.

Analysts are calling for earnings of 70 cents per share on $5.04 billion in revenue, according to the Estimize consensus data. Earnings estimates have dropped by more than 10 percent following Southwest's weak third-quarter report. Compared to a year earlier this represents a 23 percent decrease on the bottom line and a 1 percent increase on the top. 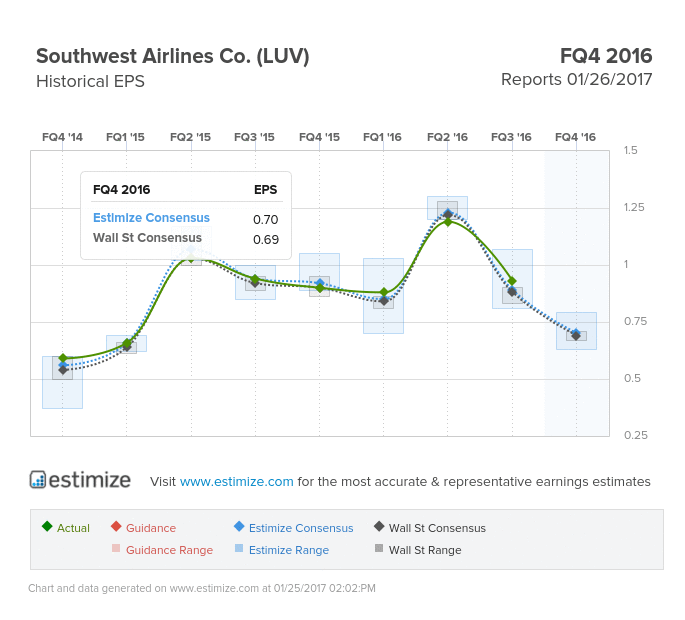 That estimate however increased 18 percent since the airlines most recent report three months ago. Revenue for the period is forecasted to jump 1 percent to $9.76 billion, breaking a two-year trend of negative comparisons.

To top it off, management also raised guidance for pretax margins in range of 7-9 percent from early indications of 6-8 percent.

How do you think these names will report? Be included in the Estimize consensus by contributing your estimates here.