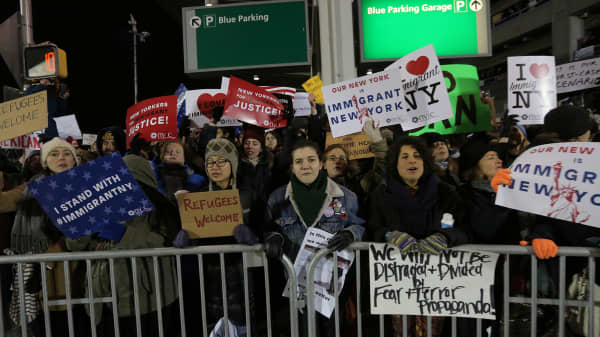 My friend Rasheed and I are both fathers, grew up watching Saved by the Bell and 1990s professional wrestling, and once boiled crawfish together.

We are also both Americans—though his story is a bit different than mine.

His family came to the country as Muslim immigrants. Like the men and women detained in airports over the weekend, Rasheed's family once boarded a plane and headed for a better life.

For me, Rasheed puts a human face (one I like a whole lot) on the Executive Orders Donald Trump signed over the weekend. While Trump maintains that the Orders are not the "Muslim Ban" he advocated for during the campaign, in an interview Saturday Rudy Giuliani stated that Trump contacted him asking for a legal method to enact a ban.

Even if you've never personally known a Muslim and can't get to a place where you have compassion for refugees and immigrants based on religious beliefs, constitutional principles, or the words of past Republican presidents like Ronald Reagan and both George Bushes, there is a bottom-line reason why you should oppose Trump's policies on Muslim immigrants and refugees.

The bottom-line reason is this:

America's economic strength is based on attracting the best and the brightest to come here and help build a better future.

That competitive advantage is baked into our entire economy.

"You don't need to be a Muslim, a Green Card holder, or a refugee, or have a friend like Rasheed to feel the impact of this radical remaking of America."

When a college student gets an engineering degree and goes to start his or her own company, investors know that student succeeded in a system that attracts the smartest minds from all over the world. Foreign airlines buy Boeing planes because Boeing is a company founded in a society that believes in merit, talent, inclusiveness, and competition. Succeeding in America—either as an individual or as a company—is based on the notion that you are competing against the best ideas and the most talented individuals, regardless of what they believe or where they were born.

And that brand has worked really well for us.

That brand is the reason why a nation with 5 percent of the global population can be the world's biggest innovation engine. The words on the Statue of Liberty welcoming immigrants to America through a "Golden Door" weren't just a poetic metaphor.

They were an economic prophesy.

Our belief in an open, welcoming, competitive society is our gold mine. It's what has made our businesses innovative and our economy strong.

Donald Trump is destroying America's brand as a beacon for the talent. Over the weekend Trump informed the world the United States is no longer a welcoming nation, that our government no longer believes in the concept of individual merit and worthiness, and instead finds specific groups of people and religions wholly unworthy of the opportunity to earn the title "American."

You don't need to be a Muslim, a Green Card holder, or a refugee, or have a friend like Rasheed to feel the impact of this radical remaking of America.

You just have to know that the more a nation closes itself off from the world, the more economically stagnant it becomes.

No one is buying jet engines manufactured in Uzbekistan, and the graduates of Turkmenistan's universities aren't creating the world's next innovative companies. Even China, the alleged great economic threat Trump can't stop talking about, has a per capita income lower than Romania and Costa Rica. That should come as no surprise, given that both Cost Rica and Romania are ranked by Freedom House as being more open than China.

Of course, the impact of Trump's Executive Orders is about more than just our national brand.

Recently my youngest daughter came to my office and asked me if we would let some of our Hispanic and Muslim friends hide in our basement, should they need it.

I've written online enough to know that even hinting at the possibility that we might be traveling down some of history's darkest roads brings out a hysterical outcry and people citing "Godwin's Law," which is the idea that invoking Hitler automatically invalidates any argument.

Citing Godwin's Law means you view history as though it were the Star Wars movies. That view of history is wrong. Only George Lucas thinks the story of an Evil Empire starts in the middle.

In real life, every story has a beginning.

But it doesn't take going full-Fuhrer to damage our country.

It might be as simple as telling the world you're no longer welcome in America, and you should take your hopes, dreams, and talent elsewhere.

And if that's who we've become, we all lose.