Nearly 10 years ago, Steve Jobs took the stage at a keynote event to introduce the first smartphone designed and built by Apple. Little did he know that the iPhone would become the most popular consumer electronics product of all time.

Fast forward to 2017 and Apple is now staring at an uphill battle to juice sales growth.

Many companies that supply chips to power the iPhone depend on strong phone sales to carry quarterly results. As a result, last year's soft iPhone sales and shipments have led to weak performances from Skyworks Solutions, Cirrus Logic and Qorvo.

Cirrus Logic reports quarterly results on Wednesday afternoon, followed by Qorvo on Thursday. Because Apple releases results on Tuesday, investors will already have a vague idea of how the two companies stand to report.

Apple posted negative comparisons in each of its past three reports on the back of decelerating iPhone sales, marking the worst stretch in 10 years. Apple hopes the new iPhone 7, released in September 2016, can stir up strong growth in Tuesday's fiscal first quarter report.

Estimize contributors expect earnings of $3.24 per share, reflecting a 2 percent decline from a year earlier. That estimate, along with revenue, increased by 2 percent in the past three months, largely on the perceived success of the iPhone 7.

Revenue for the period is expected to increase by 1 percent to $76.95 billion, barely cracking positive territory.

Apple remains one of the most widely covered stocks on the Estimize platform, frequently gathering more than 1,000 estimates.

In any given quarter, the iPhone accounts for about two-thirds of total revenue, so it's important that sales meet analysts' targets. But this doesn't only impact Apple. 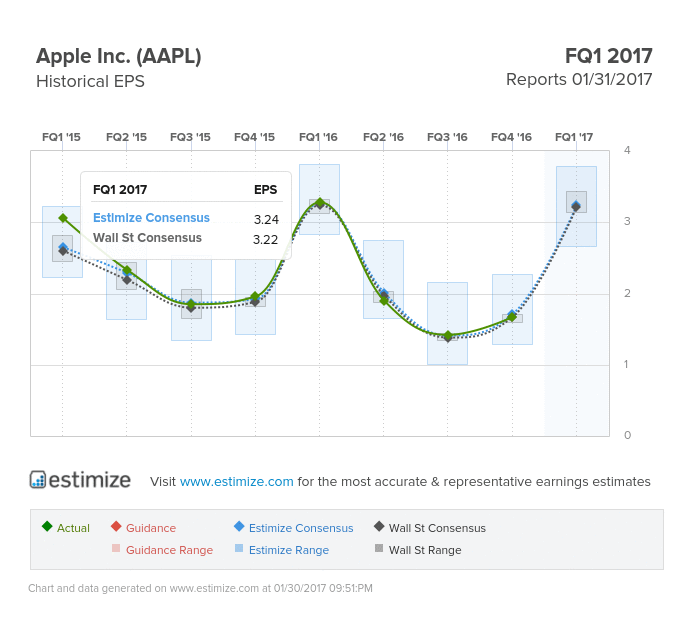 Cirrus, in particular, has the most to lose from weak iPhone sales.

Apple is hands down the company's largest customer, accounting for nearly two-thirds of the company's revenue as of the last report. That figure dropped considerably from previous quarters when it was closer to 80 percent.

Cirrus is diversifying its product portfolio and client base by investing in the audio segment and making acquisitions.

The Estimize community are optimistic that Cirrus can deliver strong results despite ongoing Apple weakness. It expects earnings of $1.64 per share, about 94 percent higher than the same period last year. That estimate increased by 18 percent since the company's most recent report in October.

Revenue for the period is predicted to increase by 42 percent to $499.46 million, notching two consecutive quarters of 40 percent growth. 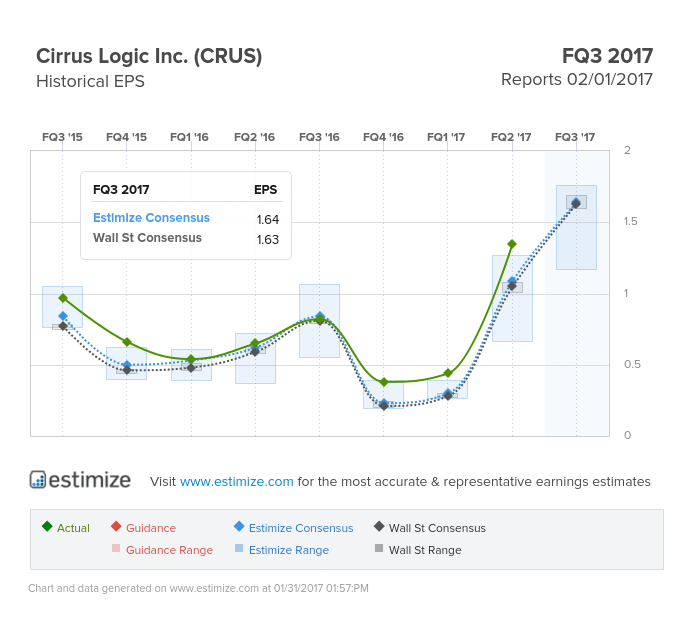 Qorvo, on the other hand, faces a more precarious situation.

Estimize users expects earnings to come in at $1.24 per share, roughly 24 percent higher than a year earlier. That estimate was revised down nearly 17 percent during the quarter, a sign that the earnings announcement will fall short.

Revenue for the period is forecast to jump by 31 percent to $803.6 million.

The biggest problem for investors though will be whether management addressed the sharp downturn in margins from the last report. Qorvo's ability to introduce new and innovative products w operating expenses under control bodes well for margin growth in the upcoming quarter. 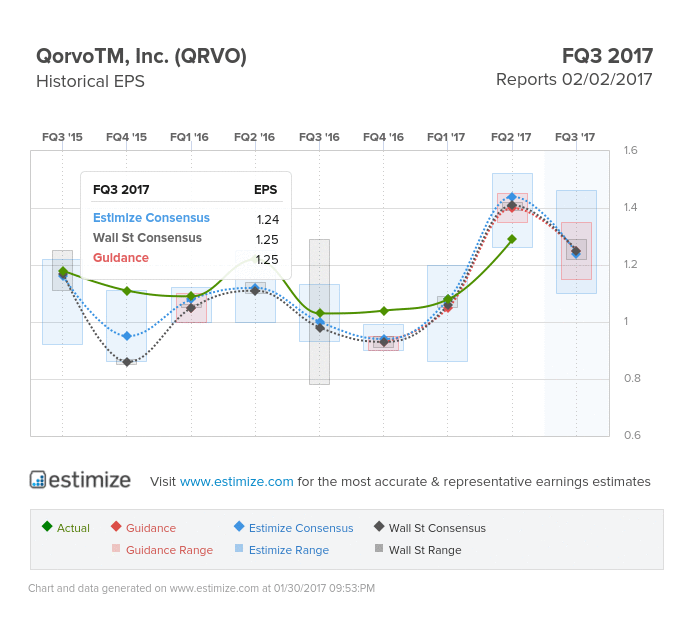 Nonetheless, as iPhone demand maintains its steady slide, both Cirrus Logic, Qorvo and other Apple chip suppliers will continue to come in the line of fire.

How do you think these names will report this week? Be included in the Estimize consensus bycontributing your estimates here.