The Democrats' strategy can be summed up in one word: anger 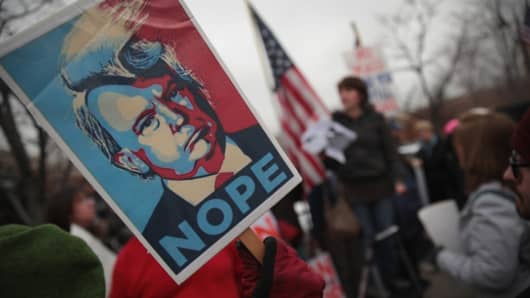 Getty Images
Demonstrators protest in front of the offices of U.S. Rep. Dan Lipinski (D-IL) on February 22, 2017 in Chicago, Illinois.

In February 2007, Democrats began a new era fueled by hope.

That was the month Barack Obama announced he was entering the 2008 presidential campaign.

You can see that anger on display at packed town halls in places where Democrats are typically thought of even by their own party as an irrelevant minority.

But anger has quickly made Democrats relevant in even the reddest of states.

Recognizing the impact of Democratic protests, Alabama Republican Mo Brooks said repeal of Obamacare might be impossible, because "there are a significant number of congressmen who are being impacted by these kinds of protests, and their spine is a little weak."

(Showing that irony isn't one of his strong suits, Brooks followed his statement about the strength of his colleagues' spines by saying he would not hold his own town halls—due to fear of protests.)

"Anger is pushing Democrats to spend cold February nights in high school auditoriums giving their congressman an earful—almost two years out from the next election."

Democrats might be catching on to the merits of anger as a political strategy. Hope delivered the White House to the Party twice, but anger helped Republicans capture more than 1,000 state legislative seats previously held by Democrats, most governorships, and both the House and the Senate.

The fury on display at protests and in town halls might be the best thing that has happened for the Democrats in a long time. It's breathing energy and life into a party that for years pinned its success on the inevitably of demographics.

Now, rather than the hopeful belief that the country is too diverse to elect a Republican, anger is pushing Democrats to spend cold February nights in high school auditoriums giving their congressman an earful—almost two years out from the next election.

In the months before the election, I heard more than one Bernie Sanders supporter say there was no difference between Hillary Clinton and Donald Trump, and that they planned on voting for a third-party or write-in candidate.

It's hard to imagine those same voters seriously making the same argument after a steady stream of alternative facts, Russian influence, the media being labeled an "enemy of the American people," stories of pastors preparing safe houses for undocumented immigrants and a failed Muslim ban.

And those are just the lead stories.

There are policy decisions that receive less attention but still show how wrong it was to believe there was no difference between Trump and Clinton.

My wife and I are both graduates of AmeriCorps, a national service program that provides participants with a small living stipend and a college grant in exchange for a year of community service. My wife spent her AmeriCorps year as a literacy aide in an elementary school, and used her grant to pay off what remained of her student loans. I spent my AmeriCorps year working for a nonprofit that provided housing and job training to homeless veterans.

AmeriCorps changed my life and helped me become the first person in my family to earn a Bachelor's degree.

Last week, an internal memo from the Office of Management and Budget showed AmeriCorps as one of several programs the Trump administration plans to eliminate—despite constituting a negligible cost to the federal government in an administration that doesn't use fiscal responsibility as a guiding principle.

Put another way, the $10 million cost of Trump's first month of trips to Mar-A-Lago would pay for 1,745 AmeriCorps educational grants.

Whether it's a Muslim ban or the elimination of programs that help young people pay for college, liberals who couldn't see the difference between Trump or Clinton—or believed that Clinton wasn't sufficiently liberal enough to earn their vote—are now seeing the difference on a daily basis.

It might seem farfetched to think of anger uniting Democrats in the aftermath of a close race for DNC Chair between Perez and Keith Ellison, the Minnesota congressman favored by Bernie Sanders and many in the more liberal wing of the party. In the next few days we'll hear a lot about an identity crisis and maybe even a "civil war" for the Democratic soul.

But we've heard about the Republican identity crisis and "civil war" for years—while the party racked up victory after victory. With Donald Trump, years of sustained anger united a divided GOP around a candidate who deviated from the conservative base on everything from gay marriage to entitlement spending.

Who would have seen that coming when the Tea Party was forcing Republican candidates to try and make Ted Cruz look liberal?

In politics, anger can do strange things.

And for Democrats, anger may prove more effective than hope at helping the party win back some of what's been lost over the past 10 years.