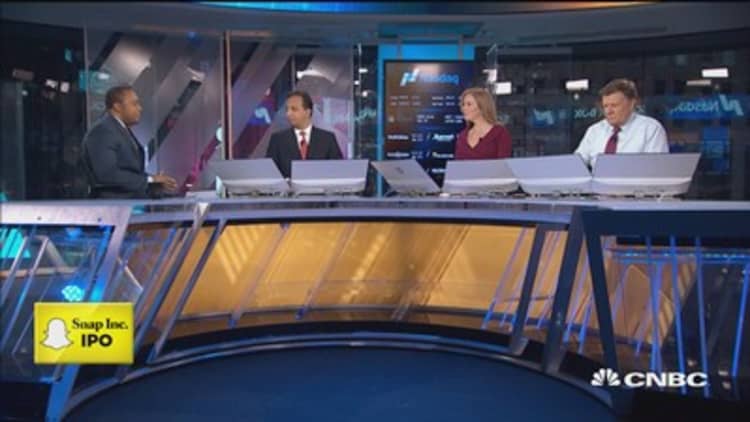 Some analyst worries were not calmed by Snap's eventful IPO, when the stock debuted up 44 percent on Day 1 from the initial offering price of $17 per share.

One such analyst is Aegis Capital's Victor Anthony, who told CNBC on Friday user growth was the paramount uncertainty.

"You're paying 32 times sales for slow user growth, and all indications from the data I've looked at [show] that slow user growth has continued into the first quarter of 2017," Anthony told "Squawk Box."

Anthony, who spoke before Snap shares gained another 18 percent by late morning to around $29 per share, has a hold on the stock.

The social media giant's success will hinge on its ability to maneuver other potential obstacles as well, Anthony said.

"You have the fact that Facebook is replicating Snapchat effectively across its ecosystem of apps, with Instagram, Facebook, WhatsApp, Messenger," the internet analyst said. "Facebook, which is the behemoth in the social media platform space, is copying Snapchat unabashedly."

Anthony's other concerns include Snap's unclear path to profitability, the nonvoting status of its investors, its outward cash flows and its subpar analytics as they relate to advertising.

But conversations with advertisers took on a much more optimistic tone, Anthony said.

"When I speak to advertisers, they're salivating at the prospect of getting in front that demographic of 13- to 24-year-olds," he said.

According to Anthony, the highly coveted demographic represents 60 percent of Snap's user base. And, while Anthony told CNBC that many advertisers see Snap as more of an "experimental" investment, they also see younger users as having the potential to stay with a given brand for two or three decades.

The analyst added that advertisers also like "the video-centric nature of the platform, which they haven't really seen in any other platform" despite forays by Facebook and Instagram into video.

"I think this is good and healthy for the tech space going forward," he said, with 150 other multibillion dollar "unicorns" considering going public.

"But Snap, the business itself — I think it's slightly unproven," Anthony said.

— Disclosure: NBCUniversal is an investor in Snap.