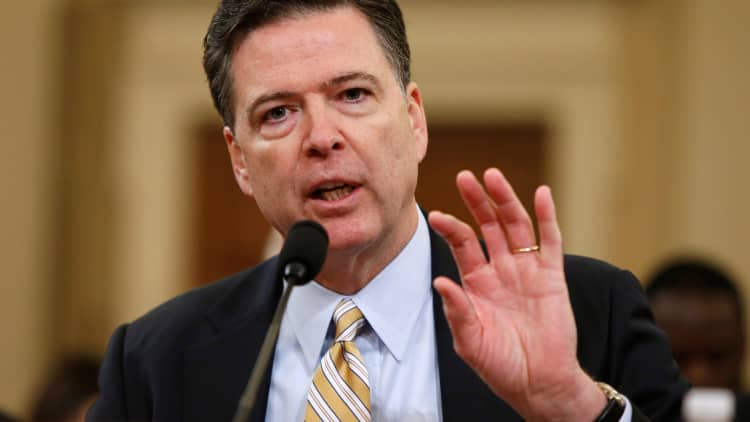 FBI Director James Comey confirmed for the first time Monday that the agency is investigating Russia's influence on the 2016 U.S. election, including any "links" between Moscow and Trump campaign officials.

Comey and National Security Agency Director Adm. Michael Rogers appeared before a extraordinary hearing by the House Intelligence Committee on the extent of Russia's meddling in the presidential election. The committee's top Democrat, Rep. Adam Schiff, said if it can be proven that the Trump campaign worked with Russia to swing the election to President Donald Trump, it would represent "one of the most shocking betrayals of our democracy in history."

In his opening statement, Comey publicly acknowledged what has been widely reported for months: "The FBI, as part of our counterintelligence mission, is investigating the Russian government's efforts to interfere in the 2016 presidential election. And that includes investigating the nature of any links between individuals associated with the Trump campaign and the Russian government, and whether there was any coordination between the campaign and Russia's efforts," Comey told lawmakers.

Comey did not signal whether collusion between the Trump campaign and Russia took place. He also did not say whether any Trump affiliates, specifically, were targeted in the investigation.

The investigation began in July, months before the election, Comey said, adding that he cannot predict when it will conclude. The FBI director said he cannot say more "about what we are doing and whose conduct we are investigating" because the investigation is ongoing and classified.

"We just can't do our work well or fairly if we start talking about it while we're doing it," Comey said.

The U.S. intelligence community has accused Moscow of trying to influence the election, saying it initially wanted to derail then-candidate Hillary Clinton and then developed a preference for Trump. National Security Agency Director Michael Rogers, who also testified Monday, said the agency stands by the intelligence community's earlier report on Russian meddling and its level of confidence in the findings has not changed. But he added that he could not divulge information beyond what was released in an unclassified report.

White House press secretary Sean Spicer said Monday that the House hearing did not show any collusion between the Trump campaign and Russia.

"Following this testimony, it's clear that nothing has changed. Senior Obama intelligence officials have gone on record to confirm that there's no evidence of a Trump-Russia collusion," he told reporters at his daily briefing. Spicer added that he did not know of any White House officials under investigation and said Trump's confidence in Comey has not changed.

Spicer instead pointed to concerns about so-called unmasking of U.S. officials, pointing to the release of information about calls related to former National Security Advisor Michael Flynn.

Comey stressed several times that his decision not to answer certain questions should not be read as an indication of what the FBI is or is not investigating.

The FBI typically does not comment on ongoing investigations, especially those involving classified information, he said. Comey added that the Department of Justice gave him permission to do so under the circumstances.

After Comey confirmed the investigation, Senate Minority Leader Chuck Schumer, D-N.Y., tweeted that Trump and the Justice Department should let the investigation go on without any "interference or political pressure of any kind whatsoever." Attorney General Jeff Sessions has recused himself from probes related to the Trump campaign.

The Trump administration has denied that the president's campaign cooperated with Russia before the election. Trump alleged earlier Monday that Democrats "made up and pushed the Russia story" to cover up the presidential election loss and argued that finding people who leaked information about his associates is "the real story."

The top Republican and Democrat on the House Intelligence Committee differed in public statements on the evidence of collusion Sunday. Rep. Devin Nunes, R-Calif., told Fox News that he saw no information to show collusion between the Trump campaign and Russia.

However, Schiff told "NBC's Meet the Press" he saw "circumstantial evidence of collusion" and direct evidence of "deception."

The California congressman said Monday that "we do not yet know" whether Russia had help in its campaign from U.S. citizens, including people related to Trump's campaign.

"If the Trump campaign, or anybody associated with it, aided or abetted the Russians, it would not only be a serious crime, it would also represent one of the most shocking betrayals of our democracy in history," Schiff said.

Both Rogers and Comey said they did not have evidence that Russia influenced vote tallying in key states that helped to decide the election. Comey added that the FBI saw efforts to penetrate voter registration database but not voting machines or tabulation processes.