It's stand and deliver time for Trump and Congress on deregulation 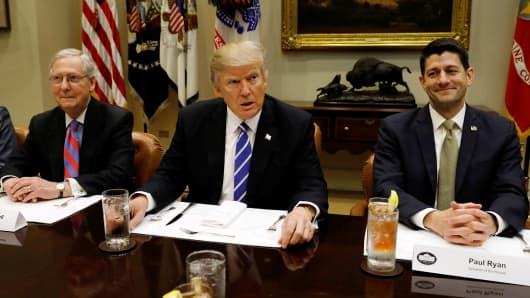 Businesses in the U.S. are clearly starved for a place to run their factories or simply set up shop where they aren't shackled by burdensome regulations that stifle innovation or make it prohibitively expensive to operate and expand.

Entrepreneurship literally crashed under the Obama administration. New business formation dropped to a 40-year low in 2014, according to the latest data available from the Census Bureau.

As a result, an entire generation of blue-state loyalists in the Midwest abandoned their party in favor of a Republican who made it clear that yes, they had his ear and yes, he was prepared to act on their behalf. It's no secret that trade-driven job losses to overseas operators was a huge source of voter discontent.

And, that's why the current state of our nation is being rapidly reshaped by an administration committed to deregulation.

Luckily for the U.S. economy as a whole, many take-offs in recent years have preceded landings within our borders. According to the latest U-Haul Migration Trends Report, Texas was the top-ranked growth state in 2016, followed by Florida. Texas has become a magnet by gaining a reputation as a microcosm of deregulation. Conversely, Illinois ranked 50th as the top net-loss state, preceded by 49th-ranked California. Both states have gained bad reputations, especially among smaller businesses, given they are overly bureaucratic and litigious and among the most over-regulated, to say nothing of having some of the highest property and income states in the nation.

These data dovetail with a separate study by Irvine-based Spectrum Location Services which found that in the seven years through 2014, the Golden State lost 9,000 companies that relocated out of the state. The greatest beneficiary was Texas. While incentives, taxes and other costs to conduct business were cited, the main takeaway from respondents was that it was easier to do business in Texas.

That said, taxes have certainly risen on the worry list of millions of middle-income earners. From 1990 through 2011, Illinois lost a steady 64,000 residents per year. That average outmigration kicked above 100,000 in the aftermath of 2011's income-tax hike, multiple property tax hikes and no signs of relief as pension underfunding threatens more to come.

Despite a huge surge in overall confidence, small businesses continue to bemoan the hostile tax environment. In the latest National Federation of Independent Business (NFIB) survey for February, taxes were cited as the top concern followed by finding qualified labor, regulations, weak sales and insurance costs.

The laundry list of impediments to growth help explain what the Lindsey Group's Peter Boockvar notes to be the one component in the NFIB survey that has yet to enjoy a post-election pop: Plans for increased capital spending, which slipped to 26 percent in February, lower than both January's and October's 27-percent readings.

One thing is becoming increasingly apparent. It's stand and deliver time for President Trump and the new Congress. Getting companies to spend and expand requires more than just cutting red tape. Legislative follow through on campaign promises in the form of tax cuts and infrastructure spending initiatives must underpin deregulation via executive order and purely partisan maneuvers.

Backlashes of the sort that culminated in the outcome of the 2016 elections don't happen overnight, they build up over time and crescendo in the most unexpected way. While change is clearly long overdue, the anger that remains, simmering and toxic across the electorate, suggests a reversal of fortunes could be just as swift by comparison. The onus is clearly on the new leadership to build bipartisan support or risk losing control as soon as the 2018 midterm elections.

Commentary by Danielle DiMartino Booth, founder of the consulting firm Money Strong LLC. She is also a former advisor to the president of the Dallas Fed and the author of "Fed Up: An Insider's Take on Why the Federal Reserve Is Bad for America" (Portfolio: February 2017). Follow her on Twitter @dimartinobooth.