Skip Navigation
Fired Up2 'downsides' of early retirement, according to a self-made millionaire
Ryan Ermey
SuccessWant to sound and feel more confident? Ditch these 11 phrases from your...
Kathy and Ross Petras, Contributors
MoneyThis mom makes $760K a year in passive income—and lives on a sailboat: 'I work...
Michelle Schroeder-Gardner, Contributor
Phyllis Korkki, an assignment editor at The New York Times, creates content for the company’s Snapchat account in the garment district in New York, July 12, 2016.
George Etheredge | The New York Times

How on earth did I become an "older worker"?

It was only a few years ago, it seems, that I set out to climb the ladder in my chosen field. That field happens to be journalism, but it shares many attributes with countless other workplaces. For instance, back when I was one of the youngest people in the room, I was helped by experienced elders who taught me the ropes.

Now, shockingly, I'm one of the elders. And I've watched my industry undergo significant change. That's why I recently went searching for a young mentor — yes, a younger colleague to mentor me.

Not at all. Some companies — including Cisco Systems, Target and UnitedHealth Group — are embracing reverse mentorships, particularly as technological change sweeps through offices and lives. Millennials, after all, grew up with computers, and they are "natural consultants," said Debra Arbit, chief executive of BridgeWorks, which helps companies deal with generational differences. America's younger workers have already been "personal technology consultants in their own families, so it's a role they're very comfortable playing," she said.

I sought a mentor to help me develop a specific new skill — and something entirely outside my comfort zone — namely, how to use Snapchat, the smartphone-based photo and video service that is popular among teenagers and young adults. Not coincidentally, Snapchat is also being used as a newsroom tool at The New York Times to reach new readers.

I didn't need to look far to find my mentor: Last year The Times's resident Snapchat expert, Talya Minsberg, 27, moved into a cubicle just a few rows from mine. Her job title alone — social strategy editor — is a clear sign of our changing world.

"My job didn't exist five years ago," Talya pointed out. That's another eye opener. The job I hold, editor at The Times, has existed for generations.

My experience with Talya taught me far more than the basics of a new form of video storytelling (which was already asking a lot). Along the I learned important lessons about the strengths and weaknesses of the middle-aged brain, and how learning new things can keep it in top working order. It also made me realize that organizations and individual workers could do a lot more to bridge the gaps between generations. Each age group has untapped resources that can benefit others at a different stage of life.

In the beginning, I felt a little awkward about reaching out to Talya at all. A part of me felt that at my age (mid-50s) it was somehow unseemly for me to ask for help, particularly from one so young.

Ms. Arbit suggested a possible reason for my awkwardness: Baby boomers tend to have a hierarchical view of the workplace — an "org chart" that imagines power filtering down from the top. Millennials, by contrast, may see the office as more of a horizontal network, she said.

At the same time, as a younger person conversant in the trendiest technology, Talya seemed imbued with a kind of . I felt as if face-to-face communication was too old-fashioned a way to set up meetings with her. Even though she sat just a few desks away, it didn't seem right to come up to her and say, "Could you meet at noon on Wednesday?" the way I might easily do with an older colleague.

Email seemed old-fashioned, too. So instead we set up our meetings using her preferred method: Google Calendar. To me, the practice of deciding unilaterally on an open time felt presumptuous, and to reject someone else's suggestion seemed rude. But that's not how Talya viewed it — to her, it was the most convenient way of arriving at a suitable time because the participants can view each other's calendars.

In one of our early Google Calendar-arranged meetings, I informed Talya why I was asking her to teach me Snapchat: "I want to be on !"

Very slowly, Talya taught me Snapchat fundamentals. It was not easy, partly because the software is not intuitive. In fact, as Talya put it, it can be "really weird and hard to understand." 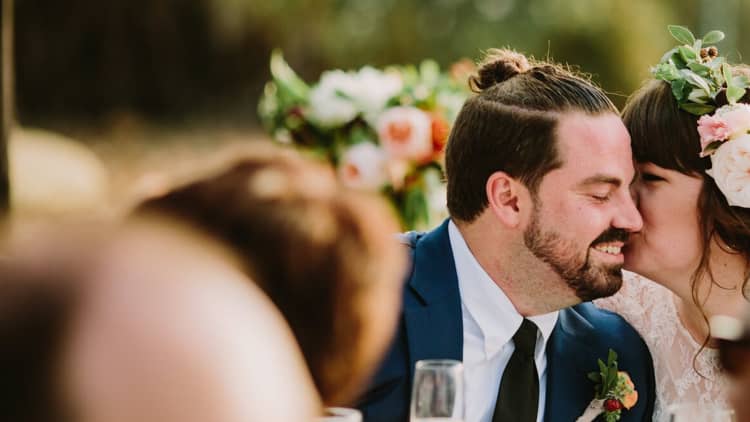 VIDEO0:4800:48
This millennial went from broke to millionaire within five years
Make It

But part of the problem was me — a person in her mid-50s trying to learn something new. Earl Miller, a neuroscience professor at the Picower Institute for Learning and Memory at the Massachusetts Institute of Technology, explained why progress might be slow.

As you age, your dendrites — the antennas by which neurons receive information from other neurons — begin to shrink, he said. This is especially noticeable in the prefrontal cortex, which handles higher-order brain functions like focusing, staying on task and forming long-term memories.

The decline in these areas begins in your 40s and 50s and worsens from there, he said. This can make it tougher to focus. There's also more of a limit to how many thoughts people can carry in their heads simultaneously.

"Your mind's bandwidth is smaller," he said. "You learn at a slower rate because less information is getting in."

All of these abilities tend to be at their peak when people are in their 20s — Talya's age. Before the age of 30, people's brains possess more plasticity, meaning they can learn more easily.

That sounds depressing. Isn't there any mental upside to getting older?

Yes, there is, Professor Miller said. Older people tend to be more disciplined and diligent, he said, which can compensate for learning deficits. Based on their greater experience in the world, they are also very good ideas and thoughts into categories — the very basis of knowledge and wisdom.

It's true: "The older brain is a wiser brain," he said. But it can also get into a rut because of its lack of plasticity.

The brain is like a muscle that benefits from mental exercises such as learning new things. The more you put your brain through its paces, the easier it will be to learn the next thing. "It's always important to keep yourself cognitively engaged," Professor Miller said.

As Brandon McMillan, host of the TV show "Lucky Dog" — in which he rescues a dog from a shelter and trains it before placing it in a forever home — has said: "You can teach an old dog new tricks. You just can't teach them as fast."

And as Talya taught me the fundamentals of Snapchat, I felt a little like Dottie, the 12-year-old spaniel-terrier mix who had to practice new skills over and over with Mr. McMillan on one recent episode. It took an inordinate amount of time for Talya just to show me how to hover over the yellow Snapchat QR code with my iPhone camera so I could start to follow people.

Talya explained that each individual photo or video of a story can last up to 10 seconds. Each 10-second segment can be connected to another. A story can be as long as you want it to be, but each segment cannot exceed 10 seconds.

That gives the resulting video a "raw, authentic" feel, Talya said, which appeals to many of its acolytes. Another appeal: The stories are ephemeral and disappear after 24 hours (although you can archive them on your phone).

My mentor and I set a goal of producing a Snapchat video for the official New York Times channel. But I was nervous. "I don't even do video," I said.

Talya was reassuring, calling it "just about the easiest video product." Once you shoot something, you either send it or delete it. "There's no editing. It's a very different way of thinking," she said.

First, I began following 20 or so people and organizations, and Talya described what they do well (or poorly). Then I created some practice stories on my personal account (which had two followers), and she critiqued those.

After my third, a video diary of a weekend trip to Hudson, N.Y., she pronounced me ready to "take over" the New York Times Snapchat channel, with its worldwide viewership. 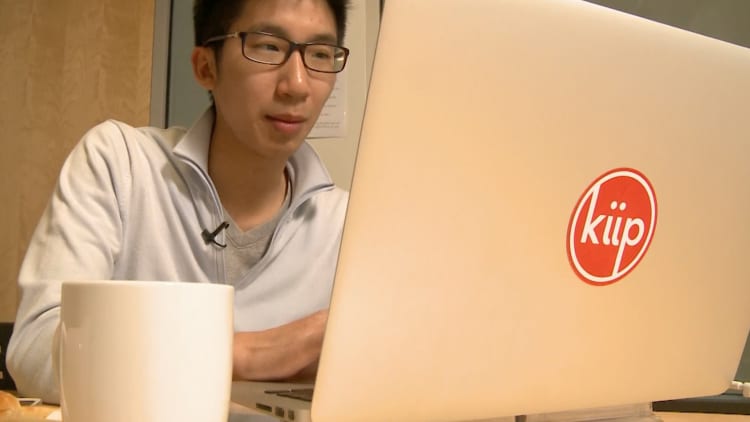 VIDEO0:5100:51
This one mistake is squashing the potential careers of millennials
Make It

My first Snapchat story for The Times was a Nasdaq MarketSite opening-bell ceremony for Scripps Networks Interactive, which owns the Food Network and HGTV. My second was a cat cafe in Brooklyn. The third was a textiles trade show in Manhattan. Although the stories disappeared from the channel after 24 hours, we archived them, and you can see the last two online. (I neglected to save the first one — so much for being on .)

My Snapchat skills are far from advanced, but I think my second video is better than the first, and the third one is better than the second, thanks to Talya's mentoring. I was able to bring my decades-long journalistic experience to bear on a new technology, with mixed but promising results.

It was exhilarating to see my progress — and embarrassing to witness my missteps, like putting my finger over the camera at the close of the cat cafe video. (But have you ever tried to record yourself while trying to keep a cat on your shoulder?)

At times I was afraid that creating Snapchat stories required more mental energy than my shrinking dendrites could handle. It took several hours to do a two-and-a-half minute story.

Before the mentorship, I had been ready to dismiss Snapchat out of hand. I came to understand that it is more creative than I realized. It's fascinating to string together photos and videos, along with captions, and emojis, into a story. Snapchat's constraints — the 10-second limit to individual segments, the 24-hour existence of stories, the inability to edit — were a bracing mental challenge. They stretched me as a journalist and a person.

So, the reverse mentorship was extremely beneficial, but there was one way in which it could have been better: I could have tried to mentor Talya at the same time. The best cross-generational mentorships work in both directions, Ms. Arbit of BridgeWorks said.

"What do I have to offer?" I asked her, suddenly discounting three decades of career experience, which was ridiculous.

But I think older workers at times do minimize their value, or their value is minimized by others, as society glamorizes the latest glittery technology. Sometimes the old way of doing things can inform and improve the new, and older workers may be the ones with the wisdom to realize this.

This article originally appeared in The New York Times. 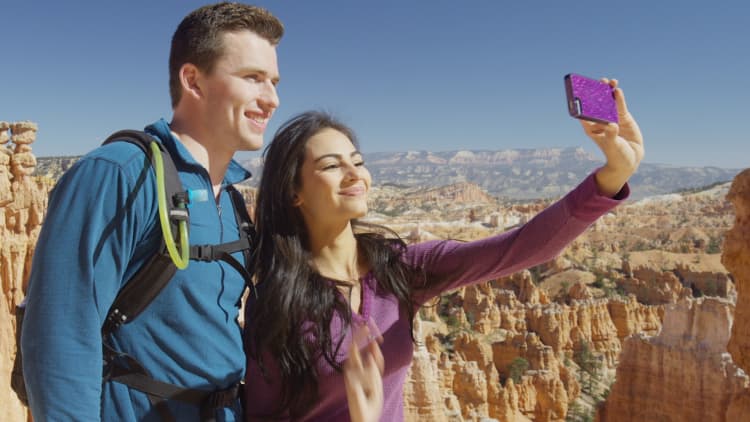 VIDEO0:5100:51
Travel is not going to solve your problems, millennials
Make It
Related Video

VIDEO0:4800:48
This millennial went from broke to millionaire within five years
Make It