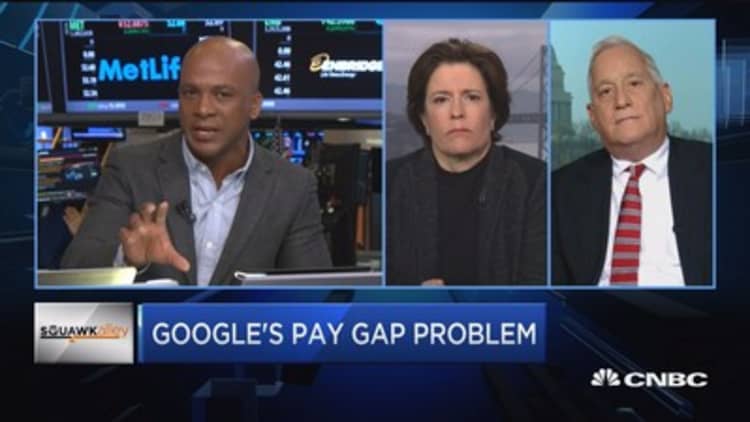 Google said last week that it had "closed the gender pay gap globally." Yet the Labor Department alleged in a hearing that "discrimination against women in Google is quite extreme."

The ensuing legal battle between the tech giant and the DoL illustrates the quandary faced by companies across Silicon Valley: Is gender equity improving that quickly, or is the industry just measuring different things?

"This is a data question. I don't think it's just a Google problem, it's a problem throughout tech," Recode executive editor Kara Swisher told CNBC's "Squawk Alley" on Monday.

Janette Wipper, a DoL regional director, testified in court in San Francisco on Friday that Google had "systemic compensation disparities against women pretty much across the entire workforce," The Guardian reported.

The fiery exchange came after Google failed to comply with a routine audit, according to the Labor Department. As industry watchers pointed out, the dispute highlights how there are lots of ways for companies across the technology industry to slice compensation data.

"It would be a rare organization I've ever encountered that doesn't have issues that it should be addressing," said Joelle Emerson, founder and CEO of Paradigm, which advises companies and helps with training and workshops related to diversity.

Tweet: For one, it's not enough to look at people with identical job titles. Not having access to certain roles is a part of what produces the gap.

Elizabeth Ames is a senior vice president at the Anita Borg Institute, which aims to help women make significant contributions to technical fields. She said that in addition to comparing the pay of women and men in the same roles, companies should measure retention, promotion, visibility and parental leave.

Emerson, who litigated pay equity cases as a lawyer, said she's always skeptical when an organization says it has "solved" a pay gap issue, because there are so many more facets of the issue that should be measured beyond what the law requires.

'It's a question of what they're going to do about it'

To the company's credit, Google has been one of the most outspoken advocates of pay equity analysis, creating a comprehensive guide for other organizations. It scores high on sites like Blendoor and InHerSight that rate companies on diversity factors.

But some have also pointed to a dark side at Google. Erica Baker, then at Google and now at Slack, made headlines in 2015 when she created a shared spreadsheet that showed bonuses at Google were not distributed equitably.

"Google has a particularly complicated system.The issue is there's not enough women in the highest paying jobs, it's probably skewing a lot of this," Swisher said. "Look at the numbers at Google — not just Google but all of the companies in tech. Most of the engineers, who are the most highly paid people there, are men."

As companies like Uber also fight allegations of sexism, gender equity is likely to continue to be a burning concern for technology companies. Emerson said that what is disclosed publicly is less important than taking action within the organization.

"It's a question of what they're going to do about it," Swisher said.