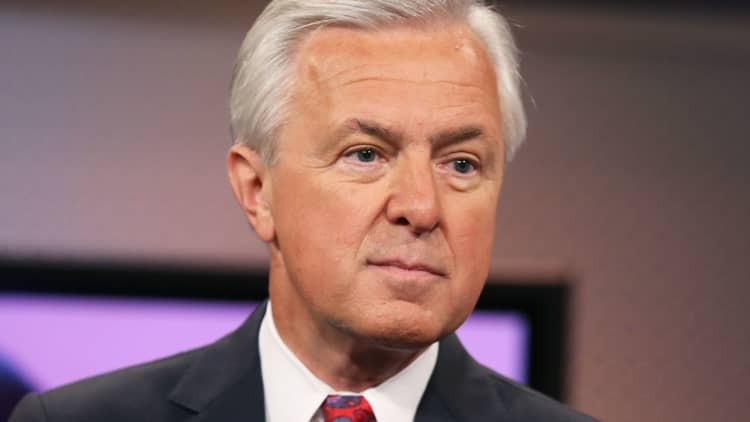 Wells Fargo's independent directors have decided to initiate corporate pay clawbacks that total some of the largest in history, after concluding a six-month investigation into the beleaguered institution's retail banking sales practices, it was revealed Monday.

A board review, a copy of which was obtained by CNBC, indicated that former Wells Fargo Chairman and CEO John Stumpf acknowledged that he made significant mistakes and helped create a culture at the bank that resulted in abuses, including the creation of fake consumer accounts.

That review was overseen by a special board committee, chaired by Stephen Sanger, and also includes three other independent directors: Elizabeth Duke, Enrique and Donald James. The special committee retained law firm Shearman & Sterling to assist the investigation.

On Monday the board is announcing that it has decided it is necessary to claw back an additional $28 million of pay from Stumpf, adding onto $41 million he already gave up when he resigned in October 2016. Stumpf's total pay from 2011-2016 was $286 million, according to executive compensation firm Equilar, meaning he will have forfeited 24 percent of his pay for that period since the scandal first emerged.

Stumpf was made aware of the systemic nature of the bank's sales practice problems starting in 2012, but was first aware of specific cases as early as 2002, according to the board. He did not initiate any follow-up investigation or inquiry into the problem until 2015.

One of the main accusations leveled at him was an unwillingness to criticize former community bank unit head Carrie Tolstedt, whom he once praised as being "the best banker in America."

"Stumpf was hesitant to criticize Tolstedt and, ultimately, hesitant to terminate her, even after the lead independent director and the Chair of the Risk Committee suggested that he do so in December 2015," according to details disclosed in the report.

The review takes aim at the bank's decentralized structure, citing "a culture of strong deference to of the lines of business (embodied in the oft-repeated 'run it like you own it' mantra."

Further, "the Chief Risk Officer had limited authority with respect to the Community Bank. As events were unfolding, his visibility into risk issues at the Community Bank was hampered by his dependence on its group risk officer and he was essentially confined to attempting to cajole and persuade Tolstedt and the Community Bank to be more responsive to sales practice-related risks," the review says.

The board singles out Tolstedt for far more criticism than anyone else for creating the problems and failing to address them.

"Tolstedt resisted change to the Community Bank's sales model even when confronted with evidence that it led to low-quality sales and improper sales practices. … Instead, she reinforced the high-pressure sales culture," the report says. Community bank was Wells Fargo's consumer banking unit.

Further, Tolstedt "was "obsessed" with control, especially over negative information about the community bank, and extremely reluctant to make changes."

Tolstedt did not respond to CNBC request for comment, but Reuters quoted attorneys for the former executive as saying "we strongly disagree with the report and its attempt to lay blame with Ms. Tolstedt." A full examination of the facts will produce "a different conclusion," the attorneys said.

Tolstedt declined, on advice of counsel, to be interviewed as part of the board's investigation, a footnote in the report revealed. As reported last month, four other executives were terminated for cause as part of this review.

Wells Fargo Chairman Stephan Sanger reiterated in an interview with CNBC that Tolstedt "is responsible" as former leader of the Community Bank unit.

Stumpf did not respond to a CNBC request for comment.

The review states that by 2015 "many Board members believed that [Tolstedt] was intentionally understating the problem which she had helped to create."

Tolstedt being terminated retroactively for cause and giving up an additional $47.3 million of pay. She had already forgone $19 million in September last year, as CNBC first reported on March 16.

Meanwhile, the report says that current Wells Fargo CEO Tim Sloan's "direct involvement with the sales practice issue was limited" until he became president and chief operating officer in November 2015. At that point, Tolstedt began reporting directly to him instead of Stumpf, and Sloan is credited with deciding to end her tenure, something that Stumpf would not do.

One email in particular stands out that highlights Stumpf's unwillingness to acknowledge the scale of the problem his company faced. In an email to Sloan on May 17, 2015, after the company was notified of the filing of a lawsuit against the bank by the Los Angeles city attorney, Stumpf wrote:

"I have worked over the weekend with Carrie on the LA issue — I really feel for Carrie and her team. We do such a good job in this area. I will fight this one to the finish. Do you know only around 1% of our people lose their jobs [for] gaming the system, and about 2/3 of those are for gaming the monitoring of the system, i.e. changing phone numbers, Nothing could be further from the truth on forcing products on customers. In any case, will win and we are right. Did some do things wrong — you bet and that is called life. This is not systemic."

In his interview for the independent review, Stumpf acknowledged that 1 percent was too high regardless.

The report is relatively less critical of the board, suggesting that at times "Board members believe that they were misinformed" by various presentations they received from executives. That acknowledged criticisms of the board, especially of its risk committee, and the fact that "the Board should have been more forceful in pushing Stumpf to change leadership so that the Community Bank could move forward more quickly."

That tone comes in sharp contrast to last Friday's Institutional Shareholder Services report, which recommended that Wells Fargo shareholders vote against of 12 of Wells' 15 board members at the annual shareholder meeting.

That meeting is set to take place on April 25, in Ponte Vedra Beach, Florida.