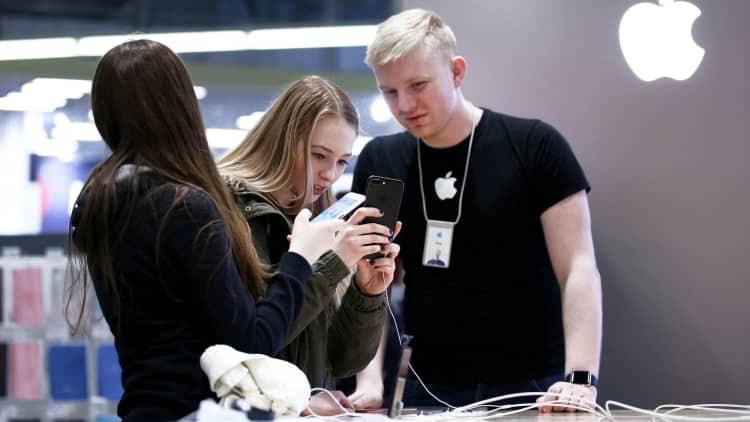 People don't buy iPhones by the tens of millions just because they like the hardware, though that's a huge part of it, but because they're tied into an ever-growing, sprawling ecosystem of software and services that allow you to do more with the products if you continue to invest in that ecosystem.

When Apple introduced the iPhone in 2007, iPod users who were already using iTunes saw something familiar and much more consumer-friendly than BlackBerry, Windows Mobile and Palm devices offered at the time. iTunes was the seed of an ecosystem that, in the past ten years, has grown into a towering elm.

The App Store launched in 2008. After that, when people bought apps and games they were also continuing to buy into Apple. As they shelled out $0.99 here and $1.99 there for new software that only ran on their Apple devices, they were digging deeper into Apple's offering and further away from BlackBerry and a new operating system that was on the horizon: Android.

Apple continued to build out this ecosystem by changing the way its products interacted with one another. Apple added the ability to use iMessage and FaceTime from an iPad, for example, allowing you to carry on your iPhone conversations on a tablet. Then it introduced a similar feature to Macs, also adding in support for full phone calls. The more Apple devices you used, the better they worked together.

Siri launched on iPhone and iPad and eventually on Mac and Apple TV and even the Apple Watch. It became a familiar voice to answer your questions, no matter where you were.

Apple TV grew from what Apple CEO Tim Cook once referred to as a "hobby" to a real home streaming device with its own app store. And if you have an iPhone or iPad, all of your pictures through Apple's Photos app are available across devices, even on the TV in your living room.

Home, an app in iOS, lets you control light bulbs, window shades, door locks and more, so long as they're build using Apple's HomeKit set of developer tools. As consumers buy these products, they're making a decision to stick with Apple.

Customers are more likely to know about them, too, because Apple has a huge retail presence.

Walk into an Apple Store and trained employees will show you exactly how to use any of the Apple products you own. Or browse the shelves and purchase any number of products that'll work seamlessly with your iPhone or iPad.

The Apple Store is also the company's support hub, where you can go in with any questions, damaged products and more for assistance. If you have AppleCare+, the company's premium warranty plan, it often costs very little to repair your expensive Apple products, sometimes in the same day.

Competitors aren't as good at ecosystems

Apple's competitors are trying to do something similar. But they're going about it in a much more chaotic way that will confuse most consumers, who don't spend their lives following the ins and outs of the tech industry.

Google is making parallel moves to integrate products like the Google Home, the Pixel smartphone, the Chromecast smart TV and more, and that's a step in the right direction.

But Google relies mostly on partners to build and maintain its ecosystem of products, and that can be incredibly confusing.

How does the owner of an LG Android smartphone know what smart home products it works with? If that same customer buys an Android TV box built by NVIDIA and a smartwatch made by Huawei, who do they go to for support? (Answer: NVIDIA and Huawei, not Google.)

Samsung is getting better at creating an ecosystem like Apple's. It sells smartphones, tablets, TVs, wearables, and laptops in the U.S., and it has apps such as SideSync that allow you to interact with your smartphone from a Samsung tablet or laptop. It has services like Samsung Pay, which is arguably better than Apple Pay because it's accepted in more locations.

Samsung also owns SmartThings, a smart home technology company that it acquired in 2014 for $200 million. SmartThings is more open than Apple HomeKit, allowing it to support Android and iOS smartphones and a large variety of smart home products ranging from power outlets to door locks and cameras.

The difference between SmartThings and Apple Home is that people have heard of Apple Home — you can hardly miss the yellow icon staring at your from your new iPhone — and can manage it easily through a single app on their smartphone. But SmartThings can be controlled by any number of apps and gadgets, including Google Assistant and the Amazon Echo. While it's versatile, it's also a lot more for a consumer to digest, and a lot harder for a consumer to get started. There's no glaring yellow app begging you to dive in on your new smartphone.

Nor do Samsung or Google have hundreds of high-profile stores around the world. Instead, they rely on small flagship viewing-only locations, pop-up events or dedicated corners in Best Buy, as places to better understand the products.

This doesn't help. As product ecosystems become more powerful, consumers need a single easy place to go to learn more about how they can be used.

Consumers also need a place to go for support. If you break your Samsung smartphone, you're going to be on the phone with your smartphone insurance provider -- if you bought insurance at all. If you have an iPhone, just walk into an Apple Store. Apple may charge you a premium depending on your warranty status, but you'll have some sort of solution from the company you bought your phone from. That's a big deal.

Competitors may be able to build a better smartphone, or better laptop, or better augmented reality device than Apple. But Apple has a years-long head start in building an ecosystem of products that leverage each other's strengths. That's why its services business now is almost the size of a Fortune 100 company alone. That will take a long time for any competitor to equal.

And that's why people will keep buying Apple products.