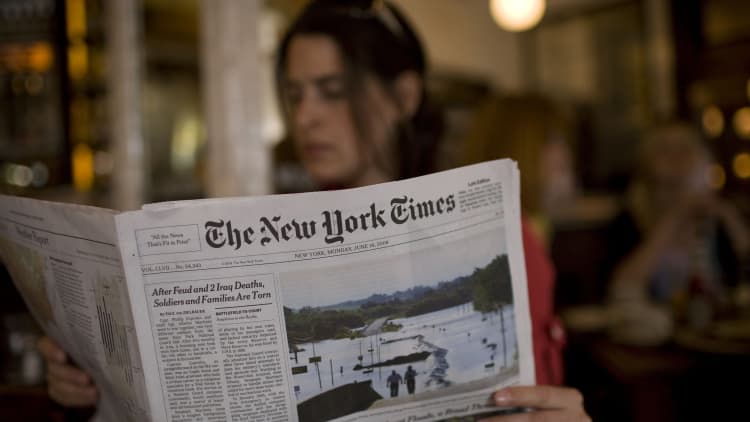 President Donald Trump, who has disparaged the New York Times on several occasions as "failing" may actually be good for the media company.

On CNBC's "Power Lunch," New York Times CEO Mark Thompson said "there is no question we have got some rocket fuel in the subscription business in recent quarters."

@realDonaldTrump: Somebody with aptitude and conviction should buy the FAKE NEWS and failing @nytimes and either run it correctly or let it fold with dignity!

@realDonaldTrump: Remember when the failing @nytimes apologized to its subscribers, right after the election, because their coverage was so wrong. Now worse!

"We added an astonishing 308,000 net digital news subscriptions, making Q1 the single best quarter for subscriber growth in our history," Thompson noted in an earnings release on Wednesday.

The New York Times reported revenue and earnings before trading on Wednesday which exceeded expectations. Class A shares of the company closed more than 12 percent higher on Wednesday.

The company posted first-quarter adjusted earnings at 11 cents per share on revenue of $398.80 million, up 5.1 percent year over year. A consensus of analysts polled by Thomson Reuters expected EPS of 7 cents on revenue of $382 million.

"These results show the current strength and future potential of our digital strategy not just to reach a large audience, but also to deliver substantial revenue," Thompson said in the release.

The company also reported that its quarterly circulation revenue increased by 11.2 percent. Paid subscriptions for digital-only surpassed 2.2 million, up 62.2 percent year over year.

As of Wednesday's close, shares of the New York Times were up21 percent year to date, and have risen about 29 percent over the past 12 months.