It's not about Confederate statues, it's about the law 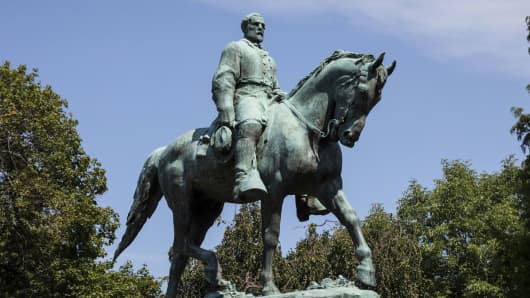 President Donald Trump added more fuel to the fire surrounding this past weekend's violent Charlottesville protests by tweeting his support for keeping "beautiful" statues and monuments to Confederate heroes, even comparing them to George Washington and Thomas Jefferson:

Then the rhetoric was ratcheted up even further when House Minority Leader Nancy Pelosi demanded in an official press release that all "Confederate statues" be removed from the U.S. Capitol building.

"There is no room for celebrating the violent bigotry of the men of the Confederacy in the hallowed halls of the United States Capitol or in places of honor across the country," Pelosi said in the statement.

And so now we have the President of the United States and the House Minority Leader joining a chorus of people on both sides of this issue who are truly missing the point.

Remember that the Charlottesville protests began when white supremacist groups used the city council's decision to remove the Robert E. Lee statue from a public park as a reason to march in the city. The matter is still pending in court, but instead of letting that peaceful process play out, the white nationalist groups descended on the city and that naturally attracted anti-white supremacist groups to confront them. Sadly, several violent and ugly incidents ensued, topped off by the killing of 32-year-old Heather Heyer.

Heyer's death and the injuries that took place in Charlottesville should have provided clarity about how we resolve controversies like how to deal with controversial monuments in a civil and democratic society.

But so far, everyone seems to be getting it wrong.

First off, President Trump is wrong to focus on how it would be unjust to take down statues of Lee or Jackson and then also say that monuments to Presidents George Washington and Thomas Jefferson could be next. Whether the statues are beautiful and even whether Washington and Jefferson would be "next" is not the issue.

The issue is whether the decision to remove municipal property is done with due process and certainly not via the actions of a violent mob. Even if President Trump is right that some groups calling for removing Confederate statues would also support removing monuments to slaveholders like Washington and Jefferson, his job is to remind everyone to follow the law.

That way, if people in a mob decide to next topple statues of Washington, Jefferson, or Yogi Bear, they'll be reminded that doing so is illegal. Instead his comments about the statues Tuesday and his tweets on Thursday were those of an all-too-invested proponent of the statues and what they may or may not stand for.

Just in case the president or anyone else needs a history lesson, remember that George Washington and Thomas Jefferson are simply on a much higher plain by any standard than Generals Lee and Stonewall Jackson. It doesn't mean they were evil men, and in fact Lee worked hard to promote Southern acceptance of peaceful American reunification.

But let's be frank, the statues to people like Lee and Jackson adorned in their Confederate uniforms were not erected to mark their contributions as peacemakers. Many were built in the 1950s and 60s as a form of defiance against the Civil Rights movement. That's a big reason why the president's bully pulpit shouldn't be used to defend the statues, but to defend the legal process for removing or keeping them.

Rep. Pelosi also misses the mark by grandstanding the issue with her public release. As a former Speaker of the House and someone who has been in Congress for more than 30 years, Pelosi knows, (or should know), that the statues in the Capitol's National Statuary Hall Collection are placed there by individual states who each get to choose two people they want to honor.

Neither current Speaker Paul Ryan, nor any other official not from those states, has the authority to remove them unilaterally. And as reprehensible as the Confederacy was for seceding from the U.S. mostly to defend the barbaric institution of slavery, responding to that historic barbarism with a public call to remove statues to score political points cheapens the legacy of all who fought to end slavery and crush the Confederacy in the first place.

Besides, why didn't Pelosi et al initiate a move to remove the statues when she was Speaker of the House from 2007-2011?

There's a similar argument making the rounds on social media and other places about "whether it's okay to punch Nazis." The saddest part of that conversation is that it's predicated on the complete disregard for the fact that physically attacking someone who isn't physically attacking or legitimately threatening you physically is against the law in America and every other civilized place in the world.

Making it okay to punch someone, even someone wearing horrific Nazi symbols and goosestepping across a public street, basically endorses just the kind of behavior the actual Nazis used to come to power in the 1930s.

It's more and more clear that we shouldn't want to continue to honor Confederate leaders in today's America. And it's ludicrous to compare them to the true Founding Fathers. But we can't trash the democratic process to make these kinds of cosmetic changes. It's a pity both President Trump and Rep. Pelosi have chosen to ignore everything but rhetorical arguments about what statues stand for instead of doing their jobs to uphold the law.