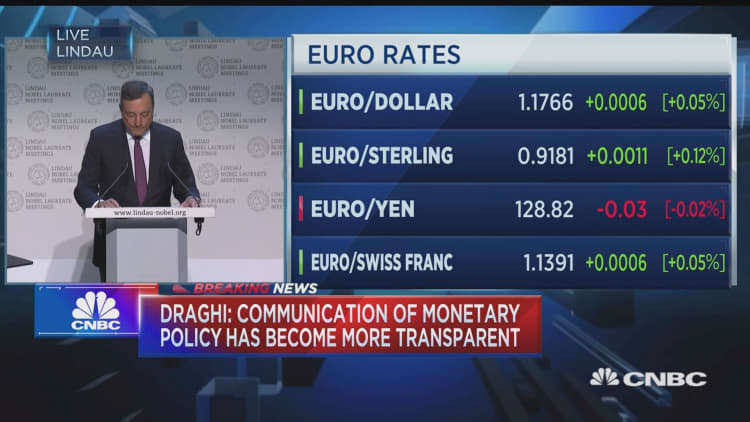 President Mario Draghi gave little indication about the next steps for monetary policy in the euro zone during a speech on Wednesday ahead of a key meeting between central bankers.

The European Central Bank chief seemed to have learned from his own mistakes by avoiding commenting on how and when he might bring monetary stimulus to an end.

Speaking at a conference in Lindau, Germany, Draghi praised economists' research and said that adjustments to monetary policy are "never easy." However, he made no reference to how the bank might adjust its own policy to the improving economic data across the euro zone, a highly debated issue among market participants.

"While forward guidance (a tool used by central banks to influence, with their own forecasts, market expectations) is a useful instrument, recent research has highlighted that its effectiveness can be improved if combined with other non-standard monetary policies," Draghi said Wednesday.

At a meeting in June, the ECB recognized the improved economic outlook in the 19-member area and the lower deflationary pressure. As a result, the bank decided to update its forward guidance to remove the reference to further rate cuts. 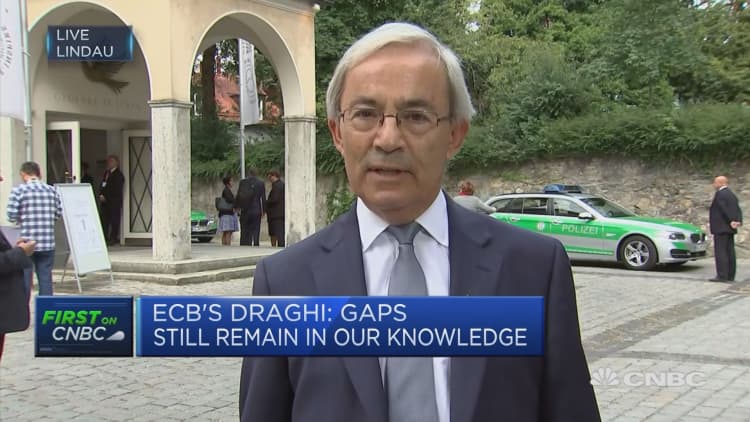 Christopher Pissarides, Nobel Laureate and professor of economics at the London School of Economics, told CNBC Wednesday that he expects a gradual tapering to be announced later this year.

"Over the next few months, in the autumn maybe come winter, we should be going back to the normal situation where these unconventional measures, as they're called, aren't used very much," he said.

Back in June, Draghi rattled markets with a speech at a banking conference in Sintra, Portugal.

"All signs now point to a strengthening and broadening recovery in the euro area," he said at the time.

Bond yields – which move inversely to bond prices – and the euro rose as investors foresaw a closer end to the central bank's monetary stimulus. Members of the ECB subsequently spent the following days telling the markets that quantitative easing (QE) wasn't coming to an end for now.

The euro was up about 0.17 percent on Wednesday against the U.S. dollar at $1.1780 after Draghi's speech and after new data showing better-than-expected PMIs (purchasing managers' index) for the bloc.

A stronger euro acts as a deflationary pressure, which the ECB wants to avoid. The euro has risen about 12 percent against the U.S. dollar so far this year, mainly on expectations of an ending to QE.

"The data is telling us the economic outlook is definitely improving," Christel Aranda-Hassel, chief European economist at Mizuho International, told CNBC Wednesday, adding that the ECB is likely to raise its growth forecasts in September. 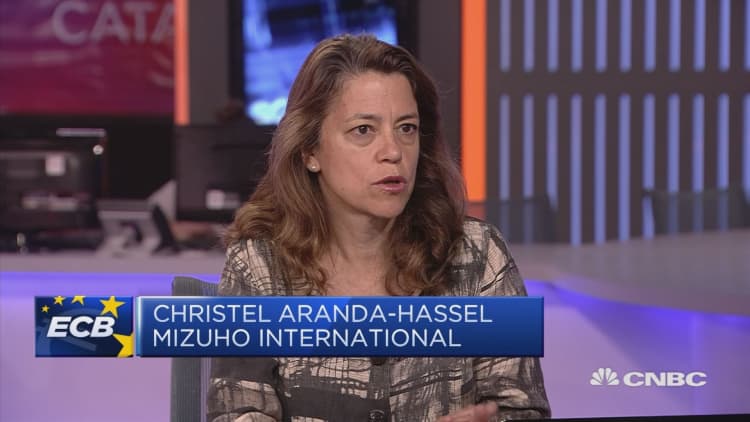 "At the same time the strengthening of the euro has put downward pressure on the other key forecasts, namely inflation."

Draghi finds himself stuck between stronger growth and a stronger euro – a problem that according to Aranda-Hassel is likely to persist.

The ECB President is due to speak at the Jackson Hole meeting this Friday, where other central bankers and policy experts will be debating monetary policy.

Market participants once again do not expect any guidance from Draghi's address on Friday.

"He will probably be very, very careful with the language this time around. I do think he will stick to the mantra, which essentially is that they are slowly but surely going towards the exit but I don't think he wants to give us any acceleration in terms of speed," Aranda-Hassel said.

WATCH: Here's why Draghi, not Yellen, is the central focus this week at Jackson Hole 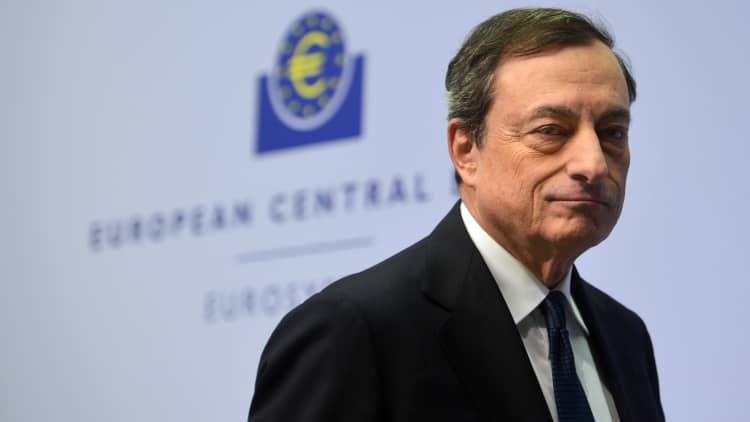 watch now
VIDEO1:4101:41
Here's why Draghi, not Yellen, is the central focus this week at Jackson Hole
Trading Nation