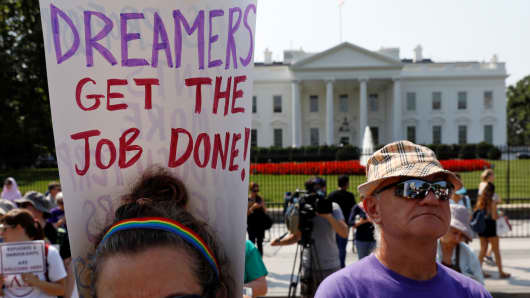 Kevin Lamarque | Reuters
Demonstrators hold signs during a protest in front of the White House after the Trump administration today scrapped the Deferred Action for Childhood Arrivals (DACA), a program that protects from deportation almost 800,000 young men and women who were brought into the U.S. illegally as children, in Washington, U.S., September 5, 2017.

When I was a child, my immigrant parents told me that I could be whatever I wanted to be and I believed them. They never impressed upon me that I should go into one profession or another. It was understood that if I worked hard, I could achieve my American Dream. And I believed them.

I believed them because that's what I learned in school, that's how I grew up in this country. With their words pushing me forward, I did just like they said. I became a role model instead of a national statistic. I achieved what many only dreamed of.

From the Barrio in the Mission District to the streets of East LA and the rural community of San Bernardino County, CA, I graduated top of my class at Bloomington High School, completed a bachelor's degree at Stanford University, and learned how to be a lawyer at the University of Notre Dame Law School. I achieved my American Dream. Achievements that no one could take away from me. Why? Because I was fortunate enough to be born in the USA.

President Donald Trump just threatened to take that American Dream away from approximately 800,000 members of our national community this week by canceling an Obama era program meant to protect them. Why? Because these human beings were not born in the USA.

In 2012, President Barack Obama issued an executive order that embraced a legal immigration concept that existed prior to 2012 called "deferred action." It is based on the premise that the United States government cannot possibly remove all undocumented individuals in this country for as much as it would like to. It identifies certain individuals who do not pose a threat to our national security and are otherwise good citizens. The government defers the action of removing them and allows them to remain in the USA.

"DACA beneficiaries will contribute $460.3 billion to the U.S. gross domestic product over the next decade—economic growth that would be lost were DACA to be eliminated."

President Obama created a program following this oft-used tool called Deferred Action for Childhood Arrivals ("DACA"). To be eligible for DACA, an individual is required to be present in the U.S. before age 16, have continuous presence in the U.S. since June 15, 2007, and be either in school or graduated from high school. Perhaps the most important part of the requirements is that an applicant cannot have even one felony or more than three misdemeanors.

The program is an incredible success and Dreamers (undocumented individuals present in the USA who arrived as youth) throughout our country came out of the shadows, bettered their lot, contributed to our economy and paid their taxes. In fact, according to Professor Tom Wong and the Center for American Progress, "[p]revious research has shown that DACA beneficiaries will contribute $460.3 billion to the U.S. gross domestic product over the next decade—economic growth that would be lost were DACA to be eliminated." They are currently employed in nearly every business sector in the USA or attending college. They are not criminals.

Larissa, Edgar, and Belsy are just like me and many others. They grew up in this country, they believed their parents and their community and they achieved what many can only dream of. The difference? They were not born in the U.S. But for all intents and purposes, they are Americans.

Now they face removal from this nation as President Trump announced an end to the DACA program. Attorney General Jeff Sessions said there will be a six-month delay in terminating the program to allow Congress to pass a bill protecting the Dreamers. Now their fate rests in the hands of a divided Congress that must come together or the Dreamers will face a return to illegal status.

Many Dreamers grew up believing they were U.S. Citizens. Many simply followed their parents into this country. We live in a country where we protect our juveniles, not allowing them to be treated as adults in our legal system, knowing that as youth, they cannot be held accountable for their actions. Yet, we are failing to protect Dreamers who have consistently proven to the world that they are contributing members of this society.

It is clear that our immigration system is broken. But until comprehensive immigration reform is passed, as a nation and as human beings, we should protect those which we have raised and inspired. I call upon our nationwide community to stand up for what's right and urge Congress to do the same. By revoking DACA, President Trump has crushed the American Dream. It is now up to the people to revive it.