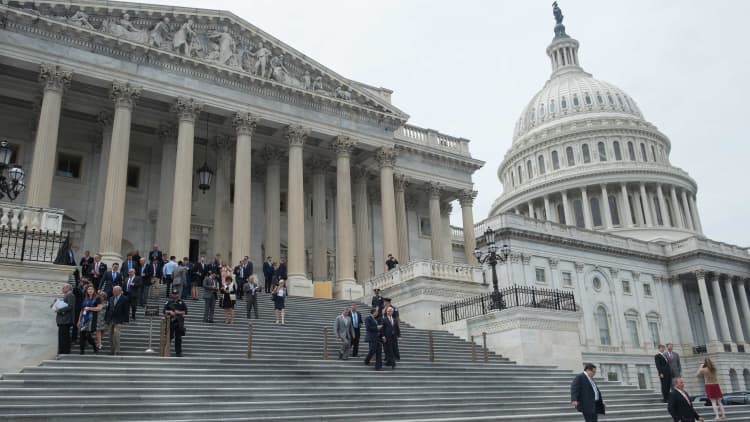 The Senate on Thursday approved a package that includes disaster aid, a debt ceiling extension and temporary government funding, sending it to the House where it will face opposition from conservatives.

The chamber approved more than $15 billion in aid funding for Hurricanes Harvey and Irma, attached to the other traditionally more controversial measures, by a vote of 80-17. The House, which on Wednesday passed a bill for just under $8 billion in aid funding, is expected to move quickly on the revised measure as the federal government faces a cash crunch while responding to two hurricanes.

If the House passes the bill and President Donald Trump signs it, Congress knocks out end-of-September deadlines to raise the debt limit and avoid risking default on U.S. debt, and funds the government and avoids a shutdown. But Congress will face the deadlines again in December, and Republican lawmakers have expressed concerns that the minority Democrats will use the votes to get concessions from the GOP.

The measure would fund the government and extend the debt ceiling through Dec. 8.

Trump agreed to the deal with Democratic congressional leaders Chuck Schumer and Nancy Pelosi on Wednesday over the objections of top Republicans. GOP leaders wanted the debt ceiling extended for a longer period of time.

After Trump and the Democrats struck the deal, Senate Majority Leader Mitch McConnell amended a House-passed bill, which would have approved just aid funding, to add the other provisions. He supported the revised plan.

Before Trump and the Democrats reached the agreement, House Speaker Paul Ryan called a short-term extension "ridiculous" and "unworkable."

Pockets of the Republican House membership, including the Republican Study Committee and House Freedom Caucus, have objected to the deal. Conservatives have often sought spending cuts to go along with a debt ceiling increase.

Separately Thursday, Trump said he would consider getting rid of the debt ceiling altogether, saying "there are a lot of good reasons" to do so.

All 17 senators who voted against the measure were Republicans. They included Sen. Rand Paul, R-Ky., who called for spending cuts to go along with an aid package, and Sen. Ben Sasse, R-Neb., who has succinctly said "the Pelosi-Schumer-Trump deal is bad."