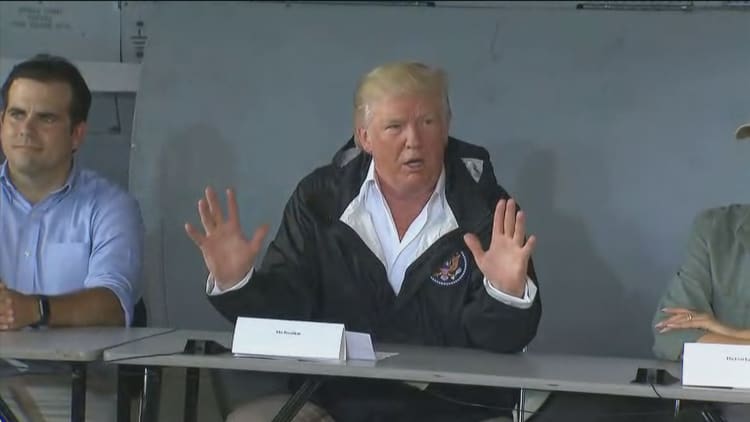 It's unlikely the self-proclaimed , but President Donald Trump's interest in the island's recovery may mean bondholders get an even smaller piece of the pie.

After visiting the devastated island, Trump said Tuesday that Puerto Rico's debt should be wiped away.

"They owe a lot of money to your friends on Wall Street and we're going to have to wipe that out," Trump told Fox without specifying details. "You're going to say goodbye to that, I don't know if it's Goldman Sachs, but whoever it is you can wave goodbye to that."

Lipton said the president doesn't have the power to wipe it out. "To my knowledge he cannot issue an executive order even though Puerto Rico is a United States territory," he said.

Puerto Rico's bonds sold off sharply Wednesday in reaction to Trump's comment. The benchmark general obligation bonds were trading at 36 cents on the dollar, down 8 cents from Tuesday and 20 cents from a week ago.

Bondholders, already expecting to see a restructuring of the $72 billion debt, may have to take an even bigger haircut now that the federal government is getting involved.

"The political overtones of it are what people are concerned about," said Curtis Erickson, head of capital markets at Preston Hollow Capital. "Can he push through some law? I don't know. Ultimately, I think there's a lot of money coming from the United States. If there's a political agenda to be driven by the president, in any form to lend money to the island, I think it would be structured to be senior to all existing debt."

Congress has earmarked some money for Puerto Rico as part of hurricane relief, and the White House has requested more.

Puerto Rico has also asked for low interest loans. Puerto Rico's current debt to GDP is about 68 percent, compared with the average for the 50 U.S. states of about 17 percent, according to Lipton.

"If the rebuild is directed by Congress and Treasury, then I guess they're going to put provisions in to make sure it all goes to the island and infrastructure and rebuilding and doesn't go to the bondholders," said Erickson.

Congress approved the process under which Puerto Rico can restructure its debt, and the vast majority of the island's credits are now moving through the Title 3 bankruptcy process.

"There is now a framework for resolving these claims ... and I would expect that was a framework that was ostensibly supported by the U.S. Senate and the House of Representatives," said Dennis Pidherny, managing director, U.S. Public Finance at Fitch.

"That is a process that appears to be unfolding," he said. "The judge is moving the issue through her court, and we expect she will continue to do so. The legislation provided a framework to do that, where none had previously existed. ... I'm not aware of any presidential powers that allow for the forgiveness."

Bondholders were already expected to lose out more in a restructuring after Hurricane Maria devastated the island.

"If nothing else, the president's visit has intensified the focus on Puerto Rico from both a disaster relief effort, as well as a debt restructuring focus as well," said Lipton. "The bondholders clearly are going to have to absorb a haircut. "

He said the debt restructuring may take even longer now that it's been complicated by the storm, which has brought Puerto Rico's economy to a halt.

"I continue to believe this is going to be a multiyear recovery and process given the number of individual credits involved, given the various structures and liens," he said. "The big question is what kind of deference will be given to the commonwealth constitution. The commonwealth constitution is quite clear that bondholders are to get paid first, even ahead of pension beneficiaries."

Some strategists said Congress would not have much appetite to take away Puerto Rico's obligations even if Trump wanted to wave them away.

Lipton pointed out that about 25 percent of the island's general obligation bonds are insured, as are 70 percent of its COFINA sales tax bonds. The stocks of bond insurance companies were under pressure Wednesday: MBIA, for example, was down about 9 percent.

Strategists said it's not just hedge funds that will get burned by a haircut. Hedge funds and distressed buyers are most active in the secondary market, but the majority of debt holders are individuals and mutual funds.

Trump didn't acknowledge the mom and pop holders in his comments on the debt.

Taking Trump's comments too literally could be a mistake. Lipton pointed to comments Wednesday from White House Budget Director Mick Mulvaney. "He basically said, 'Don't take him word for word.' What we can say is the federal government is not going to bail out the debt, and we never thought that they would, " Lipton said.