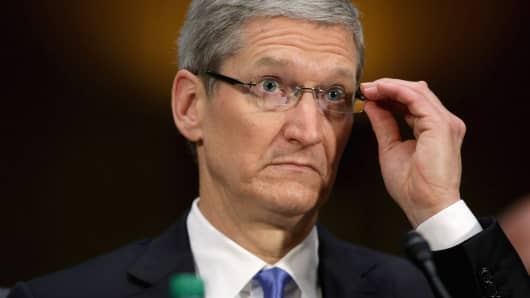 If you read the popular press today, you'd think that people are about to march on Silicon Valley and Washington D.C., with pitchforks, demanding that legislators pass laws that restrict big tech from destroying the world.

The New York Times is publishing op-eds with gobsmacked titles like "Silicon Valley is Not Your Friend," in which the author argues tech companies are about to "smash the foundations of our society," while its columnist Farhad Manjoo frequently invokes the "Frightful Five" — the five biggest tech companies by market cap, Apple, Alphabet (formerly Google), Amazon, Facebook, and Microsoft.

Meanwhile, congressional committees are calling Facebook and Google to testify about how Russia bought advertisements seeking to influence the 2016 presidential election. Tech is being blamed for everything from spreading fake news to making teenagers miserable.

But the public still loves these companies.

As Wired reported on Thursday, public sentiment towards these so-called scourges hasn't wavered at all in the past year, according to multiple polls. According to Morning Consult, Wired reports, 88 percent of respondents view Google favorably, with slightly lower numbers for Amazon (72 percent) and Facebook (60 percent).

The campaign against big tech isn't resonating, because it's based on false premises that most people see right through.

People are not coerced to use these products

A lot of the arguments against these companies hinge on the idea that people are being unfairly forced, or even coerced, to use them.

With the possible exception of Microsoft in some workplaces, this is nonsense.

Posting a new picture on Facebook or Instagram from your Apple iPhone and waiting for responses may indeed give you a hit of pleasurable brain chemicals, nudging you to use these products more and more. But so does watching an exciting TV show or movie, playing with your dog, seeing a crush on the street, and on and on. Calling for restrictions on a product because it offers pleasure to the people who use it is absurd.

What about critics like former Googler Tristan Harris, who argues that "our minds are being hijacked" by clever product designers at big tech companies?

That's correct: Companies are designing their products to get you to take actions that help their businesses.

This is part of modern capitalism and it's been around forever. Tech companies making notification buttons red instead of blue because red evokes a more urgent response are not fundamentally different from an advertisement that features happy beautiful people using a product, or the way grocery stores display products to guide you to the more profitable ones.

Criticize modern marketing or free markets, but this is not anything specific to tech. (Except that they hire really smart people who are quite good at what they do.)

These companies' products have helped society more than hurting it

This is a harder one to argue because it relies on subjective opinions about what society is and should be, and how individuals should relate to it.

Two big criticisms that come up often are fake news and Amazon hurting the retail industry.

The problem is still going on: Just last week, several sites spread false information about the Las Vegas mass shooting, and Facebook and Google did not screen it out. These are serious product flaws, and both companies need to fix them.

But the societal features that encouraged people to believe and spread these fake news stories have been building for decades now.

Political rhetoric and voters have become steadily more extreme and partisan since the 1980s, and traditional news sites have echoed that partisanship in their coverage. The motivations for this are complex, but the Washington Post offered 10 reasons for this growing partisanship back in January 2015.

Facebook was built to make the spread of ideas as frictionless as possible. If those ideas are angry, polarizing, ill-informed, ignorant (call them whatever you want) it reflects the people who are spreading them, not the platform on which they're spread.

In other words, social media is holding a mirror up to ourselves, and we don't like what we see.

It's the same with the criticism of Amazon. The company is relentless about providing low costs and convenient access to goods in the form of ever-faster delivery. Along the way, it plays hardball with suppliers, is sometimes sloppy about policing goods sold through its marketplace, and makes aggressive and surprising strategic moves like buying grocery store chains.

But overall, the criticisms of Amazon sound a lot like the salvos leveled at Wal-Mart a decade or two ago, when its convenient massive selection and low prices drove small-town retailers out of business.

Many Americans like buying stuff. They want that stuff as fast and as cheap as possible. Amazon is riding that wave, not creating it.

So what's really going on?

The loudest voices against tech right now come from two places: Democrats in Washington — like Virginia Senator Mark Warner, who has been among the loudest critics of Facebook — and the mainstream press.

These are, perhaps not coincidentally, two groups that were among the most surprised by the election of Donald Trump as president. In their continuing quest to figure out what went wrong, they've set upon the one sector of society that enjoyed almost universal praise during the Obama years. Remember how social media was once lauded for driving pro-democracy demonstrations, and allowing the distribution of unfiltered video of police killing unarmed citizens?

It's particularly ironic for Democrats to attack the tech industry, given that Silicon Valley billionaires are among their largest and most reliable contributors, and that employees at tech companies vote overwhelmingly Democratic.

Attacking tech is also convenient for media companies as they realize that Google and Facebook are winning the war for attention and advertising dollars online, and there's no change on the horizon.

The tech industry and its products are far from perfect. Tech companies and leaders often talk in ways that make them sound dishonest and out of touch. The gains created are not spread equally. There are some questionable and perhaps unethical decisions being made by people working in the industry (as is the case in every industry).

But overall, tech has given us more access to information and knowledge, more ways to communicate and easier access to goods and services than we did decades ago. You can use the tech industry as a scapegoat for an election result you didn't like, or for driving your favorite bike shop out of business, but I'm not buying it.

Neither are most other Americans, if the polls are to be believed.