The House tax bill is expected to slash the corporate tax rate to 20 percent and would bring changes that affect the way dozens of industries and companies do business.

One big immediate boon that would help companies across the board is a proposal to allow companies to expense 100 percent of capital expenditures. That should immediately boost infrastructure spending and help a wide variety of companies in that field.

The House bill is expected to face revisions and ultimately needs to match up with a Senate version, also working its way through the system. President Donald Trump said Tuesday the goal is to have legislation enacted by the end of the year.

Clifton said a notable negative provision he expects to see is a new minimum tax on non-U.S. companies doing business in the U.S. This would also affect U.S. companies that 'inverted' or moved their headquarters overseas to avoid the 35 percent U.S. tax rate. 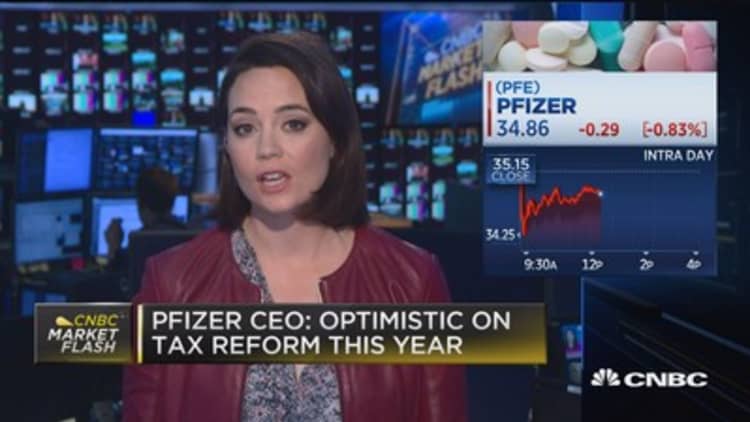 The stock market has priced in some broad, positive sentiment from the pending tax legislation, but Clifton and other analysts say the nitty-gritty detail has not been priced in. For instance, companies that have high tax rates and would benefit most from a tax cut are lagging the performance of the S&P 500.

Clifton said the bill would include a low tax on unremitted foreign earnings both on cash and a lower rate on money that has already been spent. Companies could get eight years to pay off their tax bills, but a cash horde would be moving back to the U.S., according to Strategas.

The U.S. would then have a territorial tax structure allowing U.S. companies to earn income outside the country and repatriate earnings back to the U.S. for free or at a low rate, according to Clifton. This would affect companies with big cash piles outside the U.S., such as Apple, Microsoft or Oracle.

Clifton said some of the same group of U.S. multinationals, companies with a lot of intangible property located overseas, also could be affected by a new tax. There is a proposal to tax intangible property overseas at 10 percent as a way of discouraging companies from shifting intellectual property outside the U.S., he said.

One change is coming in the way that companies can deduct interest expenses, according to Larry McDonald, head of U.S. macro strategy at ACG Analytics.

"On the corporate interest, the deduction is just going to go down to 70 percent. Companies that issue lots of debt would be losers there, like a Macy's. If you're a big debt issuer, you're not going to be able to deduct the full amount," said McDonald.

McDonald said of all the "pay-fors" that are being floated, he is confident that the interest deduction changes would be included in the bill.

Strategas Research has identified many possible winners and losers in corporate tax reform, based on past initiatives and proposals.

The removal of deductions and tax credits could certainly affect some industries in a big way. For instance, "there could be a provision that no longer lets companies deduct their advertising expenses," said Clifton. The end of that provision could be an immediate blow to advertising companies but also send ripples across the media sector.

Tax credits may also be dropped for orphan drug makers as well as the electricity generated by certain renewable energy sources, according to Clifton. There could also be changes in the way life insurance reserves are computed. Cruise lines and reinsurance companies based outside the U.S. could also see changes in the way they are taxed. The bill could repeal special amortization for pollution control facilities, according to Strategas.

"It could be very top line market moving ... very much in the weeds for specific companies and industries. [Wednesday] is going to be a huge deal. A lot of mischief can happen in a thousand pages," Clifton said, noting the House document is likely to be extremely thick.

The big winners should be "companies with a lot of domestic U.S. income. These include high tax rate and small-cap stocks," Clifton said. This group would also include railroads, managed-care companies and homebuilders.

One sector that has been spared is U.S. domestic oil and gas, and Clifton said he believes the intangible drilling credit will stay intact.

The long-awaited legislation was also to have included a plan to phase in the new corporate tax rate from the current 35 percent over a three-to-five-year period. That proposal, which appeared in news reports Monday, has already been viewed as a negative by the markets since there would not be an immediate corporate earnings pop for next year.

When asked if he was looking into phasing in corporate tax-rate reductions, Trump responded, "We're not looking for that, hopefully not."

But Clifton said the House tax writers may have been sending out trial balloons on the phase-in idea to show Trump that they were having trouble getting to his 20 percent target. Clifton said his base case is for a 23 percent tax rate after the plan is reconciled with the Senate.

In the bond market, yields slipped Monday when reports circulated that corporate tax cuts could be phased in, meaning they would have less immediate economic impact. Yields move opposite price. On Tuesday, yields were slightly higher.

"For now, fixed income investors find solace in the promises of US tax reform/corporate tax cuts. However, any failure to pass these tax changes (or even a diluted package) could affect investor sentiment," notes George Goncalves, head of fixed-income strategy at Nomura. 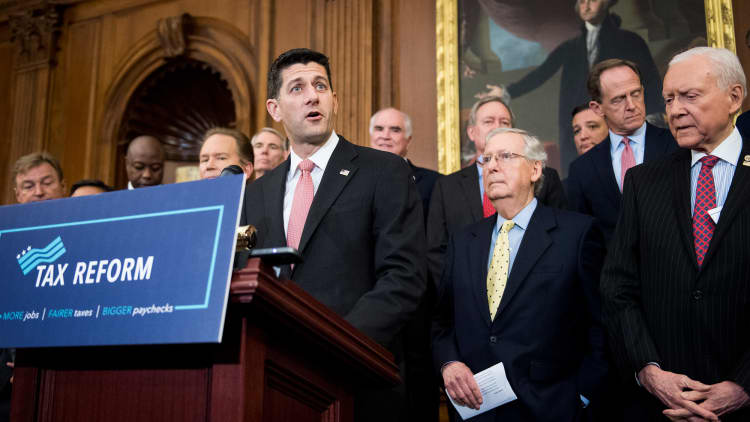