Here's how to get rich tax cheaters to pay up 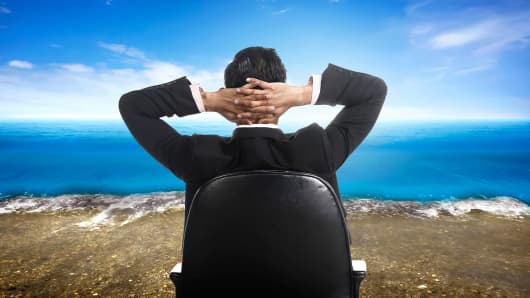 What's the biggest takeaway from the "Paradise Papers" leak?

Notice I didn't write "tax reform." Because there's an important difference. While the GOP tax reform plan and other proposals using that term over the decades often include some rate cuts, they also throw in other changes that usually amount to more confusion and even an increase in tax liabilities for a lot of people and companies. The many additional parts of the current Republican plan that include eliminating many deductions are a good example of that.

The better approach is simplicity. Instead of creating a whole new set of winners and losers with changes to rules and eliminated or created deductions, the best way to provide tax relief is to simply cut the tax rates. And cutting them across the board for individuals, big companies and small companies makes the most sense.

That brings us back to how the Paradise Papers and their predecessor the Panama Papers show us just how far from simple it is for these specialty law firms to provide wealthy and/or politically-connected individuals legal and illegal tax shelters for their money. Some of the machinations these law firms use to keep this money tax free are extensive and complicated. And most importantly, they aren't free.

"This will seem like a big gift to the rich. That's why any such rate cut announcement must come simultaneously with a detailed and powerfully-worded plan on harsher enforcement and punishments for those found to still be evading taxes."

That's where cutting rates as part of a "carrot and stick" policy comes in when it comes to the super rich. Their wealth will likely always make it possible for them to keep hiding their money from the tax authorities in one new scheme after another. The stick should come in the form of new investigative measures and penalties for using illegal tax shelters. The carrot should come in the form of reducing the tax rates that encourage all the tax sheltering shenanigans in the first place.

Well, almost all. We know from the Panama Papers scandal that some of this offshore sheltering is done to conceal criminal activity in what amounts to money laundering. But law enforcement authorities all over the world would surely be aided by separating the criminals from account holders in these offshore firms who are simply looking to avoid some tax bills. A study published by the IMF in 2008 essentially said the same thing, arguing that, "In a way, tax evaders protect each other by tying down the tax authority's limited capacity." Crooks are finding some kind of safety in numbers.

There's plenty of evidence that the answer is "yes." Detailed studies published over the past 20 years, include that IMF-paper mentioned above and another published by the National Bureau of Economic Research, that show that higher tax rates in the U.S. and other countries encourage and foster more tax evasion while lower rates do the opposite. Other papers published by the Tax Foundation show how higher rates take hundreds of billions of dollars out of the economy. These are just some of the reasons why many have argued for years, starting with President John F. Kennedy in 1962, that lower tax rates actually bring in greater tax revenues.

And then there's another factor that's become clear from this Paradise Papers revelation. As America learned the hard way during the Prohibition era, unrealistic or overly harsh laws can increase or even heighten the problems and criminality that those laws were meant to reduce in the first place. In that light, the IMF paper referenced above noted that higher tax rates create a virtual syndicate of wealthy tax evaders who, "protect each other, because they tie down limited enforcement capacity" across the world.

That may sound like a conspiracy theory of sorts, but consider the powerful names revealed in both the Paradise Papers and Panama Papers and you'll see that these are already some of the most politically powerful people in the world. In addition to people like President Donald Trump and Russian President Vladimir Putin, we have Commerce Secretary Wilbur Ross, Bono, and even Queen Elizabeth II.

Reducing the rates will not erase offshore tax haven activity completely. But it will eliminate a big incentive for it that will lead to more domestic investment and tax revenue.

The only trade-off that some politicians may not want to swallow is that this will seem like a big gift to the rich. That's why any such rate cut announcement must come simultaneously with a detailed and powerfully-worded plan on harsher enforcement and punishments for those found to still be evading taxes. The carrot and the stick need to be revealed at the same time for the best impact. The problem is, most proposals in the U.S. and other countries that call for either lower taxes or increased tax enforcement come as one without the other. Neither can really work on their own.

Class warriors will still complain that all this will do is allow the rich to keep more of their money without having their lawyers jump through hoops first. But leave that to the class warriors. This seems like a small price to pay for whatever additional wealth we can get back into this country.

This isn't hard. Lower costs attract more compliance, whether we're talking about taxes or people paying for items at stores instead of shoplifting. Let's stop encouraging the kind of criminal and/or sketchy behavior revealed in the Paradise Papers and give our economy a shot in the arm.