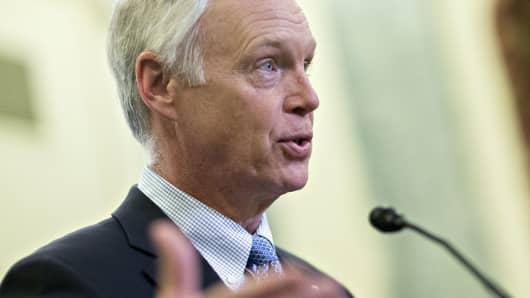 One of the key Democratic Party complaints about the GOP tax reform plan has been the argument that it doesn't do enough for small businesses and the middle class. And now we have a potential game-changer with Wisconsin Republican Senator Ron Johnson essentially joining in the same chorus and vowing he won't vote for the bill in its current form.

Johnson's main objection is the fact that the Republican tax reform bills in both the House and Senate do not cut tax rates as generously for smaller businesses that are taxed at so-called "pass-through" rates. To be specific, the current GOP tax reform bills in both houses of Congress slash the corporate rate from 35 to 20 percent. But sole proprietors, partnerships, and S-corporations currently taxed at individual income-tax rates as high as 39.6 percent, would only see a reduction to 25 percent in the House bill and an even smaller reduction in the current Senate version.

A report surfaced Wednesday that the Senate GOP will make further changes to the "pass-through" tax cuts, but Johnson is clearly not happy with the process so far.

Johnson is trying his best not to appear to be a spoilsport about this. Appearing on CNBC's Squawk Box Thursday morning, he talked repeatedly about how he wants to fix the problem to get a bill passed. He even said that President Donald Trump promised him to address the issue, quoting the president as saying "I will work my tail off over the weekend to fix this problem."

But nobody really needs to work anyone's tail off here. The best move for the White House and the congressional GOP is to simply call the Democrats' and Johnson's bluff and just cut the rate on pass-throughs to 20 percent, and find one or two more places to cut individual middle class taxes too.

And when they do that, they can sit and watch as the Democrats and maybe a few wary Republicans like Johnson have the audacity to move the goal posts again. I'd give the chances of that happening even money.

That's right. Here's what they'll say: How can the Republicans further cut taxes without facing a major backlash from conservative deficit hawks and non-partisan fiscal watchdogs? Won't more tax cuts reduce revenues more and add to the already scandalous $1.7 trillion the CBO estimates the Republican tax reform will add to the debt?

Can we get real please?

All this hand-wringing and crying about reduced tax revenue is really beside the point. Revenue is not the problem. Even if record amounts of it came pouring into the Treasury say, right now, government spending would not be able to balance the books anyway. How do we know this? Because it just keeps happening. It happened again last month as the federal government took in a record, as in record high, $235.3 billion in tax revenue. But it still ran a deficit for October of $63 billion.

Have a nice day.

With record inflows still not stemming the tide of irresponsible spending, worrying about revenue is like worrying about whether an alcoholic is getting enough booze.

When members of Congress from either party focus on revenues without promising major spending cuts and reforms it's just a distraction technique. The problem is spending and out of control liabilities Washington refuses to reform like Social Security and Medicare. The government needs to learn some fiscal restraint.

Good luck with that.

With that in mind, let's get back to the current realities facing the Republicans and this tax bill. They can keep pretending that the tax reform battle is about revenue balance sheets and deficits or they can start to realize they must do a better job of convincing the public to get behind the idea.

Speaking of the public, the latest polls show they basically hate the GOP tax reform plan. When the voters are telling the pollsters they don't believe or like the tax cuts Washington is promising them, it's time to make a different and more believable promise.

The Republicans almost got there with the doubling of the standard deduction that the overwhelming majority of tax filers would enjoy. But then they messed much of that up by eliminating many other deductions that benefit a lot of those same non-itemizing tax filers. The simple fix for that is to keep that plan to double the standard deduction and stop messing with everything else.

But doing that, along with allowing smaller businesses to get in on that 20 percent corporate rate still won't be enough if people like President Trump, Speaker Paul Ryan, and other Republicans don't do a better job of selling the plan to the public. To do that, they'll have to make those middle class tax cuts the first and last thing they talk about in every interview, rally speech, and tweet. Otherwise, the Democrats, the news media, and plenty of Republicans will still see it as a giveaway to the rich.

Both parties have an ugly not-so-secret secret that they do not really do very much for the middle class. But when they stop even pretending to put the middle class first, they really fall flat on their faces. Every other concern the GOP tax reformers have about the fate of their bill pales in comparison to losing the argument about middle class tax cuts. Senator Johnson is doing them a favor really in pointing this out. They ignore him, and the polls, at their great peril.