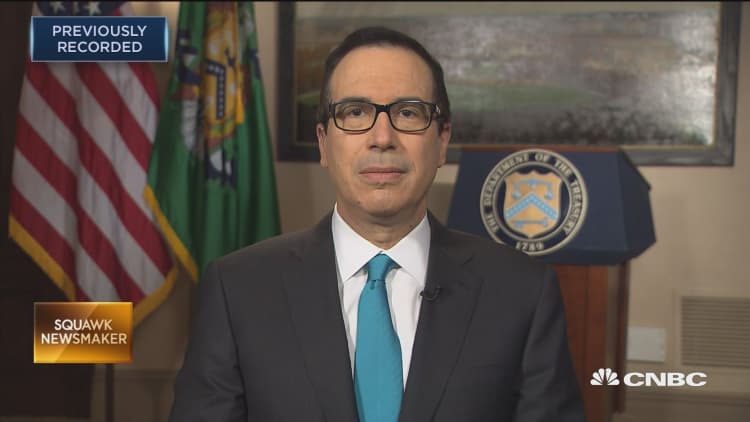 The House Republican tax bill will place a higher burden on those who earn more than $1 million a year but provide a break to everyone else, Treasury Secretary Steven Mnuchin said Friday.

Speaking a day after the GOP-led chamber passed the controversial reform measure, Mnuchin told CNBC that the benefits will go to lower- and middle-income people, and even the rich will find benefits through other provisions.

"The objective of the plan is to simplify taxes and level the playing field," he said on "Squawk Box."

However, the plan has come under fire, particularly from those in high-tax states like New York, California and New Jersey, which will get hit under a provision that eliminates the deduction for state and local taxes.

Opponents say that measure is a stealth tax hike on the middle class.

"We're getting the federal government out of subsidizing states. That obviously does impact the high-tax states," said Mnuchin, who added he is "sensitive to this issue" as he has lived in both New York and California.

The plan aims to compensate for eliminating the so-called SALT deductions by doubling the standard deduction for filers who itemize. In addition, the bill collapses the current seven tax brackets down to four, reduces the rates across the board, and lowers the corporate tax levy from 35 percent to 20 percent.

In addition, pass-through businesses, a class under which most small firms fall, would get a break.

The Tax Policy Center, for instance, concluded that by 2025, almost all of the benefits would accrue to the top 1 percent, while upper-middle-class payers would see higher taxes and those at the lower levels would receive only modest benefits. Others point out that rising deficits would put pressure on social programs that benefit the lower end of the spectrum.

The administration contends that the tax cuts will generate growth and allow companies to hire more workers at higher wages.

The bill now moves to the Senate, which also has its own version. Mnuchin said he thinks the final measure will reach President Donald Trump before Christmas.