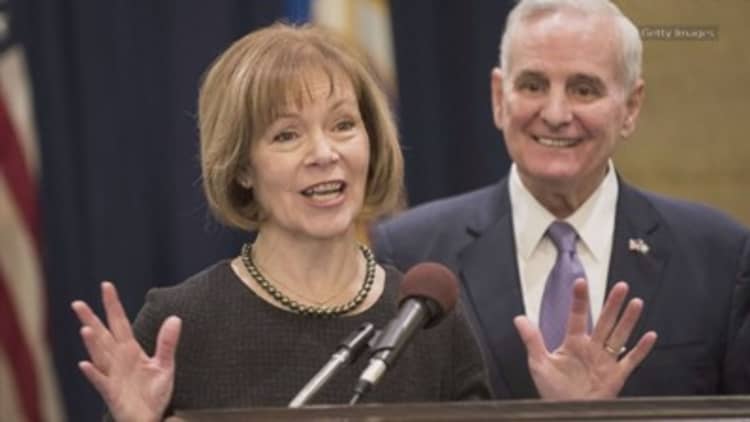 Last week, Franken announced his plan to step down in the "coming weeks" as most of the Senate Democratic caucus pushed him to resign.

Dayton said he will appoint Smith, 59, to serve until January 2019. She will have to compete in a special election for the seat next November. If she wins that race, she would then have to run again in 2020, when Franken would have faced re-election.

After some questions about whether she would run in that special election next year, Smith committed to doing so on Wednesday.

"I accept this appointment, and it will be my great honor to serve Minnesota as United States Senator," Smith said in a statement released by Dayton's office. "Though I never anticipated this moment, I am resolved to do everything I can to move Minnesota forward. I will be a fierce advocate in the United States Senate for economic opportunity and fairness for all Minnesotans."

Smith has been Minnesota's lieutenant governor since 2015, according to the state's website. She was previously Dayton's chief of staff.

Smith has taken a visible role as a proponent of Dayton's agenda in the state, according to the Star Tribune. She declined to run for governor next year, when Dayton will not seek re-election.

In a statement Wednesday, Dayton called Smith "a person of the highest integrity and ability." He highlighted her role in expanding paid parental leave in Minnesota, fighting against wage theft, battling the opioid crisis and advocating for clean energy.

In a statement Wednesday, Rep. Keith Ellison, D-Minn. — a prominent member of the party's liberal wing — signaled that he would not challenge Smith for the Senate seat next year.

"Tina Smith is the right person at the right time and has my full support both now and when she runs in the 2018 special election," Ellison said

Republicans likely see opportunity in Minnesota next year. Democratic Sen. Amy Klobuchar will also have to defend her seat.