Oprah 2020? Here's a much better bet for the Democrats 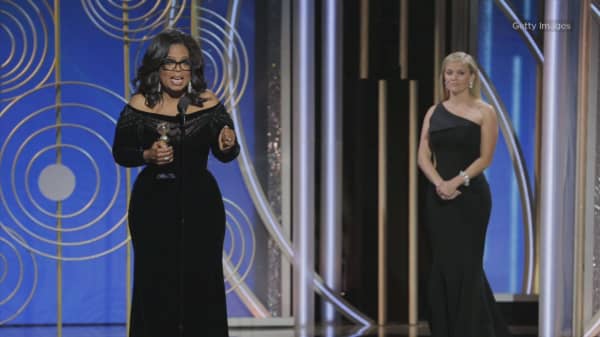 After her stirring speech at the Golden Globes award ceremony Sunday night, the idea of Oprah Winfrey running for president in 2020 is once again gaining steam.

There are now even reports that she is seriously considering the idea.

The outpouring of support for Oprah in the hours since her speech is a testament to just how popular and powerful she is as a celebrity and a spokesperson for any given cause.

Now, the hashtag #Oprah2020 is out there, pushing her to take on President Donald Trump in the next election.

There is no denying Oprah could be a formidable opponent. She scores the highest possible marks for name recognition, financial backing (from her own large fortune), and she has a dedicated base of support. People have been speculating about the possibility of her running since last year.

But we still have no examples of Oprah speaking for herself as a candidate or attacking a political opponent, which flex different muscles than pushing causes, businesses or movies. It's a key difference between her and President Donald Trump, who had spent years promoting himself and launching attacks on his political opponents long before he became an official candidate.

That's the key difference that Winfrey and the Democrats should focus on if they want to take full advantage of her powerful and proven assets. The better key to victory for the Democratic Party in 2020 isn't in Oprah the candidate, but Oprah the promoter.

Oprah can make a book a best-seller in an instant. She can make a reviled celebrity likable with just one special interview. Most importantly, she can help a relative newcomer to national politics overtake a prohibitive favorite to win a presidential nomination.

We know that last part because that's what Oprah did for then-Sen. Barack Obama in the years between his big 2004 Democratic National Convention speech and his eventually successful 2008 primary run against Hillary Clinton. In September 2006, Oprah went public with her support for Obama for president for the first time. A month later, she featured him and his book "The Audacity of Hope" on her show. For the record, this was all five months before he officially announced his candidacy.

A detailed study of Oprah's involvement in Obama's campaign concluded that her support was worth 1 million primary votes and made the difference in his winning the nomination in 2008.

In short, what we really know about Oprah Winfrey and politics is that she is a powerful kingmaker. Or, to use a term than may be more accurate for 2020, she's a very likely "queenmaker." In that capacity, Oprah can be a real savior for a Democratic Party that still lacks a list of any serious contenders for president in 2020.

With that in mind, if you're looking to identify the most ambitious and smart Democrats in America today, look for the ones who make a point of meeting with Oprah and publicly asking for her support. Whomever the Democrats choose to run in 2020 will still have to be more persuasive than Trump to win. But getting Oprah's support as early as possible is a great way to prove anyone's persuasive chops.

The alternative is that Oprah and the Democrats go out on much thinner ice and bet on her directly. That's a bet that threatens her brand and also would basically confirm that the Democratic Party is basically irrelevant. After all, if a party demands no actual political experience or dues-paying to gain its highest level of support, what's the point of a political party in the first place?

The good news for the Democrats is that the longer Oprah's name gets bandied around as a possible presidential candidate, the more valuable her endorsement will be in a year or so when the serious running begins.

Oprah the candidate is iffy both for her personally and the Democrats as a party. But Oprah the powerful and influential party placeholder is almost a sure winner for both.