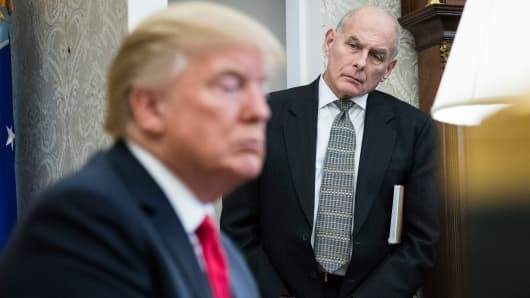 The Rob Porter domestic abuse scandal is more than just another bout of bad publicity for the White House. It's an actual dilemma that leaves President Donald Trump with no great options, only differing levels of bad choices.

The key is what Kelly knew about the evidence of Porter's domestic abuse record, when he knew it, and what he did about it when he did know it.

That scenario would be a fireable offense in any setting. It depicts Kelly as covering up a serious allegation and then ordering others to lie about the cover up. If that's accurate, Trump clearly needs to remove Kelly as soon as possible.

On the other end of the spectrum, it may be true that Kelly was not informed fully of Porter's record until much more recently. White House counsel Don McGahn would likely be the bigger culprit in that scenario since he was the one keeping Kelly apprised of the Porter situation.

Several news reports on the timeline of the Porter story show that McGahn first informed Kelly in November of problems with Porter's security clearance. That clearance was held up apparently because of those domestic violence accusations, which could have made Porter vulnerable to blackmail forcing him to hand over money or sensitive government information.

But just how much McGahn told Kelly is in question.

That second scenario should still result in Kelly's resignation, even if McGahn is also fired for keeping too much vital information from his boss. The simple reason Kelly should go down with McGahn in this scenario is because a chief of staff needs to inspire loyalty and efficiency in the staff. If Kelly was being kept in the dark, then Trump needs to fire the people who kept the truth from him and still hire a new chief of staff who can inspire more honesty and integrity.

There's a precedent for this angle. President Ronald Reagan fired his chief of staff Donald Regan in 1987 mostly because of his inability to properly protect the president from the intricacies and intrigue of the Iran Contra scandal. Even Reagan's substantial popularity took a hit during that period, and someone inside the White House had to pay.

But the Porter situation is especially toxic for the Trump administration, and not just because Trump does not enjoy the kind of popularity Reagan did. It goes beyond personnel matters, honesty and cover ups. It's more dangerous to the Trump team because it is tied to women's issues, the #MeToo wave, and the sexual harassment allegations made against Trump himself in the past. Even some critics on the right believe the Porter controversy is just more proof that Trump and his entire administration are hostile to women's issues.

That brings us to another reason why all the options for Trump are bad. One could argue that firing Kelly presents Trump with a good opportunity to declare a "no tolerance" policy for sexual assault and harassment among the White House team. He could go a step further and challenge congressional Democrats to follow the same no tolerance policy or even oust someone like Delaware Sen. Tom Carper, who has admitted to slapping his then-wife decades ago.

Any such attempt to play the "what about the other guys?!?" game is a dead end for many reasons for this president. He can't really go there because of the harassment allegations against him personally. It may be just as dangerous for him to focus on physical abuse as sexual misconduct because there's often a very fuzzy line between them. For Trump this is a dangerous minefield in every direction.

That leaves Kelly stepping down quietly and the president not commenting about it as the least bad scenario. It's still not going to look good for a White House staff that seems to be in constant chaos and flux. But the appearance of a White House organization in disarray is still preferable to what comes off as a lack of decency and tolerance for damning evidence of domestic abuse, not to mention serious security lapses.

This is indeed a real scandal for the Trump administration. Real damage has been done and more will come. But what the president does next will determine just how serious that damage will be.