EU stands up in the battle against US ‘bullies’ 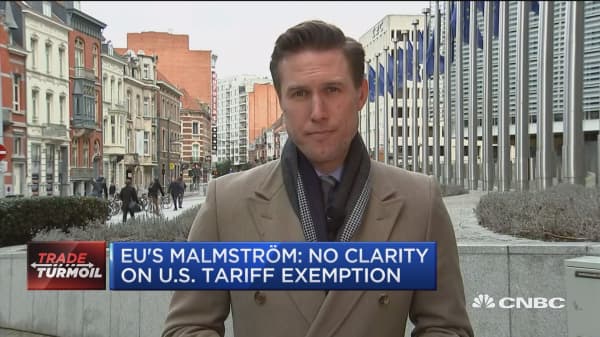 Clarity is the mot du jour here in Brussels, with so little of it forthcoming from Washington D.C. on the subject of trade and tariffs.

European Commission officials have been trying — thus far in vain — to understand whether proposed U.S. tariffs on steel and aluminium will end up impacting their 28 member states.

Last week, the European Commissioner for trade, Cecilia Malmstrom, repeatedly insisted that she did not buy the American pretext for introducing tariffs, that of national security, in particular when applied to ostensible allies on this side of the Atlantic. She said the European Commission would take its case to the World Trade Organisation in Geneva and push to have any U.S. measures reversed; she told me that Trump's position was "politically hard to understand, but also legally hard to make the case."

But after a long-scheduled weekend meeting with U.S. Trade Representative Robert Lighthizer, Malmstrom used another bit of neat diplomatese — she described her discussions with Ambassador Lighthizer on Saturday as having been "frank." Translation: far from cordial. And that should come as no surprise, after the Trump administration very suddenly signed off on tariffs of 25 percent on steel and 10 percent on aluminium, a move that not only roiled financial markets in the short-term, but may leave more lasting damage by upending the tradition of well-choreographed conversations on trade that have characterized U.S.-Europe relations for the past decade or so. 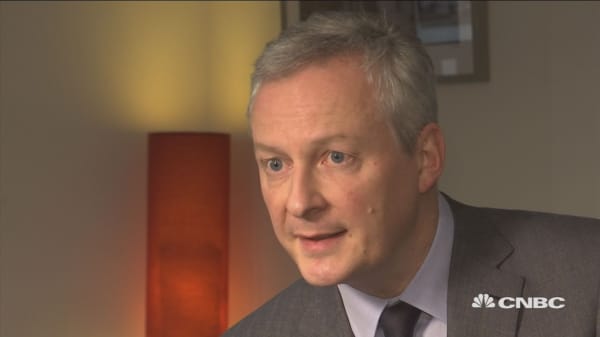 So far, the U.S. government has not even been able to give its trading partners, including Europe, a set of guidelines that would allow them to win exemption. And when Donald Trump tweeted on Monday that his Commerce Secretary Wilbur Ross would be meeting with EU representatives soon, Commission officials minutes later said they had no idea what he was talking about, or whom.

Malmstrom addressed a trade forum on Monday with a thinly-veiled reference to the current incumbent of the White House, insisting that Europe would "stand up to bullies" and would not be intimidated by threats. The EU says it is not prepared to open new trade negotiations in order to gain exemption for the tariffs, and one Brussels think-tank director told me that making any such concessions would mean giving in to blackmail.

Instead, the Commission has announced a three-pronged strategy that is primed for use and which seems to have been well-received by both business leaders and politicians across Europe. Dutch Finance Minister Wopke Hoekstra told me that Trump's tariffs were a bad idea for citizens and workers on both sides of the Atlantic, while France's Bruno Le Maire said that "protectionism was a dead end" and that EU members must respond firmly as a united bloc. Meanwhile, Germany's new economy minister, Peter Altmeier, hoped the situation would soon deescalate, and was keen to emphasize that the European response remains solely on paper at this stage. 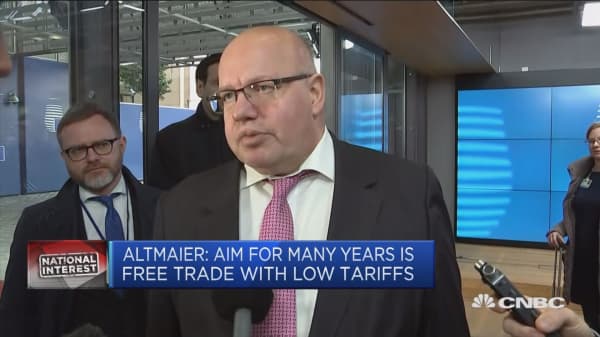 But, however hypothetical the proposals are from either side, industry and businesses remain understandably concerned. An American brand at the center of the current spat, Harley Davidson, sells thousands of motorbikes a year across Europe and would struggle if targeted tariffs against its U.S.-manufactured products were introduced. One Harley dealer in Belgium acknowledged his sales would take a sizeable hit if the already steep asking prices (some larger "hogs" retail for more than 50,000 Euros) were pumped up a further 25 percent. Meanwhile, the European Steel Association told me there could already be some damage to producers in mainland Europe, with shipped steel from elsewhere diverted from the U.S. to European ports in advance of fresh tariffs, and its potential to drive down local prices.