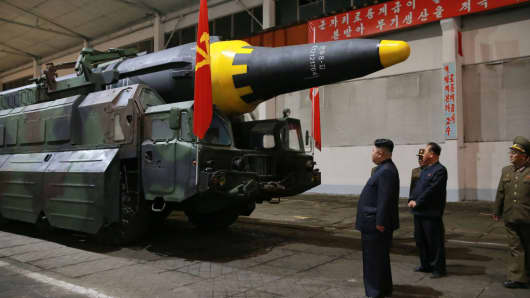 On Friday, South Korean President Moon Jae-in met with North Korean leader Kim Jong-un to begin a process that many hope will result in the denuclearization of North Korea.

If successful, President Donald Trump will meet with Kim Jong-un in the following weeks to potentially strike a deal that few thought was possible only months ago.

While it is understandable that North Korea's denuclearization will be the focus of those talks, the joint American, British, and French response to Syria's use of chemical weapons on its own population underscores why Japanese Prime Minister Abe Shinzo has pressed President Trump to also include the elimination of North Korea's chemical and biological weapons in any agreement with Pyongyang.

According to the Panel of Experts, North Korean technicians have worked at Syrian chemical weapons facilities at Adra, Hama, and Barzah, likely one of the facilities struck in the recent attack.

North Korea is not merely willing to sell chemical weapons to other states; it has also demonstrated a willingness to use them. In Malaysia last year, North Korea assassinated Kim Jong-un's half-brother Kim Jong-nam in public at the Kuala Lumpur International Airport with a VX nerve agent, which is banned by the Chemical Weapons Convention.

What's in the stockpiles

In addition to chemical weapons, North Korea also possesses the capability to cultivate biological weapons. According to the South Korean Ministry of Defense, North Korea is capable of cultivating biological agents such as anthrax, small pox, and other pathogens. Other sources have suggested that North Korea can produce pathogens such as cholera, the plague, and dysentery.

North Korea should make a full declaration of its chemical and biological weapons, it should agree to fully dismantle its programs and not reconstitute them, and it should agree to become a party to the Chemical Weapons Convention.

Let's not repeat the mistakes of Iran deal

Inevitably, North Korea will seek sanctions relief as part of any agreement to give up its nuclear program. However, as part of UN Security Council Resolution 2270, North Korea is required to follow through on its obligations under the Biological and Toxic Weapons Convention, as well as to join the Chemical Weapons Convention and meet the commitments it would entail. Until it takes those steps, UN sanctions should not be loosened.

One of the criticisms of the Iran nuclear deal is that the agreement did not address Iran's ability to conduct missile tests and to engage in destabilizing activities in the Middle East. In essence, that the agreement was incomplete.

While the elimination of North Korea's nuclear capability is the most important objective for the upcoming talks between President Trump and Kim Jong-un, an agreement that does not also address North Korea's chemical and biological weapons capabilities would also be an incomplete agreement.

Commentary by Troy Stangarone, the senior director for Congressional Affairs and Trade at the Korea Economic Institute of America. The views expressed here are the author's alone.