Skip Navigation
Fired Up3 money moves that helped these Americans quit their jobs and move abroad
Ryan Ermey
WorkWhy does work feel so dysfunctional right now? Experts weigh in
Jennifer Liu
MoneyThis mom makes $760K a year in passive income—and lives on a sailboat: 'I work...
Michelle Schroeder-Gardner, Contributor
US billionaire investor Warren Buffett flips over a Dairy Queen Blizzard treat, the most successful product ever released in the history of Dairy Queen, a US desert chain with over 300 stores in China, at the opening of a new branch in Beijing on September 30, 2010.
FREDERIC J. BROWN | Getty Images

Billionaires Warren Buffett and Mark Cuban have a taste for the finer things in life, like Dairy Queen.

It wasn't the first time the two stopped at Dairy Queen.

In June 2018, Clark Ruby sat down for a quick lunch at his local Omaha, Nebraska Dairy Queen, a fast food chain that serves ice cream, chicken strips and cheese burgers. After sliding into a booth with his tray, he heard a voice he recognized.

"That sounds a lot like Warren Buffett's voice," Ruby thought to himself.

"I look over my shoulder, and sure enough, it's him," Ruby tells CNBC Make It with a laugh. The renowned investor and Omaha local, now worth $88.6 billion, was merely feet away, sitting down to lunch himself.

While getting up to refill his fountain drink, Ruby stole a glance at Buffett's table to see who was dining with him.

It was Mark Cuban.

Cuban, who owns the Dallas Mavericks NBA team and co-hosts ABC's "Shark Tank," is a billionaire himself, worth $4.1 billion.

"We are friends that like to get together and chat," Cuban tells CNBC Make It of the Dairy Queen lunch with Buffett.

"Dairy Queen and the chance to listen to and learn from a legend is always worth a trip," Cuban adds.

At least some of the conversation revolved around basketball, Buffett's representatives confirmed to The Omaha World-Herald. One Dairy Queen customer told KETV in Omaha that he saw the pair jokingly comparing wallets to see who had more cash on hand.

But for all of the deep pockets at the table, the meal was simple. "I had a [chili] cheese dog and a small ice cream," Cuban tells CNBC Make It.

Buffett is no stranger to DQ's Dilly Bars and Blizzards. Berkshire Hathaway bought Dairy Queen in 1998 for $585 million, and Buffett often pops by the chain's Omaha locations with his great-grandchildren.

At one time, his favorite order there was vanilla soft serve topped with chocolate syrup and malted milk powder, The Wall Street Journal reported.

And at an Omaha lunch in 2015, Cuban saw Buffett order something similar.

"[We're] starting to order lunch, and I'm trying to be healthy and I get like chicken strips," Cuban told TMZ Sports that year with a laugh. "[Buffett] goes, 'You're going to be crazy over what I get,' and he orders a chocolate sundae with extra chocolate with a smoothie chaser."

Omaha native and financial blogger John Schmoll says he bumped into the two billionaires during their Dairy Queen lunch that year, and overheard Buffett extolling the benefits of long-term investing.

"What really stuck out to me is [Buffett] really walks the walk," Schmoll tells CNBC Make It of Buffett's investing philosophy. "We see it in the media when he does interviews on TV and such but here he was saying it to Mark Cuban."

For that lunch, Cuban picked up the tab. "I paid since I was the visitor," he told TMZ.

Cuban also has a little history with Dairy Queen: He worked at a restaurant in Coppell, Texas for a day in 2002, after Cuban told an NBA official that he "wouldn't hire him to manage a Dairy Queen."

Dallas Mavericks owner Mark Cuban shows off his first attempt at an ice cream cone at the start of his shift at Dairy Queen fast-food restaurant in Coppell, Texas.
Paul Buck | Getty Images

Following the comment (and a $500,000 fine by the association for "repeated public criticism of NBA officiating") Dairy Queen invited Cuban to try managing a store for a day.

Afterward, says Cuban, Buffett sent him a thank you note for the publicity.

Don't miss: Warren Buffett and Mark Cuban agree this one habit is key to success—and anyone can do it 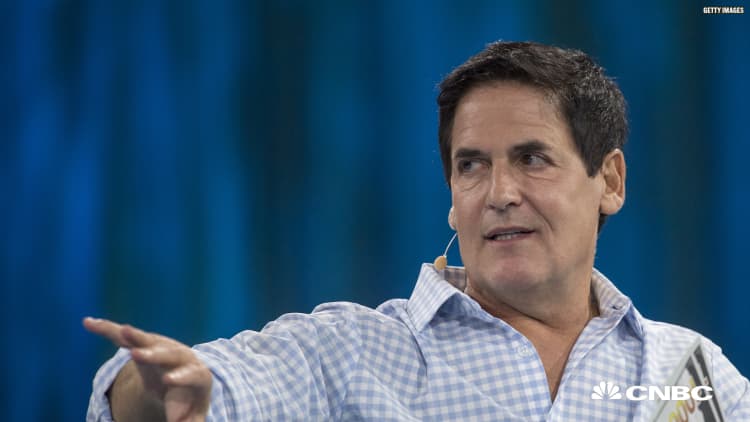