One coffee company is about to set up shop in New York, entering the city with an aggressive growth strategy at a time when others are scaling back.

Los Angeles-based The Coffee Bean & Tea Leaf, which has more than 1,200 shops globally, said Tuesday it plans to open 100 franchise locations in New York over the next 10 years. It will open its first stores in Manhattan this year.

"One of the things we are doing now is we are embarking on aggressive franchise growth in the U.S. to keep pace with what’s going on internationally," John Fuller, president and CEO of the chain, told CNBC.

About three-quarters of Coffee Bean & Tea Leaf's cafes are in Asia today. Of the 25 percent in the U.S., about 95 percent are in Southern California. The privately held company doesn't disclose its sales information.

“[New York] came to us," Fuller said. "We’ve had a lot of inbound interest for growing the brand, and we haven’t really put a lot of energy against it, which is something we are changing and doing now."

In many ways, there couldn't be a better time for Coffee Bean & Tea Leaf to grow in Manhattan. The city is finally looking to be a tenant's market again.

Commercial rents in New York slumped through 2008 and 2009, according to Jared Epstein, vice president at real estate developer Aurora Capital Associates. They spiked again around 2012, "forcing any food concepts really to struggle opening up new shops — due to the cost of doing business versus the sales they were bringing in."

Fast forward to today, and rents are finally starting to decline again in certain pockets of New York, Epstein told CNBC. "It's nice to see a downturn like this at times. It allows the creative to come back into these neighborhoods."

Last year, when real estate developers were having a hard time landing new retail tenants in New York because of sky-high rents, coffee companies and quick-service restaurants like Chipotle Mexican Grill "were the saving grace" as far as deals went and "the only guys keeping the lights on," Brandon Singer, a retail broker for Cushman & Wakefield in New York, told CNBC.

"The fact the rents are now declining — that's what creates the opportunity for these players to come back into the market," Epstein said. "And it's great for the city. ... [Food-and-beverage concepts] provide places for people to meet."

Meanwhile, coffee giant Starbucks has seen its growth slow in the U.S. as it oversaturated the U.S. market with more than 14,000 locations. Next year, it — three times the number it usually closes annually. Many of its locations, particularly in big cities, are cannibalizing each other's business, the company has said. Although Starbucks hasn't disclosed any of the locations it plans to shutter, it's possible some will be in New York.

This comes on the heels of Starbucks' closing of 379 Teavana shops in the U.S. earlier this year, some of which were in the New York area.

Other national rivals in the coffee space in New York include Dunkin' Donuts, Joe & The Juice, Gregory's Coffee, Pret A Manger and Peet's Coffee and Tea. There are also plenty of local, mom-and-pop players that could likewise benefit from a Starbucks retrenchment.

Despite the large number of players, industry experts still see room to grow in the beverage category. According to a recent poll from Siena College Research Institute, 62 percent of New Yorkers consume coffee on a daily basis, while 60 percent of those coffee drinkers have more than one cup per day.

Although sales are heating up, the boom in new coffee shops entering the market is cooling down. The total number of coffee shops in the U.S. is forecast to grow by just 2.17 percent this year, the slowest growth rate seen in the last six years, Mintel said.

In the last few decades, consumers have grown from coffee drinkers to caffeine connoisseurs. Instant coffee has given way to trendy specialty blends and a craving for high-quality single-origin beans. Today, there is an emphasis on transparency of sourcing and on bold, aromatic flavors.

Not a cookie-cutter coffee shop

Coffee Bean & Tea Leaf hopes to entice New Yorkers into its cafes with unique interiors that blend in with the neighborhood. Fuller described his company's shops as warm and cozy — not cookie-cutter or sterile.

In the past, Coffee Bean & Tea Leaf operated about a dozen cafes in New York. But a falling out with a franchisee ultimately led to those locations being shuttered in 2016, the company said. It didn't expect to return to the city so soon after closing the stores, but "pretty high demand" and an interest from Hudson River Coffee & Tea persuaded them to return.

Hudson River Coffee & Tea, franchisee of Coffee Bean & Tea Leaf, will help lead the chain's return to the market this year. It expects to have at least two to three locations open by the end of 2018.

At the helm is Pinchas Shapiro, an experienced franchisee who ran Manhattan’s largest Dunkin' Donuts/Baskin Robbins franchise. His knowledge of the industry and of the city is what makes Coffee Bean & Tea Leaf so confident that it can make a comeback in New York.

"The next generation isn't soda drinkers," Fuller said. "They are coffee and tea drinkers."

Watch: Starbucks raising price of a brewed coffee in most US stores 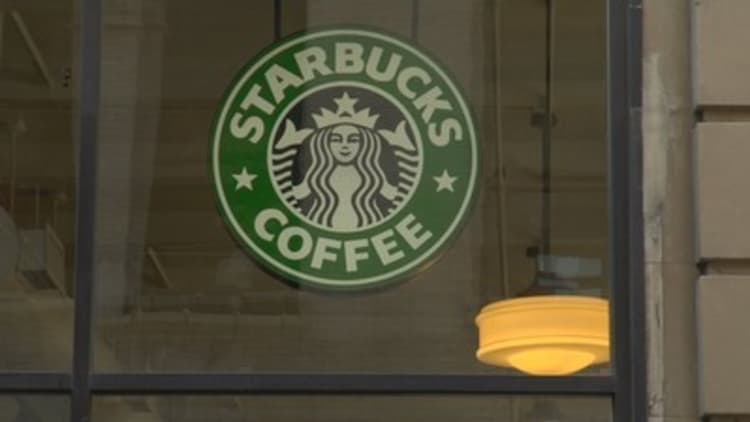 watch now
VIDEO0:3000:30
Starbucks hikes price of a brewed coffee in most US stores
News Videos