Germany's huge trade surpluses are a burden on its EU partners 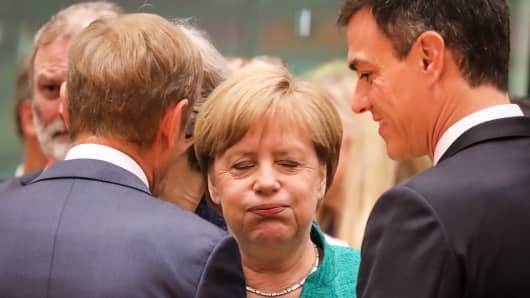 While few European states can pretend to share Germany's distinction of being a "country of poets and thinkers," none can rival German abilities to extract so much wealth from the rest of the European Union.

Last year, Germany posted a 159.3 billion euro surplus on its goods trade with other countries in the EU — one of the world's largest free-trade areas and a region with privileged access to German goods and services.

That's the way it's been since 1958, when Europe's common market opened up.

Germany's enormous EU bounty consistently accounts for two-thirds of its net foreign trade income in a market structure where Berlin remains an undisputed leader and a principal regulator.

This year looks set to mark another record-high EU trade income for Germany. The surplus during the January-April period was running at an annual rate of 175 billion euro — a 10 percent increase on the country's EU trades in 2017 — according to statistics from Germany's Bundesbank.

A country representing 28 percent of the monetary union's economy and living so grandly off the rest of its partners is a structurally destabilizing factor.

Right policies are no handouts

To this day, economists pointing out that fundamental problem have been ridiculed as hopelessly naive because, as the mantra goes, the European project has always been, and always will be, a political construct to keep the Europeans off each other's throats.

That charge is not only false, but it also bears the seeds of its own destruction.

Taking hundreds of billions of euros of purchasing power out of the monetary union, Germany makes it virtually impossible for other euro area economies to grow and create jobs as they struggle to bring down their public debts and deficits.

Instead of accumulating enormous wealth on the back of its euro partners, Germany should stimulate its domestic spending to buy more goods and services from them.

At the same time, Germany can relieve its growing labor shortages by offering jobs to more than 17 million EU people that are currently looking for work and a meaningful future.

And there is more: Recycling some of last year's roughly $300 billion trade surplus — through direct investments in the rest of the EU — Germany would boost economic growth and employment in other countries in the bloc, solve the problem of its shrinking manpower and adjust its overflowing external accounts.

Those would be appropriate economic policies for a country running large and systematic trade surpluses. Such policies would also even out the intra-area growth dynamics and stabilize the monetary union in a more homogeneous manner.

And none of that would be actions of EU solidarity loathed by the tight-fisted German government.

It is no wonder that the "everyone for themselves" attitudes have led to the revival of nationalism, alienation from the European project and an increasing popularity of "my country first" slogans — even in places like Italy, where the traditional idea of a united, peaceful and prosperous Europe inspired generations.

Germany's dogmatic imposition of fiscal austerity on recession-ridden EU countries and its frightening handling of Greece have been painful examples of absurd and insensitive policies. It has also strengthened the hand of Euro-skeptic political movements, such as the "Italy First" government in Rome which is hostile to the EU.

The last straw was the German attempt to dump its self-inflicted and unmanageable immigration problems on the rest of the EU. What we are seeing now is that what goes around comes around. The mismanagement of the EU economy and the calamitous immigration blunders have led to Germany's escalating political crises.

German Chancellor Angela Merkel's conservative alliance, made up of the Christian Democratic Party (CDU) and the Bavarian Christian Socialist Party (CSU) — together unofficially known as the Union — is falling apart. The latest opinion polls, reported last Thursday, show that the Union finds favor with only 29 percent of voters — a record low and down one percentage point from a previous poll in early July.

The Union's coalition partner, SPD (The Social Democratic Party of Germany), remained at its record low of 18 percent, which means that only 47 percent of Germans are ready to vote for the current government coalition.

Germany now has a federal government with a dismal approval rating of 25 percent in a recent poll and no parliamentary majority if an election were called today.

Particularly serious is the situation with the CSU party, which two months before the elections in Bavaria on October 14, was polling at 39 percent and looked almost certain to lose control of the state government.

A new, and probably terminal, government crisis could erupt at any moment.

Merkel keeps insisting on a "European solution" — which does not exist — to an intractable immigration problem she created. Her bitter opponent, the powerful Interior Minister and leader of the CSU, Horst Seehofer, wants a radical and expedient "national solution" because the neighboring states Austria and Italy don't want to cooperate for fear of getting stuck with migrants that Germany intends to throw out.

The historian Ludwig Dehio famously said that, after the founding of the German empire in 1871, Germany was "too strong for a balanced Europe, but too weak to dominate the continent."

Mercifully, the dilemma that led to two world wars in the last century seems to be a thing of the past as a result of the EU.

What is missing is a German leadership deeply committed to the European project as was the case with previous chancellors such as Konrad Adenauer, Helmut Schmidt and Helmut Kohl, who helped usher in European reconciliation and set Europe on the way to a common currency.

Under the current leadership, Germany is a weakened and deeply divided country. Its excessive, by far the world's largest, trade surpluses are a burden on its EU partners.

Its economic policies are not conducive to stability, growth and employment creation within the monetary union and beyond.

We have to hope that the next generation of German leaders will understand that it is in their best interest to run a more balanced economy that will promote shared prosperity for the EU as a whole.

Commentary by Michael Ivanovitch, an independent analyst focusing on world economy, geopolitics and investment strategy. He served as a senior economist at the OECD in Paris, international economist at the Federal Reserve Bank of New York, and taught economics at Columbia Business School.