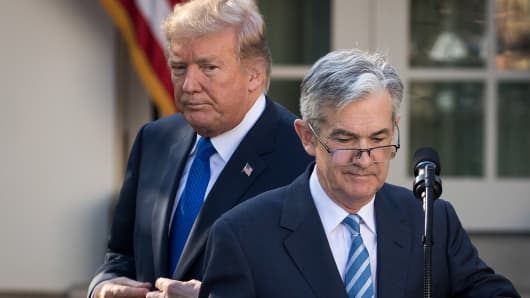 Drew Angerer | Getty Images
President Donald Trump looks on as his nominee for the chairman of the Federal Reserve Jerome Powell takes to the podium during a press event in the Rose Garden at the White House, November 2, 2017 in Washington, DC.

For some time now it has been my view that a conflict would develop between the President and the Federal Reserve concerning the Fed's tight monetary policies. Press reports in recent days suggest that this conflict has begun. This, of course, raises the issue as to whether the Federal Reserve should be an independent agency or not.

Virtually every commentator on the subject argues that agency should have this status.

It is interesting to note that the founders of the Federal Reserve did not share this view. There was a multi-year battle at the time the Fed was created that lasted literally from 1907 to 1913. The conflict centered around the issue that an independent central bank would be run by bankers to the detriment of the nation and, therefore, the Fed, if created, should not be independent.

Roger Lowenstein, in America's Bank has done a superb job detailing this battle. Edward Griffin wrote the popular book The Creature of Jekyll Island, which in my view was poorly done, but clearly lays out the argument against an independent Fed. Moreover, Liaquat Ahamed in his masterful book Lords of Finance details how a small group of central bankers in the 1920s may have made decisions with disastrous results for the world economy.

The Financial Crisis Inquiry Commission created by Congress immediately following the crisis wrote a scathing indictment of a Fed that clearly did not see or understand that the system that it was entrusted to protect was melting down. Plus, many current Fed viewers, myself among them, believe that the Federal Reserve's policies following the crisis may have benefited Wall Street far more than they did the national economy.

Nixon through Bush I

Today's conventional wisdom, argues that Presidents have historically avoided criticizing the Federal Reserve. This fallacy is based on the actions of two recent Presidents Clinton and Bush II. However, any reading of history argues the opposite. Woodrow Wilson made sure that the Treasury Secretary and the Comptroller of the Currency were ex-official members of key Fed Boards. Harry Truman fought and lost an epic battle against the Fed. Lyndon Johnson, Ronald Reagan and George Bush I had troubles with the Fed. Richard Nixon gained total control of the agency. Jimmy Carter did not and paid a price.

Thus, if Donald Trump goes to war against this institution he is more in line with his predecessors than Clinton and Bush II. Trump is in concert with history while his two predecessor were not.

The numbers would argue that the President does have good reason to fight the Fed. The agency is now shrinking its balance sheet. It has dropped by $191 billion since October of last year. It will be cutting back by $50 billion per month soon. The Fed has raised interest rates 7 times since the fourth quarter of 2015. It plans to raise five more times if the "dot plots" mean anything.

The result is that money supply growth is plunging. Latest numbers indicate that it grew by 3.8% year-over-year and did not grow at all in the second quarter. The U.S. dollar is quite strong and currency crises have developed in countries in South America, Europe, and Asia.

Cost of debt is rising

For ten years the interest paid on the Federal debt has not been an issue. This is because the rough average cost of money to the U.S. government, according to the U.S Treasury, dropped from 6.5 percent on average in 2001 to 4.8 percent in 2007 to 2.4 percent at present. Consequently, the increase in overall debt was more than offset by the decline in the rate paid. Thus, the interest paid on the debt fell as a percent of GDP.

No longer. Now both the debt and the cost of that debt is rising. According to the Treasury, the gross interest on the debt could jump 18 percent this year and is headed much higher. Other debtors like the nation's largest cities are in a similar position. The cost of their debt is rising.

Higher rates in the United States is creating problems for nations across the globe. We may not be ready for another Plaza Hotel meeting in which the world tells the United States to stop tightening monetary policy but one is likely to come if this does not happen.

So, yes there will be a number of supporters of the president's fight to impact Fed policies. Moreover, once the conventional thinkers stop caterwauling about the Fed's independence and start looking at what the Fed is doing, they may begin to gravitate toward the President's position.

History and logic argues that a small number of men in an insulated agency should not be independent in making decisions that impact the whole nation. The record of these men has had some successes but some outstanding failures. They are not omniscient and they need to be challenged.