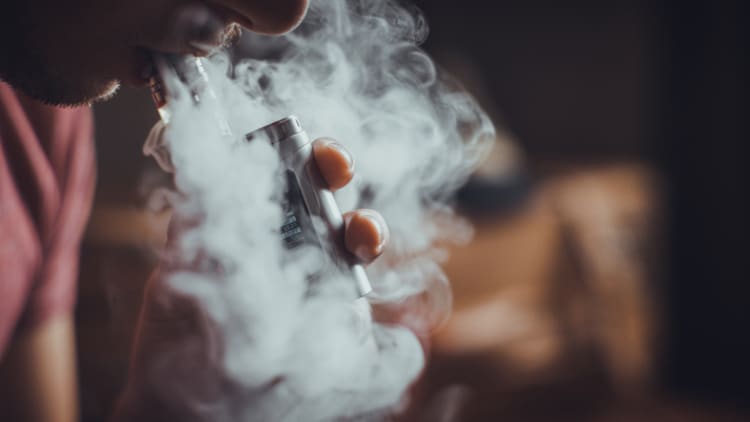 Teen use of e-cigarettes is surging so much that it's now threatening the future viability of its $6.6 billion in annual U.S. sales.

Over the past year, the number of high school students who have used e-cigarettes in the past 30 days has skyrocketed by about 75 percent, preliminary data from the Centers for Disease Control and Prevention's annual National Youth Tobacco Survey show, according to people familiar with the data. They asked not to be identified because the report isn't yet public.

That means roughly 3 million, or about 20 percent of high school kids, are using e-cigarettes, up from 1.73 million, or 11.7 percent in last year's National Youth Tobacco Survey. The complete data set is expected to be published later this year.

The e-cigarette craze has driven what's arguably the largest uptick of teen nicotine use in decades. That follows years of cigarette smoking among teens dropping to to record lows. Teachers and parents across the country have reported more young people using e-cigarettes, particularly one brand, Juul.

But the new federal data show just how pervasive these devices have become. Food and Drug Administration Commissioner Scott Gottlieb said the numbers are so staggering he's labeling youth use of e-cigarettes an "epidemic."

The FDA last week ordered five brands — Juul, British American Tobacco's Vuse, Altria's MarkTen, Imperial Brands' Blu E-cigs and Japan Tobacco's Logic — to submit plans within 60 days detailing how they will prevent teens from using their products. Gottlieb is threatening to pull flavored e-cigarettes off the market and possibly even requiring manufacturers to submit them to the agency for review.

The market for e-cigarettes started to flourish before the FDA expanded its authority to oversee the market in August 2016. The agency retroactively required companies to apply for approval to sell e-cigarettes starting this year, but then extended the deadline last year to 2022. 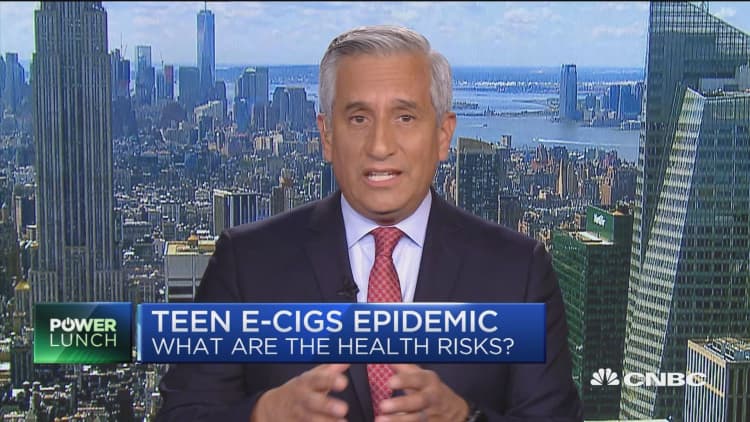 The growing popularity among teens has Gottlieb thinking about speeding up the application deadline instead.

Gottlieb believes in e-cigarettes' potential to assist the 37.8 million adult smokers to quit cigarettes. That includes a role for flavors.

"I think people should interpret the fact that I and others have made such a dramatic shift from our prior position with respect to these products as representing the fact that we have seen information that is deeply disturbing and startling in terms of the rapid rise of youth use over a short period of time," Gottlieb told CNBC in an interview Thursday.

Juul's dollar sales have surged 769 percent over the past year, according to the latest Nielsen data compiled by Wells Fargo analyst Bonnie Herzog. The San Francisco company sold $1.48 billion in vape kits and nicotine pods over the 12 months ended Sept. 8 — nearly 60 percent of the $2.5 billion for the entire category, according to Herzog.

Juul's sales have boosted the entire e-cigarette market enough for Herzog to recently up her full-year sales forecast to $6.6 billion from her previous estimate of $5.5 billion. Juul has been valued at about $16 billion after raising $1.25 billion in its latest round, according to a person familiar with the matter.

While these Big Tobacco companies own e-cigarettes, they might not be as much at risk since the bulk of their sales still come from cigarettes. The other four companies the FDA is targeting have sold $940.3 million of products over the past year in the U.S., according to Nielsen data. 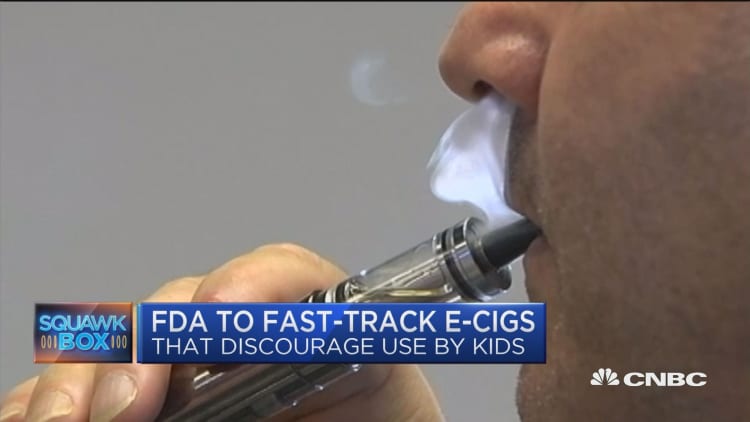 Still, a regulatory crackdown could threaten the industry's growth. However, Gottlieb told CNBC his door is 'very open' to companies who want to introduce e-cigarettes with new features that prove to make kids less likely from using them.

Flavors, including creme and mint, accounted for about 90 percent of Juul's sales in recent data. That leaves Juul vulnerable to regulators' warnings of pulling flavored products from the market.

Yet Juul is already looking overseas for growth. It's already launched in Israel, England, Scotland and Canada. It's also eyeing other international markets, including Asia.

WATCH: How Juul made vaping cool and became a $15 billion e-cigarette giant